in the garden, parsley and rosemary.

She said she’d be right back,

and he said nothing.  He was dying,

and didn’t want his daughter with him.

There was something about the way

she sat in silence next to the bed

that made him want to turn his head.

And he knew if he did, she’d ask him

if he were in pain, and her concern

troubled him.  He knew when he died

she’d mourn for him, and her mourning

would be brutal.  Her heart was tender,

and every misery touched her hard.

Dying, he didn’t want to think of it.

He wanted to be free of the mourning world,

free of everything, free of  all the sadness

that woke him early every morning,

and seemed to sleep at night but never did.

He wanted only to think of the poem

he burned because he knew finishing it

would have brought misery to Ann,

but he loved thinking about the poem,

and so he lay there, dying and thinking

about the poem he burned in the fireplace.

Its first line?  Wasn’t it, “In His bright day, 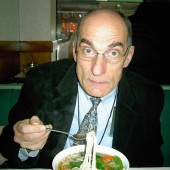