I was with Tyler the first time I jumped off the bridge. On the last day of eighth grade, we followed the river until we reached the town’s only traffic light: a caution signal in front of the bridge. Its steady, yellow flash signaled the division, warning of what lay across. The separation between the two groups was openly acknowledged, carved out like a scar by the Hudson. Most students lived east of the river, in rust-stained trailer parks or single-story homes with untrimmed yards and shutters drooping like butterfly wings. They were the ones playing Russian roulette with a full barrel. In a decade, they would still walk the town’s crumbling roads, sit beneath the shadows of neglected gas stations and boarded-up pizza shops, and steal glances at the other side of the river. On the west side were the upper-class students, the kids going to college, the kids who would one day be free of the stagnant town. I was one of them.

Tyler lived across the bridge, in a squat brown house with a decaying front porch and, nestled in his overgrown grass, a blue school bus on cinder blocks. He and I became friends when he moved upstate in sixth grade. We were vaguely aware of the separation which lingered between us. Often we’d fight and I’d make jokes about his house or his clothes or how he always showed me the same yearbook picture of his only friend from his old school.

We stepped over the railing of the bridge and onto a cement ledge, knotting our fingers through the chain-link fence behind us. The water was a dark canvas, rippling and streaked with sunlight.

“I heard that if you land right, it feels like falling through glass,” Tyler said. He jumped first and I followed, watching my reflection in the water grow until it shattered.

We swam to the shale-covered bank and walked back up to the bridge. Taking one final look at the river, we parted ways. Tyler headed east, towards a strip of brick buildings covered by graffiti. I headed west, back towards the caution light, blinking in the center of town like a beacon to lost travelers.

I had gym class last period and, if I got to the locker room early enough, some kids from the period before would still be milling around, trying to avoid their next class. The imposing summer heat coerced the school into leaving the lights off in the locker room to save on air-conditioning. The only light seeped in from an opaque window on the back wall.

I sat on a bench in the center of the locker room and realized I wasn’t alone. I could faintly make out Tyler’s face in the sink mirror as he washed his hands in the dimly lit shower area. Untidy brown hair hung in strands over his glasses like melted candlewax. His eyes, green as the river, flitted from me to the mirror. We’d drifted apart since middle school, but there wasn’t any bitterness between us. We were simply memories smudged by the end of a number two pencil. Even so, a comforting reality remained: I lived on the west side and he lived on the east. I was the winner and he was the loser. He spoke first.

“Hey, do you have a number I could reach you at?” he asked, the words trickling out nervously. “It might be cool to hang out this summer before you go away.”

Reluctantly, I reached for my notebook, saying, “Yeah, one second.” I convinced myself a hollow gesture would be enough for him to leave, but he stayed there, curling the scrap of paper I handed him. I looked around, hoping other students would come in.

“I’ve been thinking a lot about when we used to be friends,” he said. “I miss it. I was so much happier then.” His eyes were wild; his face was a cracked-mirror, each shard reflecting a different shade of his misery. “Do you remember that friend from my old school? I moved here because of him. When we were twelve he called me and said he was going to shoot himself, right there on the phone. All I heard was the line go dead.” He lifted up his shirt to reveal a fleshy, pink scar carved across the side of his chest. “I’ve tried to kill myself twice since and I think I’d be so much happier if we were friends.” Tears fell from his face and dotted the dirty linoleum floor as the bell rang. I sat, motionless, while students shuffled in.

Soon the locker room became crowded, lively with bustling bodies and a resonating din. Students from both sides of the river stood in the cramped area. An outside observer would be totally unaware that half of them were forced to suffer because of obstacles outside of their control.

The only time Tyler called was a week after graduation, the last time I saw him. It was night time and stars had spilled across the sky, blinking soft and yellow. Sometimes I still imagine him listening to the line go dead. 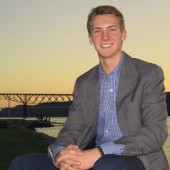 Derek is a fiction writer located in the tiny town of Stillwater, New York. He enjoys movies without climaxes, sit-coms without laugh tracks, and music that puts most of his friends to sleep. His work has also appeared in Crab Fat Literary Magazine and The Mosaic.