And you do. For there are so many other doors and so many corridors that do lead places, and they circle back upon themselves sometimes, and the corridors lead to hundreds of new doors, and you run along the corridors discovering with a keen breathlessness all that is contained inside this labyrinth of your head. And sometimes you move for weeks in a single direction and do not come to the end of a corridor, and sometimes you sit for weeks in a single room and the wallpaper is so beautiful you think you’ll sit there forever, gazing up at its psychedelic patterns and knowing the labyrinth extends endlessly all about you.

And you try not to think about the door that doesn’t lead anywhere. Of course you see it sometimes, when you’re not exploring. It’s right there at the beginning, in the hallway of your mind, the largest and most imposing door of all. You say to yourself: Ha-ha! Look at the big bad door that doesn’t lead anywhere! All sad and alone all by itself! And then, sticking your nose up at the door, you’ll skip back into the labyrinth and amuse yourself in one of the rooms.

And the door that doesn’t lead anywhere doesn’t answer you. Sometimes you think it is watching you but it never has anything to say.

And sometimes you’ll get in moods. You’ll get in moods where you’re curious about the door, you want to touch it and examine the surface. You recall a time when the door seemed indestructible, when the oak was of a density such that the surface was smoother than marble. The rivets in the oaken panels were silver once, you recall, and the girders where they emerged from the wood exhibited not a single blemish nor spot of rust. And now when you look up close at the door you see little cracks in the surface, tiny little fractures in the direction of the grain. And there are new post-it notes beside the door: This door is built to last! And another: Do not gaze at the surface of the door but go into your favorite room and gaze there at the surface of the wallpaper.

And you do. For though you have been traveling years through the labyrinth there are certain stretches–certain corridors and rooms–that you like spending time in because they are familiar and warm and you like the textured patterns of their wallpaper. Some of these rooms you share with others. And sometimes groups of you–two at a time, or sometimes four or five–will go exploring through other corridors, and other rooms, but mostly you stick to the warm rooms and the corridors you know.

And then one day, walking along your favorite corridor, you stop, and shiver, for something cold has entered the labyrinth. You walk in the direction of the cold air and you realize it is coming from the door that doesn’t lead anywhere. You go over to it and look at it and there is a large crack in the surface, a breach in the surface of the door. Beyond it, in that sliver of blackness, you think perhaps you will see something–an object or a face or the suggestion of some geography. But there is nothing, there is nobody. Freezing cold air is rushing through the crack. So you find some pieces of wood, and unfortunately there is no strong oak anymore in the wood stores of your head, just firewood and driftwood and fragments of rotting balsa that seem spongy between your fingertips. But that’s all you have so you make do, you take a few pieces of wood and you find a few nails–they too are rusty–and you hammer some wood into the door. There’s a draft when you’re finished, but it’s slight. And there are new tiny cracks where the nails have gone in, but no matter. And there are new post-it notes by the door: Great job, that door is solid! And another: I cannot even feel a draft. And yet another: Pretty handy with a hammer and nails, eh?

And so that’s all fine and you go back into the labyrinth and it occurs to you now that there are two rooms you really like, and there is a lovely stretch of corridor that connects them, and most of your days you spend decorating the corridor, and decorating the two rooms, and thinking long and hard about the wallpaper you want. You wonder: Is this wallpaper really right? And: What is the wallpaper that will make these rooms most warm? For it is there, in the labyrinth, an indisputable coldness from the door that doesn’t lead anywhere. Again it is admitting a draft, and again you go out and fix it, but the materials at your disposal are growing limited. The driftwood is depleted, the oak is long gone, and it’s mainly twigs now, piles of small twigs and branches in the corners of the wood room. So you gather up the twigs and your nails, too, are depleted now, and so you busy yourself with tying the wood in small bundles with lengths of twine and pieces of string, and you take those bundles and you wedge them into the cracks of the door that doesn’t lead anywhere.

But it doesn’t work very well, these bundles. The twine gets dry and brittle, and occasionally snaps, and some of the twigs come clattering into the labyrinth and some of them fall out through the cracks of the door and are gone. When that happens you content yourself with wedging individual twigs in the cracks of the door, which doesn’t stop the cold air from entering, but at least means there is something shielding you from the blackness that waits on the other side.

You spend a lot of time sitting in your favorite rooms and pacing the worn tracks of the main corridor. It occurs to you now that you do not like the wallpaper, it is too pale and morose, so you busy yourself with taking it down and putting up a new variety covered in sunflowers, pumpkins, rainbows and daffodils. You erect a stepladder in your room and try to put up the wallpaper while the freezing cold air from the door that doesn’t lead anywhere is nibbling and tickling your ankles.

In the middle of the night you hear it, an eerie faint whistling sound. It is coming from the door that doesn’t lead anywhere. The twigs in the cracks are no longer, they have been sucked through the door into the night. And there is nothing else to use in the woodshop of your head, there are no materials at all inside the labyrinth.

But wait, you think. It isn’t true! There is the discarded wallpaper in your room, and a few objects besides. So you go and fetch the yellowing wallpaper and you plaster it over the cracks, and for a few moments it seems to work but quickly turns to dust. And you go and collect the implements from the kitchen–a saucepan, a teapot, a wooden spoon–and you try and fit them into the cracks in the door but they’re all the wrong sizes and fall into the night.

And you think about what you can do.

And you take a step back from the door that doesn’t lead anywhere–perhaps you will go to your room and strip the new wallpaper from the walls–but when you step back there are hundreds, literally hundreds, of post-it notes. They do not merely have messages on them now but childish small drawings of rainbows and smiling sunshine faces, and hearts. Ruffled by the gusts of the freezing air, it seems that they are waving goodbye.

And one of the notes reads: Do you remember when we walked for days along that beautiful corridor and we thought it would last forever, you and I?

And there isn’t time to read them all for the door is gathering its breath. They lift, the post-it notes, they lift from the walls beside the door that doesn’t lead anywhere and dance in the cold air like a thousand paper butterflies. There are hearts wheeling in darkness, sunshine smiles disintegrating, and the word LOVE is there, spinning like an angel, for a moment perhaps triumphant against that night of limitless darkness that finally beckons, and tears the door from its hinges, and engulfs you. 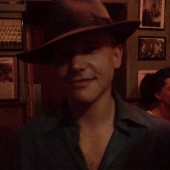 Toby Donovan is a young writer living in New York City. He was educated at St. Hugh’s College, Oxford, where he read Modern History and wrote a thesis on the use of the death penalty in 18th century England. He has been a permanent resident of the United States since 2008, and has also lived and worked in Australia, Singapore, and the United Kingdom, where he was born. He received a National Award for a piece of music he composed for gamelan orchestra – Pharaoh’s Grave – which was performed at the Royal Festival Hall in London and broadcast on BBC Radio.