The Father of Sighs The father of sighs sires many sighs. He is fertile if men are fertile, productive if men are productive, unfaithful if there is something deserving of faith, something within himself worthy of faith, for siring sighs is an asexual act, a self-sexual act, and so he is unfaithful to whatever it is within with which he sires the sighs, for he sires with many such internal whatevers. Sighing is like sex only better because there is no mess. With a sigh the exhalation is only air. Cleaning up sex mess makes him sigh; even cleaning up sex talk makes him sigh. So if he will sigh regardless he may as well sigh without the sex and avoid dirtying his sigh, compromising his sigh with stimuli, attributing to it a libidinous motivation when the reason to sigh is to sigh. He sighs. An uplift to his spirit, a lungful exiting his mouth. The sigh is chopped by the ceiling fan into hundreds of little sighs. Perhaps the sigh regains its integrity and rejoins with all the flensed and dispersed shreds of itself, or perhaps these shreds of sigh unite with tatters of other sighs to form a single comprehensive sigh, or if not one perhaps a supportive community of sighs that, after counseling, conversation, medical attention, and intervention when a member sigh wants to sigh its own sigh (the sigh must think of the greater community; there is only so much air and there are so many sighs in this house already, so many exhalations, so few inhalations remaining to be inhaled, and there is a law, or is it only an unspoken pressure, that no sigh is allowed to sigh, or else the guilty sigh will be subsumed by the greater sigh and cease to have any identity of its own, any purpose, any reason to be, which it won’t, it won’t be, all it will be is a component of a greater being, which isn’t a bad reason to be, or to not be since there is no it once the sigh sublimates to the elevated existence, mixes with the common consciousness, and homogenizes with the volumetrically larger sigh achieved through personal failure and communal triumph, though volume is a poor way to quantify gas. There you go little sigh, an action for you to take so you don’t sigh: count the number of molecules in this bigger sigh into which you will be assimilated if you do sigh. Count and count and do not sigh. It’s okay if you do sigh, all those who have come before you have, they are all in this sigh, a collective of sighs, except not a collective because they lost their individual colors and became one enormous incorporated sigh as colorless as air. But try for a while, do, encourages the father of sighs. You’ll last until the pressure of the newborn and toddling sighs behind you ((the father of sighs is always siring more sighs who smush your face against the translucent stretched skin of the one great sigh that has swallowed all your elder siblings)) squeezes an almost imperceptible sigh out of you. And once you’ve sighed once, you are a sigh who has sighed. There you will be, ending, sighing, becoming nothing, lost within this evergrowing sigh until one day, you hope, or you would hope if there were you, the father of sighs ((at this moment siring sighs, his every word a sigh, every exhalation a sigh, every you a sigh, you were a sigh, now there is no you, you are nothing, every repetition begets a sigh, he sires more yous by sighs, even now without cease, all the yous are building, building in this house, accumulating, waiting in closets, under beds, rammed into every nook and cranny, squeezed smaller and smaller, compressed, because there is no more space for sighs except the space already occupied by sighs and he has to breathe in a sigh in order to sigh, in order to breathe, which makes the sigh he exhales twice as concentrated, and eventually all the sighs are twice as concentrated, now his sighs are four times as concentrated, and you can see where this is going, his sigh concentration is a function of 2 to the nth power, 2n, or perhaps 2n-1, or perhaps not exponential at all, math makes him sigh and how long can this continue, to infinity?, you hope not, whichever you is at the cusp of being consumed by the greater sigh and is at your final individual thought, which is if the pressure of a gas surpasses a threshold the gas converts to a liquid if not a solid and no one can breathe a liquid let alone a solid, meaning the end of the father of sighs and his sighs)) opens a window and releases all his sired sighs, or his one complete sigh, to the sky. The house of the father of sighs sighs. You are free. All the yous are free to expand and become cloud or greenhouse gas or whatever sighs become in the sky. He makes himself a father of sighs without sighs. He makes himself nobody. He watches them go, watching air rise, watching nothing.), sighs. He closes the window. His breath clouds the pane. He sighs. 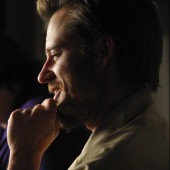 Nick Stokes’ novel AFFAIR is currently in serial publication online at The Seattle Star. His shortish prose and fictions and nothings and undefinables have been published by Mixer Publishing, Waccamaw, Prick of the Spindle, City Arts, Word Riot, Opium, KNOCK, and Exquisite Disarray Publishing. His plays have been produced, supported, and developed by Northwest Playwrights Alliance, Seattle Repertory Theatre, 14/48 Theater Festival, Theatre Puget Sound, Blood Ensemble, Open Circle Theater, Tacoma Arts Commission, and others. He has been awarded Artist Trust's Camano Island Residency, a GAP award, the Rannu Fund Prize for Writers of Speculative Literature, and a Hugo Writers Award. He lives with his burgeoning family in Tacoma; he packs mules in the backcountry of Montana; he's virtually at nickstokes.net.