There’s a story about veteran professional wrestlers Cactus Jack and Terry Funk. They entered an arena, only to discover one of the smallest crowds they had ever encountered. One thousand folding chairs arranged in neat rows to surround the ring, and fewer than fifty of them were occupied—hardly enough to fill the front row.

Other wrestlers had complained about the small house, and proceeded to put on lackluster performances—biding their time in stare downs and headlocks before going through the motions of the preplanned finishes to their bouts.

But Jack and Funk were different. Where others saw the absence of people, these men recognized the opportunity to entertain the small crowd that much more profoundly. Jack purportedly gazed upon the empty arena, and turned to Funk, wide-eyed as a spoiled brat on Christmas morning, and said, “Look at all the chairs.”

Madness ensued. They delivered body shots with chairs. Headshots with chairs. A choke in which Funk fed Jack’s head through the back of chair and folded it to cut off air. A body slam across the fifth row of chairs. A piledriver onto a stack of seven collapsed chairs.

In recognition of the men’s ingenuity and commitment to their craft, the wrestling industry embraced the Funk-Jack scale (commonly abbreviated the FJ Scale, colloquially pronounced the F’Yeah Scale) to evaluate the overall degree of effectiveness in different foreign objects—objects extrinsic to the human body and the ring itself—in the art of professional wrestling.

The concept of a foreign object depends upon several factors—believability the object is a threat, ability of different parties to use the object, and, of course, understanding that the object would not inflict irreparable harm or death upon a victim. The purpose of foreign object is to incapacitate a performer—not kill him or her.

Examples of level-zero foreign objects include the handgun used by Brian Pillman in his home-invasion storyline opposite Stone Cold Steve Austin—contextually appropriate given each performer’s character, but nonetheless appropriately criticized and a cause for several advertisers to pull support from the WWF product at the time.

Level-one foreign objects are suitable for particular matches and situations, but quickly become inappropriate outside of these contexts. Consider the tawdry pillow fight “matches” in which female performers were objectified in the late 1990s, and in which pillows were, of course, the weapons de jour. The pillows were sensible—even necessary—in that very particular setting, but generally understood to be silly and ineffectual. Similarly, striking someone with an urn or the lid of a casket, while more believably effective as a foreign object, nonetheless comes across as a non-sequitur for most characters other than The Undertaker.

Some foreign objects are fitting for a variety of situations and characters, but nonetheless dangerous to the actual performers. For example, the ring bell itself is consistently available at ringside, a believable weapon, and releases a pleasing ding when struck appropriately, but is also dense, heavy, and surrounded by sharp edges that make gratuitous use likely to result in legitimate injury.

Ah yes, the level-three foreign objects—those that are safe to performers, but nonetheless look smashing (excuse the pun). Wooden banquet tables have emerged as model level-three weapons. They grow tiresome with over-exposure, but when used little more than once per week in televised programming can produce an electric response. Tables are necessarily available at ringside for announcers, timekeepers, and merchandise vendors. Tables produce a lovely cracking sound and terrific visual at the sight of them (and the wrestler who was just prone upon one) broken in two. Nonetheless, level-three foreign objects such as this do require some set up and run the risk of breaking at inopportune times, or not breaking when they are intended to.

As we move closer to the platonic ideal, we arrive at those foreign objects which are not only effective, but poetic in their application. For example, there is the championship belt—the symbol of excellence and storyline target of each grappler, marked with heavy gold plates that can, too, be used to batter a wrestler into unconsciousness, betrayed by the very object after which he lusted.

There are but a handful of foreign objects available at any wrestling performance, believable as contextually appropriate weapons, and accessible to any performer. So we return to the steel chair and its kin—lining every ringside area, clearly visible from a distance, moderately heavy, definitively hard. They even generate a suitable clanging sound upon collision with a wrestler’s skull.

It is, at this moment in history, difficult to conceive of a foreign object more perfect than the steel chair, but that does not mean we should lose hope. Technology advances! Just as our kin in in the 1960s would not have been able to conceive of Paul E Dangerously waffling men with his oversized cellular phone, or Alexandra York passing her laptop computer to her charges to incapacitate opponents, there exists an infinite potential for future foreign objects to fit particular situations and further revolutionize the industry. Imagine—just imagine!—that as recently the early 1993 no wrestler had conceived of jumping from a ladder to attack his foe, much less using that ladder as a battering ram.

The future truly is an awesome spectacle. 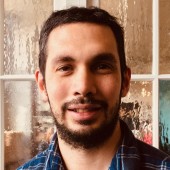 Michael Chin was born and raised in Utica, New York and is currently an MFA candidate in creative writing at Oregon State University. He won the $1,000 2014 Jim Knudsen Editor’s Prize for fiction from the University of New Orleans and has previously published or has work forthcoming in over thirty journals including The Normal School, Word Riot, Gravel, and Bayou Magazine. Find him online at miketchin.com and follow him on Twitter @miketchin.