The God of Unknowable Reasons The Guidebook says that the temple was built on a circular plan and for reference, includes a measured survey, but what little remains today, takes no real form whatsoever. Not to be outdone, the Diary carefully documents several dozen Turkish Pines, Laurels and Kermes Oaks crowding for space in broken clusters around a flattened, perimeter or well-tramped earth. The Diarist includes a list of the chief headlines taken at random from the old copies of Le Monde and Corriere del Marche that he found in the scrubby bushes near the walkway. Then he spends two pages in a supposedly exhaustive accounting of spent ammunition—from antique .69 and .704 caliber smooth bore musket balls, to .792 mm Mauser cartridges. At some point, the retreating soldiers had hung an effigy from a makeshift gallows and, according to the Diarist, the ground was quite littered with spent percussion caps and the filth of a hastily broken camp, including the wreckage of several 1916 Mosquetons, apparently cannibalized in an attempt to construct one that would work. But now, all these years later and except for the off-white stump of a single, carefully fluted marble column, the only real feature of the temple which remains is the broken base of what was once a low, red sandstone altar, one that had been defaced by several centuries of bored travelers. The guidebook laments that even the Temple of Dendur, with its tedious dates and unremarkable names boasts a better quality of graffiti. Indeed the Temple of the God of Unknowable Reasons is unremarkable in nearly every aspect, but you check it off from your list with some satisfaction.

You were both tired when you arrived at the dusty slope and since the column’s severed end was just right for Lora’s perfect, heart-shaped ass, she sat down and took a can of soda out of her backpack. Looking over the rise and out at the Aegean, she sighed. To cheer her up, you sang “Winter Wonderland,” but she was having none of it. Placing the soda can carefully to one side, she kicked off one of her white Reeboks, peeled off one tennis sock and unhappily examined her toenail polish. From across the site, you could see a small Leopard snake sunning itself.

Somehow a voice draws me back.

—It makes one’s will enough receipt from the remainder of the body.

I have no idea what anything means, so I just remain silent. 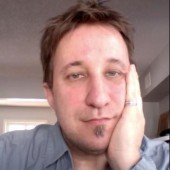 Carl James Grindley grew up on an island off the West Coast of Canada, and studied in the US and Europe. He has taught creative writing at Yale University, and works at The City University of New York. Three of his novellas were published in 2008 by No Record Press under the name Icon. He has upcoming work in A Bad Penny Review, Eunoia Review, and Anastomoo. The author would like to thank The City University of New York's Research Foundation for its generous support.