The Historical Literary Epic Meets the Post-Apocalyptic Future: A Review of The Doors You Mark Are Your Own by Okla Elliott & Raul Clement

The Doors You Mark Are Your Own
By Okla Elliott and Raul Clement
Dark House Press, 2015
724 pages, $11.37
Reviewed by Daniel Haeusser The Doors You Mark Are Your Own is the first part of an ambitious amalgam of literary fiction spliced with post-apocalyptic and historical genres. Written by Elliott and Clement with the conceit that they are ‘translating’ a historical account written in ‘Slovnik’ by the fictional Aleksandr Tuvim, the saga reads on one level as an engrossing biography and social commentary of a speculative, future city-state. On another level it contains rich, interconnected character-driven narratives. Balancing epic world-building and other science fiction genre traits with literary depth, the authors take some of the best elements from across literature to fashion an addictively entertaining novel.

An homage to Russian writer Aleksandr Solzhenitsyn and Polish poet Julian Tuwim, the character of Aleksandr Tuvim is a poet laureate of Joshua City who, after release from a state labor camp, receives commission from the totalitarian leader General Schmidt to write a history of the city-state. General Schmidt surprises the understandably suspicious Tuvim by granting the writer unrestricted access to archives, including the general’s private collection. Tuvim takes up the challenge, with this novel being the first part of his project, a balance between the personal and the official to reconstruct the past:

I have been charged with writing a history of Joshua City—to tell the stories of the people, to preserve an image of the way things were—and as explained much earlier in this ever-growing document, I have chosen to what I call a novel-history as the form for our story.

The walled Joshua City, situated by the Baikal Sea, is one of seven city-states that have formed after the apocalyptic calamity that split the advanced civilizations of the Before-Time from the novel’s present day. Led by Mayor Adams, Joshua City’s citizens face growing problems of clean water, outbreaks of disease, socioeconomic disparity, and an increasingly repressive regime.

Within this troubled sociopolitical environment, Nikolas Kovalski and Adrian Talbot have started their medical studies as roommates at Joshua University. The two share an interest in finding ways to combat nekrosis and a passion for treating stricken patients. In these shared goals they forge a friendship, despite having disparate backgrounds.

Raised in an orphanage, Adrian is reserved, with a morality springing from convictions born of fiery religious faith. Nikolas, in contrast, holds ideals grounded in scientific rationalism, but is prone to activism toward realizing his secular principles. Adrian becomes like a brother to Nikolas, whose actual brother, Marcik, has left to join the Baikal Guard.

Turmoil brought on by the outbreak of war with the Ulani and the rigid grip of the Adams regime help lead each of these characters down separate paths away from their respective trainings. With little ability as a soldier, Marcek impresses with his talent for commanding, but his entry into actual combat doesn’t last long before he is captured and held in an Ulani prisoner camp.

Meanwhile, both Nikolas and Adrian abandon their studies. First Nikolas becomes involved with student activists. This leads Nikolas on a road to forming a more radical group, the Brotherhood of the Underground, which formulate revolution. The initial violent actions by Nikolas’s group unintentionally force Adrian away from the University. Unlike Nikolas, Adrian stays committed to his medical calling and joins a caravan where he finds his skills of service in an understaffed hospital outside the city.

Intertwined with the stories of these men, the novel follows a cast of secondary characters, including the engineer Abraham Kocznik, his actress wife Vivian Scott, and his coworker Jürgen. The inventor of an impressive rail system of trains and film industry technology that becomes co-opted for state surveillance, Abraham is caught between responsibility to Mayor Adams, his own ethics, and his responsibility as father. Finally, in the background of all converging events, there is a strange religious cult of nomadic assassins—whose handful of members each go by the name Messenger.

The plot of TDYMAYO resembles William T. Vollmann’s National Book Award-winning novel Europe Central, and features a cast of characters spanning from soldiers to technocrats to artists and includes revolutionary language reminiscent of Soviet communism while considering the existence of class division and inequality tied to politics.

But whose lives would be save? The poor? No, a transplant would cost a fortune. And there would be a waiting list for viable patients—and it wouldn’t be the poor who had friends powerful enough to move them to the top of that list.

The policing of a totalitarian state resembles many regimes in history and dystopian fiction. The marking of doors by Baikal Guardsmen or by citizens accusing neighbors of anti-Joshuan sentiment particularly echoes the Nazi Gestapo and the character of Jürgen bears similarities to Nazi scientists who turned sides and rationalized their involvement in atrocities.

I’m a realist. A scientist. I believe in the utility principle. We all act according to a version of it…There’s individual utility, which some people call self-interest. There’s situational utility, which is what [Schmidt] practice[s], I think. And then there’s universal utility, the greatest possible good for the greatest number of people.

In this way, though set in a post-apocalyptic future, the Baikal society seems historic. The technology and knowledge feel retro, as if from the early twentieth century when trains dominated and cardiology and other medical knowledge languish were undeveloped.

The issue of diversity in general—its importance, but lack, in Baikal society—are brought up in the novel. For instance, Nikolas is quoted as writing in his journals:

An effective and vigorous revolutionary movement is only conceivable if it includes diversity. The forced we oppose, as well as too many allied with us envision a normalized and predictable populace.

However, there is also an absence of diversity in TDYMAYO that is most obvious in terms of gender. The major characters are male. Secondary female characters do play vitally influential roles in what directions the major characters follow, but these women are never the focus. To their credit, Elliott and Clement do directly address gender inequality:

…’Did you know that the engineer of Larki Island’s first underwater train was a woman?’

‘Of course, in that backwards society, she was not allowed to publish her researches, so it had to be under her husband’s name…There is so much we must fix in this broken world.'”

It is clear that the authors recognize the issues of diversity, so it therefore feels doubly disappointing that some more prominent female characters weren’t found in the numerous pages of TDYMAYO. Considerations of diversity exist thus as a subtext, but don’t come through strongly in plot or character.

With such an epic scale of story, the authors have ample room to insert complexity for readers to discover atop the approachable, straight-forward style of their prose. Consistent with the Soviet inspirations to the novel, much of these deeper corners of TDYMAYO resemble themes and preoccupations found in Russian literature. For instance, the scale and plot of TDYMAYO calls to mind War and Peace, but the interactions between characters are reminiscent of Dostoevsky and his placing disparate personalities and philosophies together.

With the conceit of the TDYMAYO being that it is a translated ‘novel-history’, at its heart it ruminates on how language causes divisions, modifies communication, and is never wholly translatable. Elliot and Clement’s construction of the novel therefore is more than a mere aesthetic ploy to make it seem like nonfiction, it is a way to address the realms of language. Language also creates, here on one level a novel, but also within the novel a history based on memory and record. Like history itself, language produces a fabrication formed of both conscious and unconscious inclusions/exclusions.

It has occurred to me more than once that the novel itself is a form of surveillance. It monitors, it invades, it shows us things we would never otherwise see—the private chambers of our lives.

But there is no such thing as total surveillance, even in the novel. In life, there are always unseen moments, without kameras or listeners. We cannot steal the contents of the human mind…Though the novel can do this—and it does—it is also is an incomplete surveillance.

This passage, which in context compares the ‘surveillance’ of the novel to the actions of Mayor Adams’ Joshua City administration, is a good example of the authors’ skill at integrating deeper meaning and complexity into the familiar foundations of the post-apocalyptic SF genre.

With such tremendous balance, TDYMAYO should appeal to fans of basic genre enteratinment and literary depth alike. The story is one whose pages are easy to lose yourself in during the hot summer months. 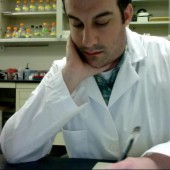