Kids at my Quaker high school were killers. I saw someone in the lunchroom, a fellow freshman, use an eyedropper to sneak lemon juice into another kid’s milk carton. When the target drank the soured milk, his assassin said, “You’ve been poisoned.” I heard about another kid who opened his textbook in class to find a note inside that said, “KA-BOOM! You’ve been bombed.” Any method the target could confirm was legitimate. We were on the honor system.

I was not a creative killer. I stuck to my plastic pistol, which I kept in the otherwise empty right pocket of my oversized army jacket.

While we stuffed the previous period’s books in our lockers, I asked my friend Elias Levy if he’d heard of the live-action role-playing game called Assassin. “Yeah,” he said, arms burdened with bag and books, “Fred Aaron’s my next target. How about you?”

I shot Elias in the chest. “Now Fred is my next target.”

I’d thought this new school could offer me a fresh start: a place where no one knew I’d always been bottom of the class in middle school, last to be picked for teams, liked-but-only-as-a-friend by any girl I dared ask to a dance. Elias had come from that same middle school. He knew that through 8th grade I hadn’t played sports and barely did homework. Uninvited to parties, I stayed home and watched The Rockford Files, Starsky & Hutch, Baretta. Anything with intrigue and gunplay.

If high school had tendered the promise of reinvention — a chance to be more like my fictional heroes and less like myself — it broke that promise. My grades stayed mediocre, gym remained humiliating, and everyone seemed to know each other already. It should have been hard to be invisible at a small private school, but I soon managed to fade into the background.

That turned out to have its advantages. Rebecca Fox stood at her locker, three down from mine. She wore dark eye makeup and bright red lipstick over a permanent pout. Her hair looked like she’d just stepped out of the shower and combed it wet. I pretended to struggle with my combination as I stared slantwise at the faded denim that cupped her bottom. She had scrawled all over her jeans with ballpoint pen in the shaded balloonish letters of subway graffiti. Another girl noticed that the latest addition said, “POLICE.”

If high school had tendered the promise of reinvention — a chance to be more like my fictional heroes and less like myself — it broke that promise.

I decided they must be talking about a band. I made a mental note to seek out their music, to love them too, to find a way to mention that love to Rebecca. Anything that would let me talk to her. But after I shot Fred in the cafeteria, I had to change plans.

Between classes, Rebecca smoked behind the school, but I had watched from a distance and knew that at the end of the day, she would leave by the front doors. I waited outside, across the street, shoulders hunched against the late afternoon chill of early spring. She left school alone and headed toward 3rd Avenue. I hung back, spying over the roofs of parked cars, sticking close to the wrought-iron railing that separated the sidewalk from the low, red-brick buildings of 16th Street. Before she could reach the avenue, I crossed back, slipped behind her, double-checked that no one was watching, and caught up.

“Hey, Rebecca.” She turned and started to smile, but a pink plastic disc from my spring-loaded pistol bounced off the black T-shirt fabric that stretched between her breasts. “You’re dead.”

She stomped her foot and hissed an expletive. She dropped her backpack to the sidewalk. I had no idea what to do next. I had only planned up to this moment.

“Where’d you get yours?” she asked, nodding at my pistol, still aimed at her chest.

I looked down at the gun. It fit my grasp perfectly. “They sell them on 14th Street.”

“That’s where I got mine, too,” she said, taking a royal blue pistol identical to mine from the bag at her feet. “Guess that was money wasted.” She looked up.

It was my turn to speak. “I gotta get going.”

Rebecca shrugged, waved, and walked away. She was gone by the time I realized I hadn’t asked for the name of her next target. I needed to get my head back in the game.

The next morning, I checked in with the ringmaster, reported that our circle of assassins was now one link shorter, and received my next assignment. Somewhere on his hidden list was the name of the kid assigned to kill me. To win, to be the last assassin standing, meant more than eliminating your targets; it meant staying alive while you did so. Few took it seriously enough to survive even the first attempt on their lives. They’d signed up because it sounded fun. That attitude was fatal.

My usual shortcut to school took me through the smoking alley, a narrow gap between the Quaker Meeting House and the apartment building next door. Kids huddled there on old wooden benches and shared Marlboros and Salems under iron-grated fire escapes. But now, even if I was late for class, I circled the block to enter school through the main doors, where it was harder to mount an ambush.

The ringmaster, the organizer of our lethal circle, was a bug-eyed upperclassman named Lucas Milner. After Rebecca, I stopped bothering to ask my victims who they hunted. I just went back to the source. Every time I reported in, Lucas would pull a folded sheet of loose-leaf paper from his jeans, cross another name off his list, and tell me my next target.

But on that final day, my last day as an assassin, he grabbed me by the lobby pay phone to update my assignment. It seemed my target had been eliminated during a botched attempt on a senior named Nick. According to Lucas, Nick and I had killed everyone else, and it was now down to the two of us.

“Oh,” Lucas said, wrinkling his nose, “he’s that slimeball who sits by himself in the smoking alley.”

For the rest of the day, between classes, I cased the alley from across the courtyard, scoping out my last target. He had long, greasy, dark hair, thick glasses, and a face full of acne. As the ringmaster had indicated, Nick sat by himself, huddled over a cigarette while the other smokers chatted and laughed, a buffer of several yards between them and him. He was skinny and tall, the height of a man. Like me, he wore an army jacket, but his fit better. Nothing about him suggested the skill of a killer.

In a school where ace students high-fived over test scores and college admissions, where the basketball team wore red sleeveless uniforms in the cafeteria and received praise or consolation from fans, where even the folk singer had his gaggle of groupies, and the D&D nerds had each other, Nick looked like he’d spent most of the last four years smoking alone, tuned in to an endless internal replay of insults.

How could this nobody have scored so many kills? He must have learned to wear their contempt as a cloak, to remain unheeded until it was too late. They had too much going on, Nick knew, to maintain vigilance, and he’d killed them off one by one.

But he’d never fought anyone like me before. I knew to study him, to strategize and assess the threat, whereas to him, I was no more than a name from the ringmaster scratched in ballpoint, some faceless underclassman he believed he could dispatch at his convenience.

I walked through the courtyard to the alley, hand in my pocket, finger on the trigger. Nick never looked up, just stared down at his cigarette, shoulders rounded, forearms resting on his thighs, utterly still.

I pivoted, aimed my pistol — and made a rookie mistake. I wanted him to see me, wanted him to watch me kill him, to know that he was powerless to stop me.

I said, “Hey, Nick,” and as he looked up, I started to pull the trigger.

I never imagined he’d be so fast. He launched himself at me, knocked my gun arm to the side, and tackled me to the ground. He was so much heavier than I’d expected. My nostrils filled with the stench of him, old sweat and stale tobacco, as we rolled among cigarette butts and grime. I didn’t see him drop his cigarette or pull his gun, but he held it now, aimed straight at my head. I angled away and heard his discs bounce off the concrete, inches from my ear. I grabbed his gun barrel with my left hand and aimed it away from me. His left hand clamped around my right elbow. I still had my gun, but it was pointed down the alley, toward two smokers who watched in silence.

I was able to turn my gun back toward him and fire into the side of his jacket. I doubt he felt that first shot, or the second or the third, but I fired disc after disc, a rainbow of bright plastic circles across his torso until they were shooting past the open folds of his army jacket and hitting his chest.

He didn’t let go, just leaned down into me, trying to pin the rest of me to the ground.

“You’re dead!” I trilled, my voice higher than I wanted. “You’re dead! You’re dead, god damn it! Get the hell off me!” I kept shooting and shooting, and he kept trying to pin me, and I realized I’d finally found someone more serious, more determined, more obsessed. All I could see was the looming blur of stringy hair, splotchy skin, thick and filthy lenses over lunatic eyes. And the thought came to me that I was in real danger. It didn’t matter that I’d won — Nick was not going to let me walk out of that alley.

And then, just as suddenly, he was off me. He stood, put his pistol back in his pocket, and said, “Yeah, OK, you win.” Then he sat, lit a fresh cigarette, and stared at the asphalt between his sneakers.

It would take days for me to accept that the game was over and nothing had changed, that Lucas would still stare past me in the halls, that I’d already gotten as close to Rebecca as I’d ever get, no matter how many times I listened to Ghost in the Machine.

I glared at Nick, hunched over his cigarette. Top assassin, I thought. My face burned. I willed him to acknowledge me, but he never budged.

Glancing at our only witnesses — two dirty blondes with lipstick-stained cigarettes poised between limp fingers — I thought for a half-second that they were smiling at me.

But then they snickered and looked away. 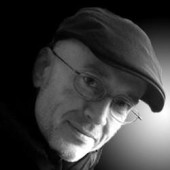 BK Marcus is a homeschooling dad, an essayist, and a storytelling coach. Look for his work at the Brevity magazine podcast, Silver Needle Press, Streetlight magazine, Newsweek.com, and on the public television show Charlottesville Inside-Out. His website is bkmarcus.com.