The Last of the Dragonflies

After sprinkling some of my father’s ashes into a blunt, butterflies gathered around my head, their wings tickled my ears as I lay at the edge of the river and licked it, dipped it in a half-empty formaldehyde container borrowed from the basement. Dizzy with sadness and euphoria, dancing with sunset reflections I listened to the crickets giving life to the embalming fluid as it drifted into my lungs.

The smoke sailed lower, borne down by the breeze as if by some nefarious puppet master pulling the final ethereal curtain over the scene, an obstinate purpled rippled demon which made love to the orange moon, all the while as fluorescent caterpillars come out from the dampened moss.

“What are ya doing down here Jay?” my sister asked.

She was little and didn’t realize Dad was a fraud, afraid of offering his body to the earth.

I handed her the fancy last wish of our father. His written instructions were to dump his ashes in the river, sell the house, and enjoy our lives. The elaborate labyrinth of his existence a tangled mess of strings, a miserable yet necessary business, all the while getting richer with the money of corpses, forcing us to commiserate with strangers willing to offer their everything to Dad; yet he would never trust his soul in the hands of another man.

“What ya smoking?” She asked.

The way the world came to his door, spent my whole life living in this funeral house adjacent to the water, watching the dead drift by like feathers on the surface, never knowing whether to curse it or burn it to the ground. Either or, yesterday filled the gallon gas cans to their brims and walked home a ghost, stuffed them in the back of his closet behind the trophies and bowling balls, all the while waiting for this opportunity, the house empty, that time of awakening when everything goes up in flames.

A dragonfly made love to her face. She aged ten years overnight. I handed her the blunt. The sun sunk beneath the mountains and the moon took over. I reached into the urn and tossed a handful of ashes into the water and began to repeat the process, saying a little prayer, when instead of releasing the remains into the air, lifted them into my mouth.

A dragon was having an orgasm in my esophagus so I fed it some more fuel. Handfuls of ashes swallowed as fast as possible, offering them to my sis in exchange for the blunt, we watched the stars and rolled another one, pouring out some formaldehyde as a sacrifice to the distant sea. Then we walked back toward the house and sat beside the flow of a raging fire until the trucks arrived, all the while closer to God than ever before. 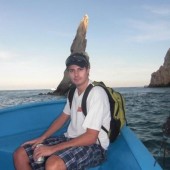 Matthew Dexter lives in Cabo San Lucas, Mexico. Like the nomadic Pericú natives before him, he survives on a hunter-gatherer subsistence diet of shrimp tacos, smoked marlin, cold beer, and warm sunshine.