Then Duncan decided it was time to steal Sara’s memories.

He had the skill, didn’t know how or when or why he acquired such a talent, but he could do it, at will, whenever he wanted—he simply wished it to happen and it happened.

At first he did it mostly to ex-girlfriends, former teachers, posers, people he generally despised. He stole their memories and they became his memories, he lived their past-tense lives and it was amazing and sad and fucked up. But more recently he’d been doing it to people he liked, even loved, who had bad memories and who wanted to be rid of the past whether they realized it or not. This, Duncan understood, was a huge responsibility. He was twenty-nine now, uncertain, and trying to do better.

“I just did something,” he told Sara.

They were in bed and she was still half asleep, warm and groggy and content. Her childhood, he knew, was full of neglect and abuse. It could all be erased. It could all be gone and part of him, not her.

“I stole your memories.”

“Try to remember something. Just try. Something from when you were a kid.”

He looked at her face and he knew it had worked, yet again, the crease on her forehead, the tilt of her mouth telling him that she was searching, searching, and coming up with nothing.

“You have pigtails,” he said. “You’re walking, at school, and some kid trips you from behind on purpose and you fall and everyone is laughing and this is something that’s stuck with you for years, it’s been significant and affected deeply how you view the world and people. Then, when you come home from school with skinned knees and a ruined dress, you get beat up. You try to run to your room and close the door to get away but you don’t make it. Your tears feel like fire on your cheeks.”

Sara sat up. She was fully awake, eyes suddenly bright as sparklers.

“I don’t remember that,” she said.

“It’s okay, it’s mine now,” he said, watching the light erupt from her eyes, watching her face as it continued to search, to look for what is now truly lost and can never be found again. 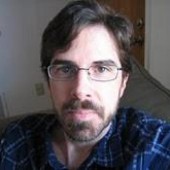 Andrew Roe lives in Oceanside, California. His fiction has appeared in Tin House, One Story, The Sun, Glimmer Train, The Cincinnati Review and other publications. He keeps a sporadic blog at andrewroe.blogspot.com.