The Moon Is Dead The day they pulled Paulie Sisto’s body out of the bayou, he came over to ask me for a slice of watermelon. Like he didn’t know how I wasn’t allowed knives.

My momma had carved the fruit into two massive halves, stashing one on the bottom shelf of our refrigerator. The other was mine to eviscerate. I’d spent the better part of the afternoon picking at the pulp, collecting the seeds in a soup can. They almost moved, shining like a hundred beetle shells.

“A handful, not a slice.” I offered up the rind.

“You drive a hard bargain, Carolee.” Laughing, he sat down beside me on the stoop. The heat of him was strange, wavery. “By yourself today?”

“What about Lila?” he asked, spitting a few seeds. In the grass, they looked even more insect. Our dog would’ve eaten them all, seed or bug the same. I’d picked my can by the size of her snout so she couldn’t get at them. But she’d gone missing days before. My momma insisted Lila’d turn up smelling of standing water, hungry as a hippo.

“Gator got ‘er.” Paulie stopped chewing. Something in his jaw shifted, like his bones had been re-tuned. Wind combed the grass around the trailer into a bouffant sweep, moved on to tease the lone towel flung over the clothesline Gran’d rigged up with a length of rubberized wire and some dented tuna can pulleys.

“Is that so? You see it go down, Carolee?” I shook my head and spat a few seeds of my own. Mine fell into the can, clean. Paulie’s still had some pulp clinging to them in the dirt. Wasn’t long before ants swarmed over the bright pits and carried them off.

“Just know. She liked swimming something awful.” This time his laugh turned into a cough; I patted him on the back. He retched up a spray of seeds, wheezing. The wheezes gave way to a deep, wet groan like a dog makes without opening its mouth, then another cough and the sound of metal. I looked into the seed can and found a bullet casing atop the pits.

Paulie got quiet, licking juice from his fingers, sounds still rolling up from his throat. “You ever hear about the ghost who got his tail chewed up by a coupla hunting dogs?” He spat in the dirt in front of us, just phlegm this time. The ants swarmed the red gob; a few of them got stuck there.

“Yeah, but where’d the bullet come from?” I was afraid to touch it. Seemed to me it might still be hot. If not from the gun, then from his gut.

“The moon’s a ghost too, you know,” he said, pointing to a sliver of pale light just above the tree line. Even a sliver seemed too much moon. The wind pulled my hair down over my eyes, chased a close, dead smell up from somewhere.

“Is so. Got a face, just like you and me.” Paulie pushed his palms down the thighs of his jeans as if they were dirty.

“I’m no ghost.” The watermelon’s flesh was gone entirely, but I kept scratching at the bitter white pulp along the rind, wanting Paulie to get back to the bullet.

“How old are you now, Carolee?”

“Twelve, end of the month.”

“You wouldn’t hurt yourself, would ya?”

My momma wouldn’t even teach me the electric can opener. She said my daddy couldn’t stand looking down from high heaven, see me running with a blade like a wild man. I didn’t question it; just didn’t cut things. Not even with scissors.

“Can you do me a favor, honey child?” Paulie asked, running his finger along the seed can’s rim. It caught and he bled.

I nodded, staring at the red swell.

“Keep this safe, Carolee. Don’t tell nobody.” He folded something warm and smooth into my hand before I could get a good look.

“Hay’s for horses.” I watched him walk off, scratching the back of his head, then fished the casing out of the seed can.

I stole the seeds back from the ants, put them in a jelly jar with the ones from the can. Same with the casing, and the bone-handled knife I found when I opened my hand back up.

Lila’s collar turned up a week later behind the park, near the drainage ditch, with a gator tooth wedged near the buckle, just like I said. Open your mouth that way, it ends up a jinx. Spot was ugly, all that yellow tape strangling the trees, and tourists coming through to see some chalk outline. I wanted to bury my dog. Everybody kept saying Paulie Sisto was the one dead. They wouldn’t believe I could prove he spat out that bullet. 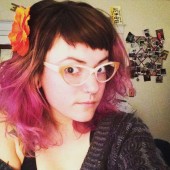 Emily O'Neill is a writer, artist, and proud Jersey girl. Her recent poems and stories can be found in Gigantic Sequins, Vector, and Wyvern Lit, among others. Her debut collection, Pelican, is the inaugural winner of Yes Yes Books' Pamet River Prize and forthcoming in 2014. You can pick her brain at http://emily-oneill.com.