She had lost the baby. Or misplaced the baby. In the dim early morning light, eyes wide staring at the ceiling, she is certain. But how? How could such a thing happen? She searches her memory. Anxiety makes it hard to focus. She fed the baby breakfast yesterday. She remembers that. They went shopping. The baby was in one of those enormous plastic shopping carts that’s supposed to be like a little automobile. Impossible to manage through the aisles of the store. But, no, the baby wasn’t in one of those. The baby is too small for those. The baby was in the baby seat of a regular cart. She remembers there were other babies in the store in carts. It made her think of rabbits making bunnies, humans making more and more babies until retail outlets are overrun, babies are declared pests, control measures must be implemented.

He does not seem concerned. He doesn’t ask. He sits with his newspaper, his coffee, his napkin under his chin, a corner of it tucked behind the knot of his tie. Sometimes coffee sneaks into his moustache and drips on his shirt, his white shirt. That happened once, and he had to change the shirt, and routine was upset, replaced by novelty and vocalizing and rage. She knows that routine is important in the morning. She must not upset routine.

She drifts around the edges of routine, experimenting with invisibility. It seems to be working. She continues to search her memory, going deeper. An image of the baby, a wrinkled sack of flesh fresh from her womb. What a joy! What a relief to be free of that horrible bump, like a giant tumor. Not a malignancy. What, then? A benignancy? Yes, that’s what. A benignancy. An indignant benignancy. A benignant indignity. The words tumble around in her brain like wrestling children.

But she must get back to looking for the baby, really looking. As soon as he leaves. It looks like he’s going already. He’s standing. He gives her a peck on the cheek. Not so invisible.

“Gone to look for the baby. Will call with news of progress.” Below that she puts two x’s and a small heart. “Pam,” she writes. 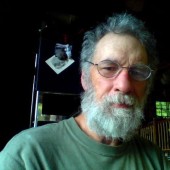 J. Lee Strickland is a freelance writer and poet. In addition to fiction, he has written extensively on the subjects of rural living, modern homesteading, and voluntary simplicity both for on-line and various print publications. He is a member of the Mohawk Valley Writers' Group and is currently at work on a novel, drawing upon his experiences as a youth in the anthracite coal strip-mining area of northeast Pennsylvania.