The Old Guys and the Young Guys For the past three years, I’ve played pickup basketball in a 45-year-old campus rec, an ugly brown building used by faculty, staff, grad students and the few undergrads who, for whatever reason, elect not to make the half-mile trek to the shiny new gym with the indoor rock wall and the outdoor pool. At the old rec—my rec—the courts are warped, scuffed and pocked with dead spots. The jumpers fall short, the passes wide. Our games are symphonies of frustrated grunts and wails, a collage of faces scrunched in anguish. We are players who, we swear, used to be able to make that play.

One afternoon in July, our rag-tag team of grad students runs fours with a group of middle-aged men in a near-empty gym. I’m stealing a few minutes of rest on the bench after our first game when one of the men makes small talk, the two of us stretching and sucking water while the rest of the group lingers around the free-throw line. I can tell right away he’s one of us. Probably a grad student, the type of guy who might make it a point to say that nowadays he really only does it for the exercise.

Eventually he asks my age. I see it coming, the slow realization that I can’t be as young as I look. When I tell him I’m twenty-five, he makes a familiar clucking sound with his tongue against his teeth. He shakes his head and smiles, a motion somehow both patronizing and nostalgic. “Man,” he says, then something about old guys and young guys, something about when he was my age. I don’t really listen—I’ve heard all that before. I know what it means: that because I’m young, I have no excuse to lose to him, no excuse to get outworked by a man nearly twice my age. And if I win, I have no right to gloat, for I am blessed with the strong, ignorant glow of youth, and victories like these are mine for the taking.

I don’t tell him my bones are older than his. It would sound too much like an excuse. Instead, I force my creaking body up from the bench, and we play another game. My team beats his, he gives the spiel I expected, and I’ll never know whose body suffered more after.

Except I do. It’s mine—of course it’s mine.

My long-distance running career ended at age nineteen, but it took three more years for me to really let go—to realize I had no choice, that it didn’t matter how tightly I clung to the ghost of the life I wanted but couldn’t have.

The reasons for my retirement were skeletal. The three stress fractures and torn meniscus I suffered the summer of 2009 seemed at first a freak accident—the frustrating but not tragic result of too many miles. But my knees cracked and popped and ached even months after they were supposed to have fixed themselves. I bounced from second opinion to third and fourth, endured electroshock therapy while my teammates hit the roads. One doctor suggested I take Advil. Another told me she thought I might not run again, though she couldn’t say why. The day I quit my college track team, the trainer who’d been working with me faithfully all year put his hand on my shoulder and nodded, grave but unsurprised, like he’d been waiting for me to admit what he already knew: it wasn’t working. It wasn’t going to work. Less than a year after I’d fought my way onto the team as a walk-on, I was dropped from the roster without a single race to my name.

That night, I came back to my dorm and took down the singlet I’d hung in my window for inspiration—clean and white with my school’s name embroidered in red across the chest. Today, that singlet is buried somewhere in the back of a closet in my parents’ home, and knowing I paid for it does nothing to make me feel like less of a thief.

It took three years for me to know, to really know, that I’d lost running forever. To know I was stuck with whatever it was I was becoming in the aftermath. That there was no chance my knees might heal on their own time, no chance I could save the thing I loved most.

In 2012, I went to see a chiropractor for a crick in my neck, and it was there I first learned of my scoliosis, of bowed legs that had left my knees without shock absorption for thousands of concrete-pounding miles. It was there I learned the failures of my design—the crick in my neck that was a turn in my spine that was a leg that hung too long. My body, it turns out, wasn’t made for running. Perhaps not for any sport at all.

From age nineteen to twenty-two, I desperately needed closure. I haunted myself. I lived in limbo, ghoulish and empty, an X-ray of a person. I swam and drank and bellowed. I emptied and refilled. Readjusted. Rebuilt. Left a little space open, always, for the switch that, when flipped, would erase everything I’d tried to make of myself since the injury. I lived knowing I would gladly self-destruct if it meant there was a chance I could run again, if it meant that one day I might wake and discover my freakish injuries had healed. For those three years, I lived like that in quiet. I was a danger to myself.

I should be happy I’ve found an answer: an end and new beginning in the cruel facts of muscle and bone.

But at nineteen, Frank Shorter was at Yale, jogging to relieve the stress of a challenging class load. By twenty-two, he was an NCAA champion in the six-mile run, only three years away from bursting onto the track in Munich for Olympic Gold.

At nineteen, a skinny kid named Steve Prefontaine was just joining up with Bill Bowerman, the not-yet-legendary Oregon coach and Nike co-founder. By twenty-two, Pre was an icon, putting the finishing touches on a college career in which he never lost.

I never had the talent of my heroes, but still, I had my hopes—PRs and league championships, a post-grad transition to road races, my marathon debut. Instead, I’m just another aging former athlete, one whose back in the day is sadly lacking substance. I’m too settled to be bitter, but the truth is, I still look back on those years and think I was robbed—if not of a running career, then at least of direction, of certainty. Of knowing what to make of a body that had failed me, one I was unkind to in return. Of knowing—finally knowing—I had to move on.

I love playing basketball. I love the beauty of its movements, the arcs and cuts and spins. Without running, I rely on the sport for exercise, for recreation, for release—not of aggression or anger, but the thrill of competition, the rush of adrenaline that once made me an addict. It isn’t a replacement for running, but it helps keep me alive.

I’ve never had a doctor advise me not to play, but I know my body well enough to know when I’m being destructive. I know it from the pain that climbs up my back to my neck and shoulders, the way my knees still snap in small, quiet ways. I’m good for a few games. I try to keep to my limits, but there’s still something in me that loves to push past the point of breaking. The men I play with every week don’t see me afterward, when I limp through my front door and head straight for the pain pills, crawling up the stairs to my office on all fours.

Twenty-five is young. Of course it is. But what can you tell me of those three years that felt like twelve? What of my knees and my back feeling three times my age? What of my chiropractor’s pity, every other patient in his waiting room on the other side of forty?

I’m as healed as I’ll be, but my body’s still breaking. I’m still aging, physically, at what feels like hyper speed. What, then, of the years to come? One of these days, much sooner than is fair, my body will crumple to the court in a way that will feel final. And I will not, even with my capacity for self-harm, be able to deny it. What of that moment, that pathetic moment, when I will finally know?

I haven’t seen that man who asked my age since that summer afternoon, but I think of him often. I think of his knees. He was a heavyset man, and that can’t help them. We are all, I know, harboring injuries in quiet, the cricks and strains that strip us of our talent.

I’m trying to think of a number, a pair of numbers, one for my knees and one for his. I’m still asking myself which of us really has it worse. And when we went head to head on that old court, stunted versions of the athletes we once had the potential to be, which of the two of us had the most excuses? Which of the two of us has been cheated most by time?

But here I am, still testing myself against other men, a habit I will one day have to break. 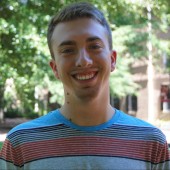 Justin Brouckaert's work has appeared or is forthcoming in Catapult, The Rumpus, Passages North, DIAGRAM, NANO Fiction and Smokelong Quarterly, among other publications. A former Division 2 walk-on, he is a James Dickey Fellow at the University of South Carolina, where he edits Yemassee and is working on a novel about runners.