The Only Car on the Highway Back to Tripoli My father drove north, Beirut blurring in the rearview mirror,
visa warm in his pocket, gilding him. No one else on
the highway, just him and four blank lanes and a margin of coast.

It’s too quiet. He’s missed something. His hands
shake when he combs the radio for signs of life. All dead air
then the fizz of a reporter, a jangle of qanun and habibi.

But the sky is already unzipping. The missile already
arching over the freeway. He could keep driving
but instead stalls in the middle of the lane

as the keys knell from the ignition,
as the incision curls overhead,
as the smoke takes his breath and writes his name. 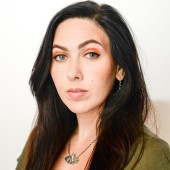 Ruth Awad has an MFA in poetry from Southern Illinois University Carbondale, and her work has appeared or is forthcoming in The New Republic, The Missouri Review Poem of the Week, Crab Orchard Review, CALYX, Diode, Southern Indiana Review, Rattle, The Adroit Journal, Vinyl Poetry, Epiphany, The Drunken Boat, and in the anthologies The Hundred Years' War: Modern War Poems (Bloodaxe Books, 2014), New Poetry from the Midwest 2014 (New American Press, 2015), and Poets on Growth (Math Paper Press, 2015). She won the 2013 and 2012 Dorothy Sargent Rosenberg Poetry Prize and the 2011 Copper Nickel Poetry Contest, and she was a finalist for the 2013 Ruth Lily Fellowship. She lives in Columbus, Ohio, with her husband and two Pomeranians.