The Patron Saint of Cloven Meat And what of faith in the town where hot nonsense weeps, where Winter comes to close all in its unforgiving grip?

All right and wrong are melting into dogma muck, strange blasphemies stride as certainties and what was once truth now sobs a rotten hollowness. And no one knows what to believe or think, least of all those who claim the right to revelation. Some break beneath this strangeness coming up from soil, coming down in rain, and so they fall to pieces, become no more.

Yet others embrace these melting days and find new meanings, new worth, in wrongness…

In a dream that seemed a squatting sourness upon his chest, it came.

In the manor alone, save for that madness that drove him, he wrote it down.

Neatly he wrote it, his revelation, for all to read.

For all to heed.

And then he took his own life.

Neatly, and with no great fuss.

His words were found…

Here is the church of Saint Barnabas and his Holy Mule, gutted by fires long forgotten, a torso soot-blackened and ash-stained, showing its bones to an uncaring sky. Not for an age has this crow-haunted place been a necessity for all, but a few still come, hoping to place strange new flesh around the bones of what they’ve always known.

The slanting pews are spotted with the old, brittle-limbed, curled in like kidneys against the cold, waiting to be safely, softly put away, waiting dumb for the priest to come from the darkness of the sacristy.

The crows are a scrabbling loudness in the cadaver of roof.

They took me from bed against the glow of dawn, bound me, blinded me, bundled me into some cold, hard place.

An engine growled; the noise and smell of it caught in my throat, and thrown to the floor I was taken away.

And the unknown thing in darkness with me fills every second with screams.

He comes; this latest in a long line of Father Keoghs; taller and younger than the last one, slimmer than the one before that, without the beard or stutter of the one that came before. There is a sour yellowness to his eyes, a marked concavity to his cheeks— long has this place broken those with faith, and it is working upon this most recent minister of God.

His pale hands clutch a pulpit soaked with dropping rain, stained with umber slashes of rot, bubbled with grey and orange mould; pages soak up the weep of the cloven roof, melting words and phrases into slurred unrecognisability. But it does not matter—Father Keogh knows all the passages by heart, as does his tiny congregation.

They made me drink, they made me bathe; held me down in freezing water.

And one of the men says “Sacrament tonight.”

And the thing in the next room screams as it is held under water too.

The voice of Father Keogh is a high and piercing whine, soughing between soot-blackened beams that shrug together in a parody of roof.

“And there at the foot of the gorge, the knight of the Lord named Barnabas lay, taken asunder by the sharpness of rocks, split open across the riverbed. And there, in the closing dark of this world half-made, Barnabas would be made anew.

“Still Barnabas lay; a flower of flesh unfurled in rain, yet in the weighing of these things the Lord could not decide; for Barnabas was found not damned enough to condemn, nor was he deemed pure enough to save. Long the Lord left him to lie there, in torment, suspended between death and forgiveness by the cold uncertainty of the strange creator of all things. But finally, breaking through those futile calculations, through that slow inhuman judgment, coming like a silver thread, like a flash of gold, sounded the penitence of the mule, the beast who’d fallen when the road gave way; the beast who by her master lay, their suffering pieces spread to mingle along the rain-washed river clay.

“And it was the earnest shame of the cloven beast that made the difference, that tipped the balance; that broke the deadlock of the Lord— the penitence of the mule saved the broken man named Barnabas. And the Lord did weep in his cloak of skin, for the judgment had been taken from out his powerless hands, the decision made for him; so it was seen as right and just and good in his swollen strange-loved eyes that the two halves be made whole, that Barnabas and his mule be joined together in the leaking of the love of the Lord, man and animal joined together in the melting of flesh.

“Through the grey of weeping clouds an angel of the Lord came down and sat upon the rain-washed ruin of Barnabas and his holy mule and an egg of change was softly laid upon them. And in the hatching of that thing it was shown that the love of the Lord is a melting thing—a slowly creeping intimacy; the loosening and the cleaving and the joining that are the horror penalties and ubiquities of flesh.

“Changed Barnabas was by that holy hemorrhage, by that blessed breaking of blooded bone, changed utterly and for all time. Great hooves the melting gave him; and mounds of muscles grey and oiled, and strange blunt organs man should never know. And his movements were no longer his own, his strange new body wrongness never his to control.

But in the passing of days the Lord let Saint Barnabas slip from his mind, and left him wrongly loved to walk the earth, a screaming thing in rain, until his sorrow endness came, alone and feared by all; the patron saint of cloven meat.”

Hands are working me.

Thumbs and fingers are pulling flesh, twisting it suddenly soft and painless.

They’ve taken my feet and legs away— I look down— there is nothing there.

“What shape are you giving me?”

And then they take my mouth away so I may not scream when they bring the struggling pieces of the other creature in.

The last tremoring sentence of the Revelation fades, and Father Keogh drags yellow eyes across the sour gauntness of his congregation. A crow lost in the rafters breaks the breathing silence, and the hand of the priest presses into forehead flesh, leaves behind a slap-mark white. When next he speaks his voice is soft; those who wish to hear must stoop forth.

“So was shaped Saint Barnabas, as we will all be shaped in turn, shaped into more terrible and more horrifying forms, our bodies and minds steadily taken from us as we are kneaded beneath the love of the Lord, until all form and purpose is finally lost to us, and at last we become one with the flowing water, with the melting, softening rain.

“But we must never forget that still there is love in that melting, the terrible and unknowable love of the Lord, love that comes with its awful cost. But what right have we to judge what love be given us? We are the wrong made. And further wrong we must be made. Who are we to decide what changes may be enacted upon us by the Lord?

“What duty have we but to return the love that is given us?

And Father Keogh stands in front of the broken altar, holding open hands in supplication, leading his congregation in final prayer.

“Dearly beloved,” he says, “we look upon the bodies the Lord has given us, we look with shame, disgust and love, and so we say; we are the soulless meat.”

“We are the soulless meat,” the response comes, diction softened by duty unthought.

“We are the meat!” screams Father Keogh, the corners of his mouth a pale spawn.

The blackened spars throb soft with that dull assertion.

They leave me in darkness for an age.

I move against the walls, against the door, maddened by the mingling of meat. They’ve given me too many legs— given me ones that aren’t my own, that choose to move and kick themselve

Oh Lord, I can’t stand the stench of myself.

They’ve draped me in soft fabric, wrapped it round my chest and neck; cloth that smells of damp, of cupboards in forgotten rooms—so soft it’s like a whisper on my skin, so tight it takes all freedom from me.

Binds the stumps where my arms should be.

The chanting dies in dribs and drabs, and on a sleeve Father Keogh dries a mouth now flecked in white.

“And so,” he says, “we are gathered today, here at winter’s edge, to partake of the holiest sacrament known to us, gathered here to whisper the shames, to beg the strange love of our Lord.”

The congregation is a mass of bright-eyed faces; cold air sucked into lungs with hungry expectation.

And Father Keogh reaches out a hand and screams “Kiss the love of the Lord incarnate!”

And it is led out.

Lights after the darkness, and all those faces watching me, held in purple bands, stumbling across the dirty floor.

I am a mass of fetid muscle, swathes of me sorrel haired and I have hooves—I have hooves—instead of toes these dead and heavy plates weigh every step I take— they’ve given me a tail—they’ve made me a monstrosity.

But all eyes are on me.

At the beckoning of the priest the congregation rises and leaves the pews, stepping mutely into line, approaching the snorting, stamping thing held in bright purple bands. And one by one the parishioners place a hand upon the creature’s meaty neck, dragging themselves up to the ear of the thing to whisper urgently their petty confessions—

“I wanted something I didn’t deserve. I hurt so many to have it. I hurt my Mammy.”

And all the parishioners tilt faces until, closed-eyed, they meet the mouth of the struggling melted creature, plunging with the warmth and wetness of tongues, filling that moaning, soft-resisting space with a smack, knotting with the hostile slip of meat inside, tangling wet until they broke away raw-lipped and heaving, tasting the terrible sacrament yet feeling no release, no release or relief at all.

Oh Mother of God help me, they fill my mouth again and again—I feel their hot tongues flapping in me— Men and women, young and old, all of them lining up, open-mouthed or licking lips, reciting their shames for confession.

But they ignore me; glassy-eyed they drift forward, place cold hands upon my alien flesh.

And perched upon the pulpit I hear Father Keogh cry “Listen to the misery of meat! Listen to the words spawned by the love of the Lord.”

“Oh help me,” I moan through the muzzle they’ve made from me, “Oh help me, please. Stop. I don’t want this.”

Impotently, I snap my mule-teeth thinking; please don’t let this be the only love I’ll ever know.

Face after face leans in to meet mine. 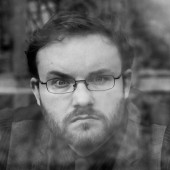