The Poem is Always in Your Hometown In The Triggering Town, Richard Hugo wrote, “The poem is always in your hometown, but you have a better chance of finding it in another. The reason for that, I believe, is that the stable set of knowns that the poem needs to anchor on is less stable at home than in the town you’ve just seen for the first time.”

The hometown my poems are always in is located in the Antelope Valley, about eighty miles northeast of Los Angeles in the Mojave Desert—the high desert. Judy Garland lived there in her teens, as did the Mandrell sisters and John Wayne. Frank Zappa attended the local high school where he met Don Vliet, AKA Captain Beefheart. Manson’s right hand man, Tex Watson, had a dilapidated spread way out of town. Jack Palance’s was swankier. Every year, Robert Mitchum judged the chili cook-off out at the Tropico Gold Mine. A ton of stuff is filmed out there—when you need that middle of nowhere look—or another planet. Captain Kirk fought the Gorn at nearby Vasquez Rocks.

It was a small town chained to the floor of a bowl shaped by mountains on three sides of it. Four sides, actually, but the fourth mountain range was too far away to see, like the other side of a great lake. In winter, we could see snow on the far Tehachapis and a bright green blanket along the San Gabriels because the high desert gets green in winter. In spring, poppies and pollen from the nut and stone fruit trees that made my father miserable. Fall was grasshoppers, flying ants, and wind so fierce it blew cars off the road. In summer, a sea of beige, heat waves rising from the roads and rattlesnakes.

Now it’s not so tiny. The population shot up right after I graduated from high school, mostly with upwardly mobile Latinos and African American families looking to get out of L.A. proper—parents willing to face an hour-long commute for the sake of their kids. It was dubbed a boom town. Within a few years, The New Yorker ran a story called, “The Most Racist Town in America.” By 2010, the U.S. Justice Department found that we had the highest rate of hate crimes of any region in Los Angeles County. The population fell, leaving many of the new tacky strip malls and stucco track homes empty and abandoned—and they still are today. It would be a paradise for squatters, if the weather were better.

I have a photograph of our house with its face covered in tumbleweeds all the way up to the roof. They blew in one November night. We had to leave through the back door to come around and take a look at it. My father and I put on work gloves—my hands swam in them. He untangled the thorny balls, and I carried them over to the open plain across the street where our neighbors were dumping them, too. We hoped the wind would carry them away and it did.

When a car broke down and was left on the side of the road, within a few hours there would be one bullet hole in it. An hour after that, three or four. The next morning, it’d be blown to shit by a homemade bomb made of duct-taped M80s soaked in gasoline.

And the drugs. The Antelope Valley was often referred to as The Ampalot Valley because it was biggest producer of meth in the country. But it wasn’t just meth. My old friends from home and I share a moment of discovery as adults that not everyone huffed Kiwi shoe polish.

Like the town where I grew up, the towns where my poems anchor defy logic. They are the opposite of, let’s say, Amherst. They are populated by people navigating the world via compulsion’s autopilot, crazed by the potential of the American west. 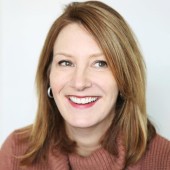 Jennifer L. Knox is the author of three books of poems, The Mystery of the Hidden Driveway, Drunk by Noon, and A Gringo Like Me, all available from Bloof Books. Her poems have appeared in The New Yorker, American Poetry Review and four times in the Best American Poetry series. She is at work on her first novel. http://www.jenniferlknox.com/