The Possibility of Ghosts We’d heard what happened in the old place. How it once belonged to a young couple, a man and a woman who were roommates and friends but nothing more, no romantic entanglement to speak of. It was believed the man went crazy, perhaps from unfulfilled desire for the woman, unrequited lust. He began complaining that she’d become friendly with a ghost who dwelt in the house and with whom she was plotting to kill him. Their relationship suffered no small strain from his accusation. In the end, though, the man died, killed by a ghost and its still-living woman lover, so the evidence had pointed.

We were told stories of ghost raccoons possessing the basement where a mad taxidermist had experimented on live raccoons, until they were no longer alive but deceased and very animatedly preserved. We found his various tools in his creepy old taxidermy room, partitioned in the basement behind doors that had the carcases of preserved raccoons glued to them. You didn’t have to listen too closely in the nighttime to hear the specters of raccoons skittering around down there, knocking over ethereal garbage cans and eating the ethereal garbage inside.

Our realtor warned us before we purchased the house, “There’s a possibility of ghosts, Mr. and Mrs. Hollingdale.” But at hearing the realtor’s warning, one we deemed ludicrous then, I pursed my lips, pffft’d and proceeded to mock her, saying, “There’s a possibility of your being a stupid bitch.” I turned my head to the sky and laughed. It all seemed so funny in those days, everything. So funny.

My sons spat in our realtor’s face and my husband purposely rear-ended her VW Rabbit with our CR-V — all a bit extreme in retrospect. She sobbed that she was going to involve the police, but the backend axel of her VW was damaged to such an extent that when she burst away, accelerating to match her pique, it snapped and sent her car spinning off the road into the single well-aged oak tree (tree of any kind) on the property. This killed her pretty instantaneously, after a brief upsurge of gurgled moaning and a couple jerks of the death rattle.

Family-wise, we were a horrible group of people back then.

The first night in our new home, we sat amongst the scanty threadbare furnishings, eating Chinese food and contemplating future décor. “The raccoon room will be my gun cave,” my husband Tom remarked. I said, “Water chestnuts are probably the most quintessentially Chinesey food in the world, and I hate them.” “Well I love you—“ Tom said, just as a carton of egg fooyung levitated off the floor and hurled itself without visible cause into his face. We all had a good laugh, except Tom. Tom, softly weeping and wiping away the residual gravy, stood and loaded one of his shotguns.

Then some days later I found my oldest son Sebastian in the kitchen mopping the floor with blood, getting the floor all clotted and rusty red. I said to him, “Stop that.” He said he was bored, and besides the TV was doing its “Poltergeist thing” again. Tom and I had called the cable company, telling them of our trouble. They sent a man over. He shouted at the TV, telling the poltergeist, “Hey, get out of there,” over and over again. He rapped a bundle of cable wires against the television screen somewhat too gently (in a way I found disconcerting). But then a giant spectral hand emerged from the screen and pulled him into what we assumed was some kind of horrifying cross-dimensional netherworld. The TV hasn’t stopped screaming since, at least when it’s tuned to the wrong channel, “The Cable Guy” channel, as we’ve come to call it. It’s much less intentionally funny than the Jim Carrey comedy of the same name.

We were worried. Fact was, Sebastian started doing very poorly – “diseased,” the doctors had said. The doctors said he had something called meta-rabies, which I know sounds like a fake disease but the doctor-in-chief was a lot like House on House M.D., except meaner and stupid. So we believed his diagnosis a little more readily than our sense of rationality should have allowed. Later, we found Sebastian a less philosophical and completely accredited doctor who prescribed bed rest.

Still, something was persistently wrong with Sebastian. He kept vomiting out of nowhere, caused by nothing – or, as he claimed, because of the smell of the Brussels sprouts I kept at a boil on the stove because they masked the scent of stale industrial-strength raccoon preservatives still emanating from Tom’s gun cave. Also, I happen to enjoy the smell of cooking Brussels sprouts, consequences be damned. (My family dislikes it when I announce “they’re the official sprout of Brussels!” I do this often.)

“I think we should move,” Tom said to me, at last. “Gun cave or no gun cave, I think this place is causing us real harm.” He went on to explain that he was really susceptible to the bad energy, and he could tell that Sebastian was even more susceptible than he was. Possibly worst of all, we hadn’t seen much of our youngest son, Evan. Evan had taken to hiding in really bad places like old musty luggage trunks stacked in the attic. He’d also taken to riding the faulty old dumbwaiter whose shaft was chock full of irretrievable skeletal remains, because all sorts of people had died riding in it. Kids mostly, kids who’d thought the dumbwaiter looked like fun but discovered their bodies weighed just enough to snap the old cords or disassemble the pulley apparatus and send them plummeting to the basement. It had happened, we were told, six or seven times before. At least.

But I had a secret: I wouldn’t let us move. Maybe I couldn’t, but I certainly wouldn’t let us move. I loved our house. Everything about it. The foul odor I’d helped cultivate, the violent images it proffered without warning, the gun cave. And it loved me back. I had what might have been a dream or hallucination in which a rocking chair that I’d sometimes sit in after my twice nightly Ambien seemed to spring arms and hugged me — so tightly, in fact, that I felt myself swimming in a literal pool, renewing all lost passion and verve. My slow dissolution by an entropic and unsatisfying familial life was wiped immediately from slate. I’d never felt such love before. And healthy or not to believe it, the house provided me with something my family couldn’t: a home. They say people make a house a home, but I say no. A house makes a home. It has walls and a roof. That’s a home! Feel its literal, homey embrace while you’re mildly intoxicated. Go ahead and fill it with whatever you want, whatever you think can make you happy, people or possessions.

I began my plan to stay put by manipulating Tom and Sebastian’s emotions (Evan still had not turned up). I insisted Sebastian undergo various so-called treatments that I knew would keep him anemic and bedridden, like regular meals of tainted skim milk. Insidious? Maybe, but I didn’t want him to die, just remain sickly enough that he’d need be wheeled around as an invalid forever. Sebastian complained, yes, but not of his illness. He complained about the cable guy trapped in our television set.

But then — of course — things went terribly wrong. My plan was quickly undone, undone by Evan, of all people.

Evan returned with some supra-natural awareness of my plot against our family. He said the realtor woman who first warned us of ghosts and whose death we were arguably responsible for had become a ghost herself. Evan sauntered home unexpectedly one evening, almost as an apparition himself, calling forth to reveal Sally Field. That was the name of the dead realtor, not the actor. Ms. Field was, even in death, profoundly unpleasant. She informed us that, “Becoming a ghost is a choice. It’s a choice you make when you die, or sometimes beforehand, and you do it for any number of reasons but mostly your reasons have to do with a powerful emotion, for example a desire for revenge.” She added, “If I sound pissed it’s because I am.”

Evan said, “Sally was going to crush my head with a brick. But I saw her before she could do it. I said I’d lead her to all of you, to you especially, Mom. Because, really, all of you are who she really wants dead — Mom, you especially.” He then tucked himself into the space between the corner walls farthest from us.

Sally continued, “Yes, but the problem is you’re protected by this house, and namely by the triumvirate of two human spirits, the ghost who originally haunted this place. They’re really here and breathing some sort of plasmic life into the place. They prick me with static electricity, which is bothersome and, after a while, starts to hurt. That’s whenever I try to kill you, in particular, Mrs. Hollingdale. The ghosts are indifferent to Sebastian, who’s in such a sad and sickly condition, and they couldn’t care less about Tom, because Tom is already dead inside.”

“I wouldn’t say I am,” Tom started to say, but I quickly interrupted.

“A triumvirate means there’s got to be three, just so you know. And I’m pretty sure the term comes from Ancient Rome, in some way,” I said, proud of this vague factual knowledge I’d apparently retained.

“Yes, the third of the triumvirate I was getting to, it’s the amorphous singular entity of the multiple massacred raccoons.”

“The reason for that is I keep this house smelling like garbage.” I said, feeling somehow smug and empowered by my newly discovered protectors.

“The point is, I’ve come for revenge. I’ve come to kill you, at last, Mrs. Hollingdale.” Sally sent a brick levitating somewhere above my head.

“But where are my protectors? You said I have a triumvirate of protectors. Didn’t she, Tom?” Tom said nothing, inching closer and closer to the direction of the basement and the gun cave.

“I was finally able to convince them that, if you were dead, you’d be here forever. They know all about your plotting and planning. I revealed it to them. They know there’s no need to keep you alive if there’s no danger of your ever leaving.”

The last living memory I have is the instantaneously sensuous pain of masonry propelled heavily against my skull.

I felt dozens and dozens of hands gripping me tightly, many more hands than had gripped me in my rocking chair. The hands held me fastened to the spot I’d been killed. My spilt blood spreading across the hardwood.

The aftermath was a stain from all the blood, a stain I won’t let them undo. That’s my stain. Remove the boards, if you like. Try carpeting and discover I will always seep through. It doesn’t matter to me. I cannot be exorcised.

Sally Field gave me the greatest gift she might ever have given anyone, and she looked so miserable when she finally realized this. She hovers over me almost daily, asking if I’ve had enough while reminding me I can never leave.

I reply to her, always — laughing, laughing a laugh just barely perceptible to the living, only enough to make peach fuzz tingle. 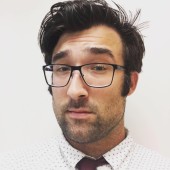 Matt Rowan lives in Chicago, IL. He co-edits Untoward Magazine and is the author of the story collection Why God Why (Love Symbol Press, 2013). His work has appeared, or soon will, in NOÖ Journal, Gigantic, Booth Journal, Necessary Fiction and Pear Noir!, among others. More at literaryequations.blogspot.com.