The Posture of a Gentleman She hates it. Her stuffed animal is aging. The day she and her husband bought him near Trevi Fountain in Rome, the monkey’s russet fabric was taut. Its alert features exemplified the mark of craftsmanship. It never crossed her mind that the monkey would age and wrinkle, or that the cotton stuffing would shift and disintegrate.

When she leaves her condominium, she props him up with pillows and crosses his legs, mimicking the posture of a gentleman. She’s painstaking about keeping him out of the sun, away from cigarette smoke, off the floor, and free of lint.

As a child she regularly visited flea markets and garage sales with her grandparents. On strangers’ lawns, she would gaze upon mountains of spoiled and forsaken stuffed animals. Each matted with toddler drool or disfigured by partially melted Jolly Ranchers. The mounds of toys reeked of fevers, sad houses, and junk food. By age six she had trained herself to avert her eyes from the piles, praying she wouldn’t gag in public.

Her husband teases her now, says she’ll have a nervous breakdown if anything were to happen to the monkey. Something is happening to the monkey, imperceptibly, day by day. His football-shaped head has begun to tilt southward; his parallel legs are hollowing out. Her devotion is consuming him, one thread at a time. 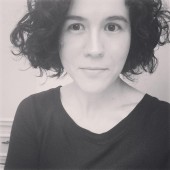 Ursula Villarreal-Moura is a writer and book reviewer. She was the winner of the 2012 CutBank Big Fish Flash Fiction Prose Poetry Contest, and her fiction has appeared in CutBank, The Emerson Review, Vol. 1 Brooklyn, DOGZPLOT, Lunch Ticket, NAP, and elsewhere. She tweets at @Ursulaofthebook.