I walked into his office and closed the door. There were piles of papers everywhere and a deer head hanging on the wall.

What can I do for you? he asked.

Well, I just don’t know what I’m doing half the time anymore, I said. I think it would be great if you could keep an eye on me.

Sure, he said. Is someone threatening you?

No, nothing like that. It’s just me. I can’t trust myself.

Any clues or suspicions?

No … but the whole thing is pretty suspicious.

He pats my hand. You’ve done the right thing, he says. Usually if you suspect something to be true, it is.

I left his office feeling much better. Almost immediately the eyes were upon me—cars that followed a bit too close and too long, people watching me from across the street. At home a red light blinked between the books on my bookshelf.

A week later I returned to his office. Well, we have news to report, he says. Are you ready?

Yes, I nodded, sitting down.

The first picture was my car parked in front of the post office. If you’ll notice, he says, circling areas of the photo, this is a no parking zone and the sign is clearly displayed. The subject arrived at 3:14 and parked for 23 minutes, in blatant violation.

I nodded, didn’t say anything as he handed me the photo.

Subject, after watching said video, stared at the computer for one hour and forty-six minutes without pants on. The phone rang on three different occasions and the subject ignored the calls without even checking the caller ID.

Subject smoked marijuana at 9:16 and then took a bath while drinking an airplane-sized bottle of cinnamon flavored whiskey. During the bath, subject appeared to have a conversation with no one that lasted for 11 minutes.

At 11:34, subject got into bed and read a book until 12:13, when she turned off the lamp to presumably sleep. Then the most curious of all: at 12:21, just 8 minutes later, the subject got out of bed and laid directly in the middle of a moonbeam shining through the skylight. Subject cried until 12:31.

After that, our man couldn’t see anything else. He handed the stack of pictures to me.

I sighed. I’m not completely surprised.

If it makes you feel any better, I see this kind of thing all the time.

I guess it’s just better to know for sure.

I’m sorry to be the one to have to tell you, he added, handing me a tissue. 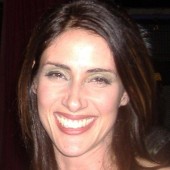 Nancy Stohlman is a founding editor of Fast Forward Press, and her books include Searching for Suzi: a flash novel, Live From Palestine, and Fast Forward: The Mix Tape, an anthology of flash fiction that was a finalist for a 2011 Colorado Book Award. Her work has been published in over 30 journals, anthologies and magazines. She’s currently a writing professor in Denver and the lead singer for the lounge metal group Kinky Mink.