Mid-lunch on The Fig Leaf’s patio, a week before a real live prince will wed the ordinary daughter of two former flight attendants, of all things, each of us are two G&Ts in, except Martha who went with daiquiris and smiles blearily with strawberry breath, too buzzed to kick Joanie under the table at her crack about calories, and how it’s a good thing it won’t be Martha on the arm of a prince any time soon. Instead of slugging her with a meaty fist, Martha’s eyes go glassy and wet, and Allison snaps her fingers at the waiter until he brings another round, our knight in shining pompadour.

“I was a princess every Halloween,” Martha says, stirring whipped cream into her booze smoothie while we remember our own Halloweens of plastic tiaras and jelly sandals for glass slippers, crying over road-dirtied pink taffeta hems at the end of our neighborhood parades.

Sarah asks the heartthrob waiter for six toothpicks and he brings them with a grin so saucy we almost forget to groan when Tara gets the short one. She takes it gracefully, promising to shampoo her rugs before the royal wedding and to make sure Stan’s out of the house. Then Joanie says she’ll bring some flax-and-prune muesli, and Martha goes the other way with Starbursts just to piss her off. No one balks at driving way the hell over to Middleboro, or having to sit on Tara’s doghair-crusted sofa because we all want to see it, the pomp, the circumstance, the dress, and the rest of us, all single girls into our thirties, are unable to live with the consequences of each watching singly, honking into store-brand Kleenex in the pre-dawn Friday light.

Tara’s place is tiny, and though she’s the only one with a husband, we’re not jealous because he’s not much of a catch. Every day he’s out of the house by six a.m., she promises with her mouth milky and full from a crab-stuffed ripe tomato. Even when he’s home, he stays out of sight when we go over for bridge, drinking beers in the basement, playing Halo loud enough for us to hear the crossfire, fingernails still rimed with half-moons of grime from the rare moments when he’s hard at work at the Quick Lube.

Unlike the rest of us, he has not put in for a personal day, and after work he’s got the billiards club, all those bald-headed former frat boys caressing their custom sticks and looking down the barmaid’s shirt in the mirror—which, for tips, she lets them do without flinching.

“You girls are so lucky to be single,” Tara says, shifting side-saddle on her chair and crossing her legs carefully to the side. Four years ago, we were Tara’s bridesmaids. The photographer forgot to use his flash so we all came out sepia-toned—old and frozen-looking as our undistinguished ancestors.

“I almost studied abroad in Scotland,” Allison says, sallow-skinned behind the hand she uses to bring a Virginia Slim to her lips. She flicks a smile across the table. “I got Mono instead. If only I hadn’t made out with Danny Little….” She shrugs as if to say who knows.

We sip our drinks through coffee stirrers and swallow hard against the liquor sting, but when the handsome waiter sets the check in the center of the table, bowing low and winking and drawing out his deferential, “Ladies,” there’s a half-second no one expects when we rise above our sensible shoes and crow’s feet, support hose and fat orange tabbies, beery blind dates and functionary jobs, and smile with lips pursed, barely deigning to acknowledge him, each as rigid and cold as the queens of distant countries; at least until we confer the tip, we are ordinary no more. 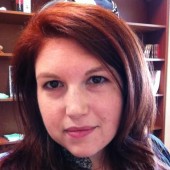 Katie Cortese is the the author of the forthcoming Girl Power and Other Short-Short Stories (ELJ Publications, 2015), and hold an MFA from Arizona State University and a PhD from Florida State. Her work has recently appeared in Gulf Coast, Blackbird, The Baltimore Review, and elsewhere. I teach in the creative writing program at Texas Tech University where I also serve as the fiction editor for Iron Horse Literary Review.