The Secret Thoughts of Thomas, the Clerk in Men's Wear Thomas had spent the afternoon folding shirts in the men’s department. Christmas would be upon them soon, and the store was always busy. Sometimes, he would just finish folding a sweater when a woman grabbed it and shook it out, holding it up to the air as if it were her husband. Then she’d frown and drop it back to the table in a heap. At such times, Thomas remembered the stories of planes breaking apart high above the earth, how the rushing air would peel the clothing from the passengers, how they would end up naked and dead on the forest floor, how their clothes would hang in the branches for miles–like Christmas ornaments put up by a drunk. He imagined the clothes in the highest branches were simply left in place. Someone could die just trying to retrieve them, he reasoned. Years later, though, when the crash was forgotten and the loggers inevitably arrived, somebody’s auburn pencil skirt would tell them what happened here, if only they could listen. The faded blazers and underwear would suddenly be back on solid ground–the accident over at last. 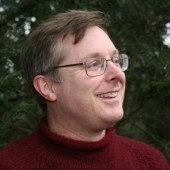 Charles Rafferty's poems have appeared in The New Yorker and The Southern Review. Recent stories appear in Sonora Review and Staccato. Currently, he directs the MFA program at Albertus Magnus College.