The Sinner and the Saint I first felt him slipping away when I awoke from a delicious post-coital nap in a roadside motel room where we’d stopped on an anniversary trip. He was reading the Bible from the drawer, page after page, like a chunky beach novel. I figured he was bored, so I slid under the covers to position my head at his crotch. He pulled off the blanket and said, “That’s okay.”

I sat up. He kept reading.

Then it was his bowed head and silent, moving lips just before dinner at Charlie’s. I pretended not to notice, sipping my water and crunching the ice chips. I felt like I was in heat. I slipped my foot from its shoe and rubbed my toe up and down his calf under the table. He looked at me. Grinned. Looked back at the dessert menu. Normally, he might have said something like, “You could be my dessert,” eyeing me lasciviously, but that night he said, “I feel like pie. Want to share a slice?”

He was cheating on me with God.

How could I win? I only have my humanness, my body. I can’t perform miracles. I am no savior. And I didn’t have newness on my side after ten years together. We’d managed, somehow, to keep the flame going that had burned out with so many other long-term loves. I’m not even sure how. It was like magic, maybe. But even that’s not as powerful as prayer for those who believe.

I knew him before he was a Saint. He belonged to me before he belonged to God. He’d drink all the wine and make everyone laugh with his dance moves, gyrating his hips in rhythm. The kind of dancer you just knew would be good in bed. And oh, he was. All the women wanted him, but he only wanted me. He played bass in a band, and he liked to host jams, drink beer, and smoke up. We were rarely in bed before sunrise—his favorite time of day. He’d drag me up to the roof, and push a donut and cup of coffee at me. Once the sun made its appearance, he’d always sigh like it was a relief. Then he’d lick the powdered sugar from my lips, and we’d make love on the bare concrete, our coffee growing stagnant in its styrofoam.

Our Sunday mornings were the lazy kind: coffee, skin, crossword, more coffee, more skin. I would sleep late—he’d get his sunrise fix and sometimes make breakfast. But one day he came in with a tie on and told me he was going to check out a church. At nine in the morning. I pouted, ever the selfish only child who never learned to share. And Sunday mornings had been sacred for us (in a manner of speaking).

He was evolving—slow, small changes. His spiritual dabbling had become full-on exploration. He trimmed his beard down to a goatee one week; shaved it into a soul patch the next. His all-black uniform went to white tee and black jeans to white tunic and linen pants, prayer beads around his neck and sandals even in snow (though sometimes, to my horror, with socks). His exploration was bordering on devotion.

We’d stopped having sex as frequently, and I became the regular initiator. I’d started investing my hard-earned waitressing money on lingerie. I wanted to believe my body could re-convert him. Sex was the only weapon I had that God did not. But flesh is mortal and like anything else earthly, it gets boring after a while.

By the time the pregnancy symptoms became too numerous to ignore, he was living with his mother, who’d broken her hip and who’d hated me from the beginning. She encouraged his pursuit of faith, especially if it meant distancing himself from me. She sent him home with study books and candles shaped like clasped hands and an old rosary that had belonged to his great-grandmother.

When he told her the news, she encouraged him to get a paternity test. She’d been watching a lot of Maury Povich while she recuperated. She also thought I was a slut. She cared less that she might be having a grandchild and more about being right. Also, I guessed, about potentially becoming a guest on Maury. Like everyone else, she wanted her fifteen minutes of fame, the camera and lights. Even if she was in a wheelchair with uncombed hair and a bad case of rosacea.

Not that I hadn’t been tempted by offers, even in the short span that he’d been gone. Men with ridged abdominal muscles and five o’clock shadows. Men with bone-white smiles and moist lips. Men with hands like homes. But only temporary ones. He’d been the most permanent thing in my life. The thing I never got sick of. Touch that still thrilled me after years and years of touching.

He’d always wanted to be a dad. He was a combination of virile and gentle. Proud. Good. He’d always been so good. It had kept us together really. Because I was not good. I was difficult. I broke commandments left and right, several more than once. Coveting neighbor’s wife (well, neighbor’s husband)? Check. Taking the Lord’s name in vain? Big fat check. Lying? Too many times to count. But that was before I met Augustine. He’d made me better. Almost good (I still had a filthy mouth). That’s how I defined Love now. How could I ever see it another way? How could I ever see it with anyone else?

He moved back in. He brought me heating pads and gave me foot rubs. He slept beside me with his hand cupping my growing tummy bulge. Now I understood those women that tried to “trap” men with babies: it was a powerful thing, a new life containing a part of yourself. What saint could avoid watching a miracle unfold?

I figured I had six more months to get him to stay. Even though I knew it was more possible that some infinite, all-knowing being existed and was orchestrating every move and stop between us.

He didn’t miss a doctor’s appointment, even if it meant missing a church meeting or Bible study (and often, out of spite, I’d schedule them for these times). He cried when he saw the ultrasound—sobbed, like he’d lost someone close to him. I wanted them to be joyful tears like mine, but I could hear the ache in the small animal sounds. I wanted to hold him when he should’ve been holding me. But he couldn’t even look at me. His eyes were closed. I knew he was praying. For mercy. For forgiveness. For a different miracle.

“It’s a boy,” the technician said, pointing at the tiny nub of a penis on the screen.

And Augie was sobbing again, and the technician said, “I’ll leave you two alone.”

This wasn’t how I pictured it, many years ago when we started talking about family and forever. I imagined his lips on my rounded belly. Their absence now broke my heart, a visceral pain that made me cry out and start sobbing myself.

Augie finally broke from his depressed reverie and came over to me.

“What is it? Are you all right? A contraction?”

I had to be in actual physical pain for him to take notice of me these days.

I shook my head. I could see the conflict bubbling inside him, like an angel and devil duking it out. He felt called to live a celibate life with the God he loved. But it was only right to be a father to the child he made, to stand by the woman he loved—or once-loved.
“I’m sorry.”

“Don’t be sorry. You didn’t make this baby alone. I’ll take care of you both.”

I was crying harder now, which would make the lie more believable. It was all too easy. I lifted my wet eyes to him.

“He’s not yours. I tried to pretend because I didn’t want to hurt you, but. Your mother was right about me. I got bored.”

There was a knock at the door before he had the chance to respond. The technician peeked his balding head inside.

“Everything looks good, so if you don’t have any more questions, you can go ahead and get dressed.”

As soon as the door closed, he said, “Whose?”

I wanted to hurt him so bad.

“None of your business,” I said a second later. “Why do you even care? You’re off the hook now. Go home to Mama. And Big Daddy up in the sky. I’ll take a cab home.”

I was a terrible liar. I got irrationally angry and pushy. He knew that. And he let me do it. Let me push him away. He wanted to believe what I said was the truth. All the fight and fire for me had gone out of him, replaced by a different fire, eternal and subdued.

He stood there, holding my purse. Like a God-damned saint, I thought, and then I almost laughed.

“Fine. Just so you can come in and get your stuff.”

He’d already begun living a simpler life, so there wasn’t much to pack: a toothbrush and toothpaste, deodorant, a comb, two books, a pen, a few white t-shirts, a pair of dirty socks. I sat on the sofa flipping channels. I couldn’t watch. I was afraid I’d be selfish and ask him to stay. Confess to my lie and catch him in his own. I just hoped—maybe even prayed to something—that he knew what my sacrifice meant. That this was Love. No—more than that. This was Passion. A sacrifice that led to suffering. One that you endured to save someone else. How could he see it in a story about some stranger hanging on a wooden cross, but not see it in me?

He lingered by the sofa. I could see him out of the corner of my eye.

“There’s nothing else to say, so let’s not try to play nice,” I said.

“There’s so much to say,” he said, waiting for an invitation to sit down, an invitation that would never come, no matter how hard he wished or begged or prayed for it. I would make sure of that.

He left a thick envelope on the table by the door when he left. I couldn’t open it for days. It taunted me as I came and went.

On the third day, I gave in to my curiosity. Inside, he’d left hundreds of dollars and a smaller, folded envelope on which he’d scrawled, For My Son. It took everything I had not to open the note or rip it to shreds, not to throw the cash out the window and cause a riot on the street below. It was only the first gentle pressure of the baby’s foot on my ribs that stopped me. I touched the spot where I’d felt the jab. He kicked back harder. I wrapped my arms around my stomach, and I cried and cried and cried and cried and fell asleep on the couch with the TV still on.

In the morning, bleary-eyed, I wrapped myself in a sweater and went up to the roof with my decaffeinated coffee. The sun rose in a fiery blaze. The beauty was almost unbearable. Almost otherworldly. I almost understood everything. I almost forgave him. 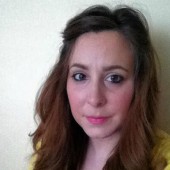