“The snow whale was longer and larger than the bowhead. His skin was as white as the ice, but there was also a grayish cast that made him look aged. Unlike the bowhead, he was covered with imperfections. There were barnacles on him, long scars, and swollen over harpoon blades. His head and body were a uniform and enormous, elongated box. He lifted half out of the water with little effort and his mouth opened wide.” 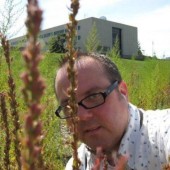