The Story of a Lost Cat, Sort Of Here’s a joke: How do you train a cat to get off the furniture? Buy a dog.

Here’s something true: It’s impossible to give away a cat.

A homeless cat might as well be a bucket of puke or glob liposuction discharge. “No, no,” people say, backing away from you, “We aren’t currently in the market for a cat.” Cats are radioactive, thistles in the domesticated animal community.

My wife and I learned this the same way everyone else learns it: we tried to give away our cat. (He had issues with the litter box, and we had issues with smelly carpet.) I’ll admit now that I loved the little craphead, though. We had an odd sort of connection. He’d traveled with me from Boston when I moved to northern Ohio, and I suppose I appreciated his willingness to relocate for me. Still, our relationship mostly consisted of him sitting on the recliner and me trying to sit on the recliner.

“I’ll never think of him again,” she said.

We tried giving him away. We put his mug shot up on craigslist and Facebook. We tried students and friends. We offered to wash cars and hang drywall and patch asphalt. We tried getting people drunk first. Consensus: cats suck.

Then something odd happened. He ran away. Just disappeared one Saturday that summer, as if he’d heard us scheming about his deportation and decided to make a break for it. I was secretly sad; my wife was not. She never said it, but I could tell what she was thinking: I hope he dies and it hurts. You don’t get to pee on my wife’s carpet.

I gave him a couple days and then called some local animal shelters.

“Haven’t seen it,” one woman said while rustling papers on the other end. I gave her his generic description again (orange, stripes, mutt), and she told me there was a month-long waiting list anyway.

“Him,” I said. “His name is Chekhov.” Then I spelled Chekhov.

She told me she liked Star Trek, too, which confused me. (Apparently Chekhov was also some sort of galactic engineer on Star Trek, proving decisively that naming your pet after a 19th century writer is, in fact, something to be embarrassed about—possibly twice.)

I also learned that animal shelters aren’t really shelters so much as kitty death row facilities—just a long line, like the one at airport security, except in this one you don’t take your sneakers off at the end so much as you get dead.

Local vets hadn’t seen him either, though they were friendlier. Chekhov was a he to them, not an it.

Conveniently, I did this recon alone. My wife works during the summer, and I have the luxury of an academic calendar. I spent my mornings writing and periodically taking strolls through the neighborhood, searching for him, peering into backyards and garage windows while trying not to seem like a guy searching for a meth dealer. I tried to be covert about my concern. When my wife got home, she would ask about my day, and I would talk about other things—my writing session, my run, a good thing that I needed praised for, like running the vacuum. At some point most evenings, she would ask outright: “No sign of the cat?”

Then I would remind her how the cat went on seventeen-hour sleep benders; how he had no front claws and no testicles; how I’d watched him trying to catch a ladybug a couple weeks earlier until it landed between his ears and settled there, and rather than keep stalking his prey, he took a nap. “He has the survival instincts of a three-hole punch.”

This thought was almost worse. My cat sniffing around someone else’s house, discovering their recliner and thinking to himself, Hmm, this’ll do. I guess I’ll just live here now. This was treason.

It had been more than a week by this point. To her credit, my wife pretended not to notice how much I missed him or how nonchalant I tried to be about it all. Men are allowed to miss runaway dogs and we’re allowed to be sad if we have to put down a racehorse. Men are not allowed to miss cats. It’s preferable that we hate them and occasionally say mean things about them. For instance: The only good cat is the one that’s currently on fire.

Even at thirty, I maintain a more gruff, more romantic view of myself than I deserve. I teach writing and write stories, most of which include men with names like Ezzard, men who chew tobacco and get in fist-fights with other men about how to fix carburetors. I enjoy doing our home remodeling myself. I love the smell of lumber and the way sawdust clings to arm hair. I spent my childhood summers shooting squirrels (but rarely cats) with a pellet gun and boxing other kids in the neighborhood. By every measure I am supposed to hate cats. But I don’t. I’m strangely drawn to them—their independence, their complete lack of stress. Cats are like the childhood friend who you loved hanging out with because he was a notch cooler than you and often did not even notice you were nearby.

And so when our cat, which we needed to get rid of anyway, went missing, it showcased a serious bout of machismo-control inside me. I joked about how stupid he was, how he couldn’t survive in a wilderness with no cashmere sweaters to sleep on. I hid my attempts to find him. I slid into a neatly preformed gender role, as if it had my name in it. What’s worse is that I knew it, and I did nothing. This wasn’t a revelation so much as a slow burn acknowledged. And it dumped shame on me well beyond its stature. Still does. This is the first time I’ve admitted it out loud.

And the cat? Three weeks later he showed up in the window well of my basement office. He’d lost half his body weight and had a scabbed-over crater on his forehead. He scampered inside, and I scratched his ears for a long time. He ate a lot and then went to sleep on his recliner like nothing ever happened. I told him he was safe now, but he ignored me. We ended up keeping him. How could we not?

And me? I still pretend to dislike cats. I still can’t articulate my affection for ours without following it up with a demeaning joke.

For instance: How do you know a cat tolerates you? It stops peeing on your carpet. 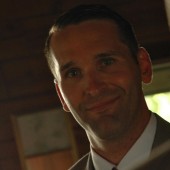