The summer mom said I put you in this world, I can take you out was the summer we shoplifted

too many candy bars from Pathmark

& you were still in the habit of talking back

when mom lectured us, which would make her

voice boom through the house.

this was also the summer she pulled me from a lake

made of light. the three of us were walking home

in her tiny black cart. we were still close

enough to Coney Island for you & i to dream

of detouring to the boardwalk & bathing

in the glow of its slow spinning ferris wheel.

we wanted food & when you are young

you make a game of everything, even hunger.

we decided to sprint ahead:

the first person to reach the house first

would get the other’s dessert.

i’ve yet to run that fast again; my hurtle

shaking every muscle & bone in my body

or worry about oncoming traffic

shine all over my face. the driver slamming his brakes,

his screeching tires, a tiny herd of swine squealing

in the night as mom’s voice cracked & we heard

fear, like a moth rustling out of its chrysalis.

that night she watched me break

into a fever & we all wondered if something

other than her put me in this world

& could it take me back out, if it wanted. 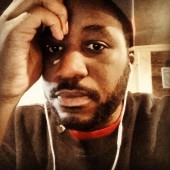 Mckendy Fils-Aime is a Haitian-American poet and educator living in Manchester, New Hampshire where he is a co-organizer for the wildly popular poetry reading, Slam Free or Die. He is a Callaloo Fellow whose work has appeared or is forthcoming in The Journal, Word Riot, Electric Cereal, Drunk In a Midnight Choir, and elsewhere.