I grew up in an old farmhouse, and, in the backyard, there was an old, abandoned well.

It wasn’t like the wells in picture books or in Disney movies, the wells with perfect, circular stone walls and little sloped roofs, buckets dangling from hand cranks with clean, unfrayed ropes and songbirds twittering around. Our well was a hole in the ground, covered with a few pieces of half-rotten wood that had been hammered, fifty or a hundred years ago, into a trapdoor. On one side, its hinges were rusting out of the wood, and on the other, there was bolted a heavy iron ring.

The old wood looked weak and rotting, barely even weight-bearing, but sometimes I’d stand on it and listen to it creak underneath me. I also tried lifting the trap door, but the wood was soaked and swollen with so many years of moisture, it wouldn’t budge no matter how hard I tugged on the ring.

But, one day, walking through the yard, I saw the trapdoor had been pulled open, and the mouth of the well was exposed, a yawning black hole in the ground full of murky, stinky shadows.

I looked down into the well. At the top, its walls were held in place with planks, but the planks stopped after a few feet, and beyond that it was just wet, dirty rock, all the way down into the darkness. My palms were sweaty, but I crawled on my belly to peer down over the edge. There was no bottom. I dropped a rock into the well, and then another, but I never heard either one of them hit water or anything else.

Then one of the rocks came back up. It hit me in the forehead and knocked my glasses loose so they almost fell into the well.

“Hello,” a voice called back.

“Is anyone there?” I asked.

“Is anyone there?” he answered.

Someone was living at the bottom of the well. He’d been there for years, he said, longer than he could remember, longer than my whole life. It wasn’t so bad, he said, once you got used to the dark.

Since I didn’t have many friends at the time, I spent a lot of that summer sitting by the edge of the well, talking, telling stories, telling jokes to the Well Monster. I’d bring out a radio so we could listen to baseball games. I’d describe girls from my school and tell him which ones I liked and whether I thought maybe they might like me back. I’d look up at the clouds and tell him what I saw. It had been so long since he’d seen clouds.

“I’m glad you’re my friend,” he said to me one day. “I’m wondering, do you want to come down here and stay with me for a little bit?”

I stared down into the darkness of the well.

“Is it scary down there? Is it cold?”

“Once you’re down, you’ll never want to go back up.” 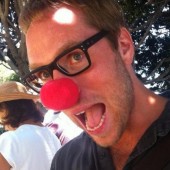 Christopher DeWan has published numerous short stories, in journals recently including A cappella Zoo, Bartleby Snopes, The Doctor T. J. Eckleburg Review, Jersey Devil Press, and wigleaf. He is a winner of The Binnacle's "Ultra-Short Competition" and has been nominated twice for the Pushcart Prize. Learn more at http://christopherdewan.com.