There’s Even a Town Called Hell For the past two years or so, my friend, the poet Stacy Cartledge, and I have been exchanging poems that evoke and parody the souvenir postcard. Our project began, as these things must, unseriously, as a way to remind ourselves of all the work we ought to be doing. I had picked up in a thrift store a book of souvenir postcards, each one perforated along the edges, and we saw our collaboration as eventually analogous to something like that— the gathering of touchstones rather than the travelogue’s mimesis of journey. After all, there are only a handful of more antiquated modes of communication that might have served as model–(Stop)–One consequence of living the speedy life of a post-consumeristic American is that the road trip seems so 20th century, doesn’t it? Which marks the postcard as older still. But the choice of model also reflected a deeper concern for the role in 21st century American life of an authentic poetics of place. With greater and greater conviction, we sought to investigate ways in which Americans think and have thought about the concepts of destination and journey, as modes of travel have become ever more efficient and routine.

But not routine for everyone. Living as I do deep in the Mississippi Delta, two hours by car from the nearest major airport, I am reminded, continually, that the ability to travel for pleasure is, perhaps now more than ever, dependent on economics. And the economics of the Delta have always depended on appropriation and abuse. This is true today, and most apparent in our celebration of the phenomenon of the Delta Blues, an art form whose long, improbable birth out of oppression is now tourist bait. As Stephen A. King argues in his book, I’m Feeling the Blues Right Now: Blues Tourism and the Mississippi Delta, “…official tourism narratives frequently conceal Mississippi’s traumatic past, privileging a sanitized historical record that largely omits the memory of sorrow and suffering that accompanied the experience of black life in Mississippi.” You can get a postcard of a juke joint in one of the many museums devoted to the blues in my area. The shack and surrounding land are monochromatic, but the commercial signs nailed to the door and front wall have been given neon reds, whites, and blues. Just yesterday, our governor was in town to break ground for the new GRAMMY Museum to be built across the street from where I sit writing this. Set to open in the summer of 2015, the museum may, in fact, tether all of the larger Delta towns more substantively than the river or Highway 61, both of which have been known to change course. The result will be a connect-the-dots tour of blues and rock history from Memphis to the B.B. King Museum in Indianola and back up to Elvis’s birthplace in Tupelo.

But the title of this brief essay comes from a line in one of the first “postcards” I sent to my friend. I had gone to my birthplace of Philippi, West Virginia to give a reading at Alderson-Broaddus college, which lies at the top of a small hill above the town. It had been ten years since I’d been back and, in writing to my friend, I felt inadequate to the task I’d set myself. The difference in geography between my first and most recent homes still unsettles me. In contrast to the way I’d felt about this place as a child, I found myself more comfortable in the town than atop the hills, which seemed vaguely menacing. It had everything to do with me. Does a particular place resonate beyond the articulations of its observers? The souvenir postcard, one of our strangest metonymies, fixes our sense of place in the context of time. But ordinary time isn’t exactly what I mean. The image on the front, the words of longing or friendship or love on the back, distill and preserve experience. To transmit that experience requires an elimination of all the typical frustrations and inconveniences of travel, the difficulty of getting there. The recipient’s imagination completes the transmission. You see the image, flip it over and hear the voice, constrained by space and time, of the someone who cared enough to send it to you.

Theorists have, on occasion, attempted to explain the metonymic expression as a way to avoid unnecessary repetitions. Why ask your friend if she would like another can of beer when you can just toss her a can? But this explanation does not account for the constrained power of such expression. At its richest it’s almost metaphor, but grounded in experience, not idea, grounded in a way that metaphor need not be. Perhaps it works the way our memories give us so much of our sense of self. 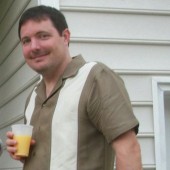 Mike Smith is the author of two books of poems, Byron in Baghdad and Multiverse (BlazeVOX Books) and a translation of Goethe’s Faust: A Tragedy (Shearsman Books). He is currently an Associate Professor at Delta State University.