Later, the Americans in Italy (there are two of them now: the third found a train to a city where there is a school and a bed and a girl and is gone) steal some bicycles and ride through the villages of the plain. It’s January in Piemonte and the fog is crystalline and biting and the light is crystalline and the roads are narrow and have no shoulders. When the horizon is visible, it is the shape of horrible mountains: the spines of vicious gods. They steal rosemary and sage from someone’s front garden. They loiter outside a church, hundreds of years old, curious and confused. Twice they cross the River Po and once, while crossing a drainage pipe connecting one ditch to another, an egret appears from underneath them. Flies alongside them on dinosaur wings. Swoops out over a field, into the mist. Becomes indistinct in the vapors until it, too, is gone.

(The first American is reminded of once watching spring robins thrashing earthworms in the grass of his yard, of the violence in their simple, beautiful bodies, of coming to the conclusion that, in nature, all creatures are currency to one another. The second American is reminded of nothing, only sees and, as a consequence, knows, so writes a poem about the bird’s sudden glide beside them.)

Later still, they stop in a village—it’s called Villa Franca—to buy pork chops from a butcher. The meat in the paper was a living animal just hours before: soon it won’t even be meat. It’s nearly dark now and as they ride home single-file, the first has the unique experience of watching a passing car hit his friend. There are lights and a silhouette of kicking feet, then a horn and the car is gone and both bikes are in the ditch. The one just watched his friend die at the hands and wheels of a stranger who will never not be a stranger, who is already gone on this narrow highway, but no: this is wrong. His friend is moving, is standing up, is fine. He veered just in time into the ditch. He survived. And for a moment, the two are frozen silent and numb in the increasing bite of the Piemonte night, uncertain of everything but this. They’ve survived. 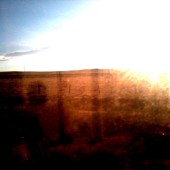 Douglas W. Milliken is the author of the novel To Sleep as Animals and several chapbooks, most recently the collection Cream River and the forthcoming pocket-sized edition One Thousand Owls Behind Your Chest. His stories have been honored by the Maine Literary Awards, the Pushcart Prize, and Glimmer Train, and have been published in Slice, the Collagist, and the Believer, among others. www.douglaswmilliken.com