It felt like I was in the wrong house, one that looked like mine, but belonged to someone else. When she found me drinking a glass of water in the kitchen, her eyes glazed over. It was my house all right, but I was there at a time when I shouldn’t have been.

“How much do we have?” She always cut to what mattered most and in that moment, what mattered most was money. She didn’t care how I lost my job. I stood in our kitchen at nine-thirty in the morning and that was enough. The how didn’t really matter.

“Some,” I answered, but saving money is hard when there isn’t any extra. “Don’t worry, I’ll find something.” I didn’t know how long it would take, but I said it anyway.

“And then?” She was angry but not at me.

“I’ll find something,” I said again, matching my tone to hers. “Where are they?”

I walked to the window and envied the innocence. “Who are the others?”

She shook her head. “Friends?”

“Where’s the camera? I want to save this.”

We sold it. About a month later, I was working again and with my first check, I bought another camera. Nothing too fancy, just something that worked. Some things are more important to save than money. And easier, too. 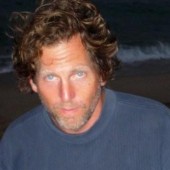 Foster Trecost started writing in Italy and he still writes, but now from Philadelphia. Sometimes he works paying jobs that involve corporate taxes. When he’s not doing that, he usually goes back to Europe.