Maria has a crush on me.

She is half Renaissance Italian and half Reformation Greek.

Her father is a fireman.

She wears lipstick on top of a large body; she has the grace of a ballerina.

This should appeal to me but I really don’t want to go downtown on her.

I like girls who are androgynous or WASPy and she fits neither category.

I traveled to Jamaicatown with her for the weekend because I assumed that we would slowly evolve into a relationship. The optimal word is slow.

Yes, after my Orthodox Jewish psychologist Harold had been an absolute prick and completely unavailable (i.e., falls asleep during the session), I pondered the short-time possibility of Maria. She was the psychological rebound. Usually when Harold’s a prick I scan the Aetna Health Insurance website for a new shrink; this time I thought the best form of revenge would be to meet a someone.

Maria had just purchased a huge house in Brooklyn. It was 1970s Victorian, and although my dog peed on her bedspread, she wanted me to move in.

“I’m the perfect person to get impregnated with,” she confided. We’d use her brother’s sperm and have blue-collar, intellectual babies.

While driving to “J-town,” which is what dykes and fags call Jamaicatown, she asked if I ever read Stone Butch Blues. She, like other box lickers who lust for me, assumes that I am a butch.

I wear homeboy hats and male clothes, but do so out of habit, having brothers and not sisters. I am a boy’s boy, not a lesbian’s butch. There is a difference: I hang out with gay boys at 12-step meetings. Does this mean I’m a butch or a bitch?

I would never wear a three-piece suit.

I cut my hair short.

If anything, I would get a sex change operation to become a gay man.

I used to be the aggressor in male-to-male relationships on phone sex lines. They liked my voice, which was boyish. I liked fem guys. But after years of therapy, this stopped and I couldn’t fuck them over the phone. Besides, eventually they want to meet you and I don’t have a scrotum.

I gaze around my office and observe that the men date big ladies and consider Maria.

I didn’t like her when she walked up to my apartment. She wore hideous makeup—a blowfish with Maybelline concealing her fins. I am worried that God will punish me for not liking thickset women who are inherently amphibious.

Perhaps I will become a chubby girl again. The Atkins Diet has stopped working. I just drank a Frappuccino and ate a delicious bun.

I have a membership to the New York Health and Racquet Club, except there is an annoying cleaning lady in the locker room who repeatedly says, “You don’t fit into your clothes.”

Maria drove me to J-town and said that we could ask each other questions, whatever came to us.

You must understand: people who want you will hang onto your every word because they can make hours out of seconds. They interpret your statements with more zeal than Joycean scholars analyze the author’s fingerprints on toilet paper.

Maria, the Greek/Italian, wanted to bed me. Obviously, I didn’t want to bed her. So the vinegar not mixing with oil began to muster.

When we arrived at our J-town rental (three hours later than most people because Maria was paying attention to me and not the speed of her car), we chose rooms.

Initially, she wanted the suite with the minimalist polyester design. I asked for the same room. She said I could have it (with chair and TV) if I let her watch The Daily Show. Although this was obviously manipulative on her part, I conceded, and said that I would surely permit her to use my space if she watched only TV.

That evening, after lobster and dancing, we got into night garbs.

I wore an Eeyore nightgown; it was on sale, post-X-mas.

She wore a shirt.

Her large cellulite particles unmasked themselves.

As I’ve said, rotund women think that because I am tall and have short hair and a deep voice that I am their hoydenish fantasy come true. They forget that I am attracted to young/angular beings. I am not unlike Philip Roth in this regard.

A supposed friend, Martha, orchestrated this Maria nightmare. I told her that I was not into Maria.

Martha, who is a renowned poontang expert, had advised me years ago, “You either dig a woman or you don’t.” If you don’t feel like using that Latin word on the lower female organs, you shouldn’t.

Maria had this ability to get me to agree to almost everything.

She got on my bed.

She looked into my eyes.

Maria has black hair and spends many hours arranging it.

She blow-dries to compensate for the fact that she is not anorexic.

She moves closer and says, “I like your eyes and your mind.”

“I’m not ready to sleep with you,” I whisper.

I hear her breathing inches away.

“What then?” I try not to renege on my refusal.

She wanted to hold me after we had eaten lobsters and danced. The other ladies thought we were a couple. They reached a state of jubilance when we left the bar.

“I’m not attracted to you.”

“My therapist wants me to be honest with people. So don’t fixate on me.”

Then, thereafter, there were many notes and stares until we departed.

We were right for each other.

We were both emotionally distraught people.

I should sleep with her.

Give her a chance.

Stop being religious about the ones who are not really icons.

Stop my quest, quite frankly, for the perfect Welleseley sister and shtup Maria wildly and live in Brooklyn impregnated with her brother’s blue-collar genes and send our kids to Catholic schools.

She’s perfect for me.

A social worker, she is.

“You don’t like being too familiar,” was one thing she said.

Since we are so alike, she feels that we must be soul mates and live our lives together.

There were four love notes sent, each the length of this story. They hinted, as love notes will, that we should meld.

Maria, who could have been an obese faygelah [2] with a bird named Bubka with compelling, sweet eyes, was completely devoted to me as a spouse.

She would have helped me paint my apartment and sand my floors.

She’d teach me to drive.

I believe that by my writing this, her grandmother, who died two years ago, is going to kill me. Or maybe her mother, who just died recently.

I have that problem with women. Their dead relatives often want to murder me. On the way back from J-town we stopped off at an obscure Connecticut McDonald’s where people dress in pearls and boat shoes, and the cashier said, “You’re scum.”

I was sure that an ex-obsession’s dead father was after me, for why would the girl behind the McDonald’s cash register call me “scum”? After all, my ex-infatuation had lived in this New England town, so I whispered numerous Hebrew prayers in the chain restaurant’s bathroom.

My father is dead and so is my grandmother, which means I have two people who are ghosts/cherubs looking out for me. Besides, my grandmother recently had an affair with Eleanor Roosevelt.

I never cease to worry that my MacBook will be stolen or blow up as I compose this tale in Starbucks. The spirits from Heaven are quite excellent at destroying things.

But I, too, have powerful friends in Heaven who whisper in God’s ears.

My therapist accuses me of not wanting intimacy.

“You should just roll over and get comfortable,” he insists, with a yarmulka dangling.

Well, my answer to all of these people is, quite frankly, that they can sleep with Maria if they want to.

I’d rather sleep with the Louise Browns[3] of the planet, or at least let them plant kisses, huge wet kisses, on my cheek. This is certainly more scintillating than a hug from Maria that would invariably crush me.

[3] Louise Brown, born in 1978, was the first test tube baby. She is chubby and married to a nightclub doorman, and has blonde hair and blue eyes. 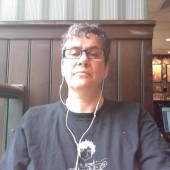 Eleanor Levine’s work has appeared in Fiction, The Denver Quarterly, Midway Journal, The Toronto Quarterly, The California State Quarterly, Prime Mincer, Happy, Penumbra, The Coachella Review, OVS Magazine, fortyouncebachelors.com, Milk and Honey: A Celebration of Jewish Lesbian Poetry (nominated for a 2012 Lambda Literary Award), Downtown Poets (anthology), New York Sex (anthology), The Wall Street Journal, The Washington Blade and other publications. She has work forthcoming in The Evergreen Review and Gertrude. In 2007 she received an MFA in Creative Writing from Hollins University in Roanoke, VA. Eleanor is currently a copy editor and lives in Philadelphia.