This Is All We Need When you’re twenty-five you develop encephalitis. You seize on our couch seconds after I dial our doctor because your headache is so severe. Our condo is no more than four hundred square feet, yet it houses seven emergency personnel. They ask me questions, but all I see is the clench of your jaw, the twitch of your body, your eyes rolling inside your head. Do you have anything on the stove? a paramedic asks as I follow him toward the ambulance. He is allergic to Tylenol, I say. Tylenol and hazelnuts.

Years earlier, you were jumped—your head smashed in, your back broken—and left for dead. It is what we connected over, our shared trauma. My trauma was different: the sudden death of a parent. You told me celebrities stop aging when they become famous because nothing is expected of them anymore. I told you we would stop aging because nothing was expected of us anymore either.

You were The Guy Who Got Jumped.

I was The Girl Whose Dad Died.

Maybe we are infamous, you said, and I shrugged because it didn’t matter. Nothing did.

The emergency room is jammed. Moaning elderly, jonesing addicts, pregnant women. The paramedic tells me it will be a long wait, that he will wait with me. Intake is prioritized, he says. The worst go in first.

You are admitted within ten minutes.

When we first got together, we were mostly loaded. I smoked weed during the day, drank beers with you at night. You popped painkillers. I kissed the scar on your head, wondered how far into your brain the bruising went, counted your vertebrae as we lay on our bed, from the first at the base of your neck all the way down to the seventh. That’s the one I broke, you said. That’s the one I broke when I fell.

You don’t remember falling though. You don’t remember anything about that night. Your memories are based on what you’ve been told, and the police told you it was your fault. The brain injury, the broken back, the bruises and contusions. Your fault.

Once, after a bunch of beers at the pub, I pictured you lying on the floor, battered and two minutes from dying, and I threw up in the bathroom sink.

A doctor wheels you into a separate room, tells me you need a spinal tap. You need to sign off on this, he says, pushing a piece of paper toward me. We need to rule out certain infections.

One night, shortly after we moved in together, we decided we didn’t need anything except each other. We spent the night throwing our belongings in the green dumpster out back, lay on the floor of our empty apartment, and talked about the feel of the carpet. This is all we need, we said. This is all we need.

You’ve been quarantined in a private room by the time the spinal tap confirms you have encephalitis. You’ve convinced the infectious disease team to do their consults in front of you, contemplate their hypotheses, their conundrums, and they’ve grown fond of your persistence. Your prior injury, the bruise on your brain, it saved your life, they say. Consider yourself lucky. We look at each other and laugh. Lucky isn’t something we’ve considered ourselves in a while.

Before all of this, I got up one morning and you’d disassembled my computer. Dozens of parts lay organized on our living room floor, from smallest to largest. Do you ever wonder what’s inside something? you asked. I shook my head, lit a joint. I’d rather leave everything alone, I said. 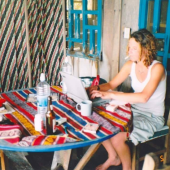 Jennifer Todhunter's stories have appeared in SmokeLong Quarterly, Necessary Fiction, Jellyfish Review, and elsewhere. She was named to Wigleaf’s Top 50 Very Short Fictions 2018, and is the Editor-in-Chief of Pidgeonholes. Find her at www.foxbane.ca or @JenTod_.