Inside the NBA’s ‘Big Screen’ If, like me, you watched TNT’s coverage of the 2015 NBA Playoffs, you’re familiar with the latest innovation in relation to discussing and understanding professional basketball: Inside the NBA’s Big Screen, which allows a commentator—usually Kenny “The Jet” Smith—to get up from the desk at which he’s sitting with the other commentators and trot over to the Big Screen. Once Smith arrives, he narrates a significant play from the first half as it unfolds on the Big Screen. When he wants to make a particularly salient point Smith yells “Freeze it!” and the action stops. Smith then walks amongst the frozen players, who are proportionate to him in size, and explains why what happened happened. The trotting, narrating, and explaining each take a moment, and Smith’s back is to the camera for all three. It’s not Smith’s fault—it’s not as if he’s giving a Powerpoint presentation, where he should already know what the slides say, or like he’s a weatherman in front of a green screen. He needs to be facing the Big Screen so he can know when to yell “Freeze it!” But wouldn’t it be better to simply show the play to the at-home audience while Kenny the Jet explained, from off-camera, what was going on, like they used to?

The Big Screen: (1) interrupts Inside the NBA’s pacing, as evidenced by Smith’s trotting, and (2) forces Smith to turn his back to the camera. The Big Screen introduces these deficiencies. This could be OK if the Big Screen compensated for that introduction with the simultaneous introduction or expansion of possibility, but the Big Screen doesn’t improve the viewer’s experience in any way. It does, however, do something new, and beyond new, incredible. The screen’s size and resolution make Kenny the Jet proportionate, which makes it seem as though he is literally freezing the players and then walking amongst them, like Zack Morris used to do to his classmates in Saved by the Bell. But while incredible, the Big Screen actually confounds Kenny the Jet’s purpose, which is to explain to the viewers why what happened happened, to give them an aerial view. That’s why Zack Morris’s “Time out!” works better than Kenny the Jet’s “Freeze it!”—Zack isn’t trying to give an aerial view, but is looking for a chance to directly address the viewer.

The first great technological innovations in the history of sports spectatorship, and spectatorship in general, were the senses—especially vision— and after that valleys. The senses are what make spectatorship possible, and valleys let many more people sense the action. Stadiums, radio, and TV follow in the tradition of valleys, although introduce complications as to the meaning of “sense.” But in 1955, the role of technological innovations in sports spectatorship changed permanently when Hockey Night in Canada invented instant replay. Until then, technology had either: (1) increased the number of spectators who could sense the action (TV ) and/or (2) improved the quality of spectators’ access to the action (TV moving from black-and-white to color). But while instant replay improved the quality (though not the quantity) of spectatorship, it’s most significant for its contribution to the increase in accredited sports commentary.

I was born in 1979, have been watching sports on TV since 1984, and can’t imagine a world without instant replay. It’s beyond my capacity. What did the announcers do in between plays—just talk to one another? In fact, yes, or didn’t, just like those of us watching along at home. Sometimes what they said was interesting, and sometimes it wasn’t. We were equals. But once they had the ability to replay, on cue, something that had happened in the past, they were experts whom we depended on for access to something we wanted: replays. There was a priestly class between us and the goods. Replays also, of course, made it possible for TV to generate sports-related material besides games. If instant replay had never been invented, Sportscenter would just be two people verbally summarizing box scores. Instant replay was required for the rise of the sports expert, the commentator.

The problem with the Big Screen is that it, unlike instant replay, doesn’t increase our access to any information, but actually hinders it. It’s novel but incompetent, which doesn’t nearly work out. My impulse is to blame the commentators for this self-indulgence, but I don’t get the feeling that Kenny the Jet, Charles Barkley, Shaq, and Ernie Johnson—like it. It seems as though it serves nobody’s interests, and if TNT is smart they’ll stop using the Big Screen until they work out the kinks. Or maybe they’ll decide that it seemed like a good idea but actually isn’t.

Inside the NBA’s use of the Big Screen privileges novelty over function, which isn’t inherently a problem—think of the pet rock—but in this case is. Additionally, and more importantly, the Big Screen forces the commentators, and particularly Kenny the Jet, into the role of explicator. This is boring and unnecessary—I don’t need Kenny the Jet to explain to me why what happened happened. Basketball isn’t that complex. There are basic things that you have to know, but those aren’t the kinds of things that Kenny the Jet’s going to address while freezing the Big Screen. With the current incarnation of the Big Screen, Inside the NBA has actually sabotaged what is probably its greatest strength—its commentators’ willingness to not analyze. Charles Barkley takes this tendency the farthest, and it is Barkley’s refusal to explicate that makes him so entertaining and interesting. For instance:

That clip is a lot of things, but one thing it isn’t is an explication of why what happened in the first half happened. The spectator isn’t talked down to but rather treated as an equal, and hopefully one with a sense of humor. Would you really rather watch Kenny the Jet’s back yell “Freeze it!” while he explains how a pick-and-roll works to watching Barkley’s making his colleagues cry with laughter at his outrageousness? 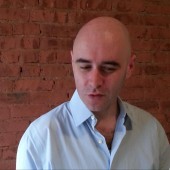 Greg Weiss's first book of poems, Interstate, was released in 2014 by CW Books, and he teaches writing at NYU.