Glenn lived for rainouts. He never went to the ballpark unless he knew the game would be canceled at some point. He’d watch the weather report, plan his day accordingly. He knew that on certain days, despite a horrific forecast, they’d open the gates, let people inside, sell as many hot dogs, beers, and gear—and rain ponchos—as they could, then call it. Once the gates opened, there was a minimum ninety-minute wait before they’d reschedule—MLB rules. Games like that happened only once or twice a year, a long, withstanding storm coming right after game time, but not before, not soon enough to cancel the game outright. As soon as Glenn predicted a for-sure open-gate rainout, he trodded down to the Brown at Kimball, transferred at Belmont, hairpinned back to the Addison Red stop.

On a rainout day, a fan could go to any ticket booth, in or outside the ballpark, and trade their rainout ticket stub for a later game ticket, for any date with unsold tickets. All you needed was the stub. What Glenn perpetrated on such days was a scouring of Wrigley’s aisles, rows, concourses, and garbage bins, a mission to pick up as many abandoned stubs as he could find. It was amazing how many people, after sitting in a downpour for an hour, two hours, even longer, would drop their stubs as they left the park. The PA announcer instructed them—begged them—to hold on to their stubs, exchange them for seats another day. Still, stubs adorned wet aisles, hot dog boxes, and drink holders. Free money. Glenn, on such days, would cash in.

“Let me get my supervisor,” the woman says, staring at Glenn through horn-rimmed classes, the kind with the little chains on the side that let them hang by her neck.

After several minutes—fans behind Glenn disappointed, impatient, and rained on—a man in a powder blue shirt and red tie appears in the window, asks Glenn how he came across three hundred eleven tickets.

“Those are for today’s canceled game,” Glenn says. “You can check the date, scan them with your little gun with the red lights. Everything’s in order.”

“Cub game today,” Glenn says. He points above the window, at Wrigley Field in general. “Cubs versus Lastros, called on account of rain. The PA announcer—I think it’s Paul Friedman—instructed us to turn our ticket stubs in at any ticket booth to received tickets for another game in their place.”

“Sir, do you have the credit card these tickets were bought with?” the man in the powder blue shirt says.

“If you’d give me back the tickets, I can show you how the fine print verifies what I’m saying. There’s nothing on there about showing you a credit card.” Glenn doesn’t have a credit card, hasn’t for nearly twenty years, but the man doesn’t know that.

The man in the powder blue shirt flashes a smirky grin, glances at the Ernie Banks statue off to Glen’s left. Glenn looks back at Ernie, too. The man then drops the pile, all three hundred eleven ticket stubs, into the wastebasket behind him.

“Next in line,” the man yells, and wishes Glenn a good day.

Glenn spends what money he’d had at a bar in Uptown. He only brought ten extra dollars with him to the game, thinking he’d have hundreds, even thousands, after. On a bad day, he’d make a few hundred. With three hundred eleven, he’d be set. At fifty bucks apiece—a low estimate, considering Glenn had patrolled the box seats—the tickets would be worth fifteen grand. Even if the broker behind the 7-11 gave him half face value, Glenn could pay his rent the rest of his summer, get a steak dinner somewhere downtown.

Glenn drinks up and stumbles away from the lake down Irving, hoping to pick up the Brown. It’s a long walk, past a couple of unrealistically enormous cemeteries. It’s after midnight. Glenn prays he has enough on his CTA card to get home. It would be a long walk otherwise. Glenn’s socks are still soaked.

Glenn gets on the train, plenty of fare to spare, settles in the center of the car. Two women dressed in skirts and heels sit across, notice him staring, and move to the door, stand until they get off. Glenn is alone for two stops, then a man gets on, wearing a red trench coat, the reddest thing Glenn has ever seen. The man sits where the women sat, right across from Glenn. As soon as the doors shut and the train moves, the man pulls out a gun and points it at Glenn.

“Anything and everything you got,” the man says. He is expressionless.

When Glenn does not produce anything, does not try, the man waves the gun around as if to hurry him. Glenn reaches into his pockets and pulls them out. The man makes Glenn stand and pull out his wallet. Aside form his Illinois state ID card, his library card, and a Jewel/Osco savings card, it’s empty.

“That rectangle in your shirt pocket,” the man says, pointing with his gun.

Glenn looks down and sees a ticket stub—his ticket stub—in his pocket. He pulls it out and offers it to the man. “They were rained out today. You could turn this in for another ticket. It’s worth thirty-seven fifty, the cheapest seat in the house.”

The man looks at the ticket, almost reaches for it, then pulls his hand back. Glenn recalls the man in the ticket window, pulling back the stack of tickets.

“That’s all you have?” the man says. A stress line forms across his forehead, collapsing into a V between his eyebrows.

“I don’t even want to give that up,” Glenn says. “I have the stub from every game I’ve ever been at, in my top drawer, a stack with a rubber band around it.”

“They didn’t even play today,” the man says. He uses the tip of the gun to scratch behind his ear, then replaces it into his red coat, relaxes back onto the orange seat.

“I was still there, inside,” Glenn says. He relaxes backward, too. “It counts.” 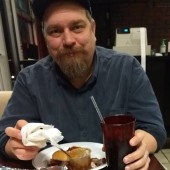 Michael Czyzniejewski is the author of three collections of stories and serve as Editor for Moon City Review and Moon City Press. He teaches at Missouri State University.