In June 1937, Dad harvested our potatoes prematurely for a blight that never arrived.

Saskia Meijers, my nemesis extraordinaire, told everyone in the village about his mistake.

In December 1938, Dad made my siblings and me stay home from school for an entire week. He didn’t want us to catch the flu virus, another epidemic that failed to turn up.

Saskia Meijers nagged me all winter. “Why does your father fear God so much?”

Her dad was more open-minded. He let her wear brown stockings instead of black. He let her play with her dolls on Sundays, which in the springtime she did demonstratively in our shared flower garden, where I could see her from my room. I wasn’t even allowed to read on Sundays.

In September 1939, Dad began digging in the backyard below the fruit trees to build a shelter that would protect us from the war.

“It will never get here,” Mr. Meijers said. He stood next to Dad, arms crossed, watching, judging, just like his oldest daughter, Saskia. “The Netherlands was neutral during the First World War and will remain neutral now,” Mr. Meijers said.

Our houses were close to each other and far from the village, so our two families ended up spending too much time together. Whenever we slaughtered our pig in the fall, I had to bring them our fattest sausage. All we ever got back was Mrs. Meijers helping us girls with the bleach when Mom was on her back again from yet another pregnancy.

Three of my younger brothers aided Dad with the digging before the freeze turned the earth to stone. All winter, Dad worked on fortifying the bomb shelter and bringing in supplies. He installed shelves and two long, retired church benches and a bell to let people know we were down there in case the ceiling caved. Always the optimist.

Saskia Meijers told everyone in the village that he was a fool.

In May 1940, the Germans attacked the Netherlands. The air raid alarms rang early in the morning when we were still in bed. Dad collected a few items from the house and sent Mom and my siblings to the shelter.

He grabbed my arm and said, “Get the Meijers.”

He looked into my eyes and asked me calmly to do the math on two long, retired church benches.

When we passed the antique shop for the second time that day, there was another painting of a Dutch windmill in the window, substandard as usual.

Although Albert didn’t talk anymore, these were his words. The appeal in his eyes shone clear as day.

I took it stoically. Having been dragged inside the shop again and again during the past year, I’d gotten used to buying him sloppy art.

The place was deserted, except for the knickknacks and the owner and us. I chatted with Ellen as though I didn’t suspect her of baiting Albert. He couldn’t resist a windmill—one of his addled obsessions—and being his wife, I couldn’t resist Albert. The paintings were a tax on our retirement, but something in me always gave way. I had taken to wearing thicker sweaters indoors to save on the gas.

Ellen bubble-wrapped the package, her face the incarnation of gloating. Where did she keep finding these windmills? Perhaps it was some type of witchcraft. Her shop always smelled suspiciously smoky and sweet.

When I handed her my money, I noticed a paint stain on her desk, a stain that hadn’t been there that morning. The blue corresponded to the blue of sky that took up most of the painting Albert now pressed to his chest, a painting that had seemed amateur and hastily made. I wasn’t surprised—I’m a seasoned cynic and almost envied her shamelessness—but my mind perceived a challenge. When confronting a hungry wolf, guile is your only weapon.

“Do you happen to have an easel for sale?” I asked.

Ellen looked like a pine that had been struck by lightning yet still had its needles.

Outside, all was peaceful, and Albert and I made one last stop to get supplies before going home. For the rest of the day, life was as easy as looking at his face, nearly transparent, beauty flowing from his brow. He painted one windmill after another, each as familiar as my dreams, until there was nothing left of the light.

* After the stories in “The Voice Imitator” by Thomas Bernhard

Our widowed father, who took my brother and me sailing on the Mediterranean each year, stood on deck reefing his jib when he reported a small vessel to starboard—too small to be so far out. I took the binoculars from the cabin and peered. The boat was a rubber inflatable loaded with passengers waving and calling. For help, it seemed. My brother and I took turns watching them. The travelers, signaling wildly, looked untrustworthy. Was it a ruse?

“Pirates leave no witnesses when they steal your ship,” my brother said.

Our teenage imaginations soared and fed our fears. There was an army of menacing clouds on the horizon.

“My first responsibility is your safety,” our captain father said.

He turned his yacht around, back to the coast, sails flapping like wounded wings. I switched on the engine for extra speed. We forgot about our almost-encounter when forty-knot winds whipped the water into foam. Waves rose to enormous heights. The crew held on tight as the storm built to its dark intensity.

We reached the harbor after the downpour broke. With burning eyes and wrinkled hands, we moored our ship as best as we could. The night delivered furious gusts and thunderclaps, an inconsolable sky.

In the morning the storm had passed. My brother and I went to comb the beach—the sea often spits up treasures. But the path was blocked by orange tape. There had been an accident, a police officer explained. A boat with refugees had capsized. Their bodies had washed up on shore.

“What tragic misfortune,” she said. “All these pleasure boats out yesterday and nobody saw these people in time to pick them up.”

I met my brother’s eyes.

We never told our father. 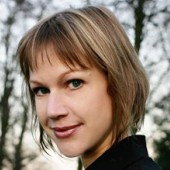 Claire Polders is a Dutch author of five novels. Her stories and essays are published wherever they are appreciated, in places such as TriQuarterly, Denver Quarterly, SmokeLong Quarterly, and other reviews and magazines that may not be quarterlies. Together with her husband, she wrote A Whale in Paris (2018, Atheneum / Simon&Schuster), a novel for younger readers set in WWII. You can find her online at Facebook, Twitter, or www.clairepolders.com.