Everything wrong with the world was encapsulated in that sentence. “Blue is not blue,” said Nora. She gestured at the stacks in front of them. “Blue is aqua, indigo. Robin’s egg, turquoise, navy, sky.” Her slicked lips lingered on each plump word, sucking its juice free. “Danny says go with blue, as if that solves it – ”

“You’re getting more like Mom every day. C’mon, it’s hot in here, and the potpourri smell is giving me a headache.” Molly scraped damp curls off her forehead and sighed.

“But blue is just the beginning – “

Nora shook her head. “This is why you and Tom should move to the city.”

“You need to expand your outlook. Take it all in! Discover all the different shades of blue.”

“You’re crazy! And you’re solving my life when you’re supposed to be picking out towels.”

Nora tossed her head; her straight blonde hair obediently reframed her face. She fingered a turquoise double-thick bath-length cotton, monogram optional. “I can do both.”

She paid for the coffee, too. Nora always paid. At the beginning of her visit, Molly had said here, let me, and fumbled in her purse at each register. But Nora was faster, her movements smoother. She’d scooped up her change and drank a third of her coffee before even reaching the table.

Molly groaned at the sight of the ginger cookies, big as saucers, glistening with sugar. “I’m getting fat and you don’t care.”

“I’ll be sagging like an old sofa cushion before long.” Nora had avoided the word “trying.” It implied a lack of control she just wasn’t buying into. They would have a baby. It was time.

That and the new house were Nora’s projects now. Nora appreciated projects. As she often said, Nora was a person who preferred Christmas Eve to Christmas Day. She liked the planning, the looking forward. If she had her way, gifts would never be opened. They’d stay under the tree, demure in their ribbons, never revealing. Always promising.

The bookstore was one they hadn’t visited before; a mall outlet, windowless, full of restless yellow-white light. Steady as an unblinking eye.

They knew without consulting each other what they would do. Nora worked her way through Literary Criticism. Molly glided through Biography and Poetry. They met in New Fiction, finished in Magazines.

“Remember breakfasts when we were little? You’d have your nose stuck in a book. I’d be babbling away, trying to get your attention.”

“Nancy Drew.” Nora smiled. “I was always in the middle of a Nancy Drew.”

“That’s why I learned to read, you know,” said Molly. “So I could be like you. Nose stuck in a book.”

“Oh, yeah! You were transported. Just not there.” She petted a glossy magazine cover absently. “And then when you wrote. Mom would whisper, Nora’s doing her stories. We’d tiptoe past your door.”

Nora rolled her eyes. “In my romantic youth.”

“Oh, they were great, those stories! The heroines were always racing around, falling in love, drinking cocktails at the Ritz or something…”

“Look, the new New Yorker is out.”

“And then –“ Molly sighed dramatically and put a hand to her brow. “Then, there was Nina.”

“Give it a rest.” Nora was pretending to read The New Yorker.

“Nina, the jade-eyed heroine of ‘The Crack In The Stained Glass Window,’ that classic American story by Miss Nora Jane Rush!”

A hesitant cough made them both look up. “Oh, sorry! I didn’t mean to, y’know, eavesdrop.”

He was younger than Molly, Nora decided. Twenty-three at most. His face, long and pale, was the type that would look young until it looked old. No in-between. Tall, with an apologetic stoop.

“You’re a writer, huh? Are you published? I was curious because I’m a writer too, I mean, I’m trying to be.”

“Yes you are! Or, were. That story I was talking about? It was published in American Fiction,” said Molly.

The young writer bent down and lifted a magazine from the lowest shelf in his long, slender fingers. “You mean this American Fiction?” He handed it to Nora.

She studied it. “It’s so different.”

“From how it used to be.” She turned pages gingerly. “Look, it’s so thick, so many ads, and the paper’s so shiny. It didn’t look like this when I was in it.”

“About a thousand years ago.” Nora replaced the magazine.

Once Molly and the puppy had wandered off together, deep in debate over the merits of Kindles, Nora retrieved the magazine. It felt cold and slippery. Without knowing why, she tucked it under her New Yorker and took it to the counter.

The next morning, Nora stood by her bedroom window feeling dull, watching nothing in particular, while the light grew and changed. Morning was her domain. She wished it wasn’t. Wished that one day she would wake up and the curtains would be opened and the radiators hot, the newspaper waiting on the kitchen table and the coffee maker sputtering away. Wished that someone else would steer the household into the safe harbour of daylight. Just once.

Danny would be asleep in his hotel room now. His flight home wasn’t until this evening. She missed him in an enjoyable way, hugging his perfect memory to her, ragged toenails and clots of damp whisker in the sink conveniently forgotten.

She peeked in at Molly. In sleep her face was pink and pudgy. Damp snores whistled from her opened mouth. For a confused second Molly became Nora’s daughter, not yet born, not even conceived; the future spiralling forth from this moment, this small room, this watched space.

The kitchen sparkled and hummed, vying for her attention. The pink veins in the marble countertops, the pale sunlight breaking on the bells of the wine glasses. She was still a tourist in here, standing and gaping and forgetting why she had come in. She washed each dish as she used it, closed cabinets so delicately they always swung open again.

Once the coffee was made, she took her mug and wandered into the shaded living room. The new towels sat, folded on the coffee table. Robin’s egg – yes, she still liked them. She plopped down on the sofa and began to daydream bathroom color schemes. Something caught her eye, something shining damply on the dark rug. She swooped down and picked it up. American Fiction.

Why had she bought this? It embarrassed her, faintly. Some weird little burst of pointless reminiscence. Nervously she flipped through its pages, breathed its smell. In fact, it didn’t even work as nostalgia. It was like bumping into an old friend and finding her utterly changed, plump and prosperous and drenched in expensive perfume. Making you wonder had you changed too, how much, and in which direction?

She gulped more coffee. Sadness fluttered in her throat, and she sat very still and tried to work out how it had gotten in.

Did she miss writing? A question she habitually flinched from. Molly and Mom thought she ought to miss it. This annoyed her. Anyone claiming to know how she should feel annoyed her. Besides, they overlooked the fact that she had harnessed her creativity, used it to more pragmatic ends. Teaching. She was a very good teacher. This was taken for granted, of course. She was always good at everything, so she got less credit. Things come naturally to Nora.

No one had understood what writing had cost her. How hard it was, how lonely, how it set her apart from everyday life. Observing from a distance.

So, no. She didn’t miss it. At least, not the process. The product? Maybe. Those dark, delicious lines of type, belonging to her as nothing else could. Her own name, pulsing a secret signal to her from the page. She whispered the closing lines of her story, “The Crack In The Stained Glass Window.” Remembered for all these years. The words shivered in the air. And she loved them. She was in love.

She had never decided to quit. After that first story was published, she had worked diligently on others. She’d tried hard, she really had, but the words were just words. Brittle as dead, curling leaves. It broke her heart. So she wrote less, and less.

Other things took over, too. Danny. First year teaching. The wedding. She had always meant to return to the writing. It was only today, this morning, that she knew she never would.

She put her empty mug down carefully and felt for the window shade cord. She didn’t tug it, only teased it through her fingers in the sickly half-light. She had not left writing. Writing had left her.

The magazine lay beside her, open to the first page of a story. The title, written in a huge, square-cut font, was “Time’s Shadow.” Nora dismissed this at once as being too metaphysically groovy, sounding like it meant more than it did. Above the title the page was blank. The blankness bugged her. So she doodled her name all across the empty space. Nora Rush-Jesperson. Nora Jane Rush. Nora.

She glanced up, noticing the freshly painted living room walls. Butterscotch. She had insisted. Bolder than beige. Nora nodded to herself.

She looked back down, and her name was a flock of preening birds against a winter sky. 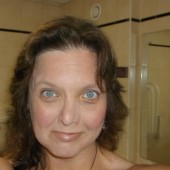 Susan Millar DuMars published a book of short stories, Lights in the Distance, with Doire Press in 2010 and a chapbook, American Girls, with Lapwing Press in 2007. She has been the recipient of an Irish Arts Council Bursary for her fiction and has also published three poetry collections with Salmon Poetry, the most recent of which, The God Thing, appeared in March 2013. Her work has appeared in publications in the U.S. and Europe and in several anthologies, including The Best of Irish Poetry 2010. Born in Philadelphia, Susan lives in Galway, Ireland, where she and her husband Kevin Higgins have coordinated the Over the Edge readings series since 2003. She is the editor of the 2013 anthology Over the Edge: The First Ten Years.