Both of my parents were dreamers. This is about all they ever had in common, as far as I could tell. One wanted to act. The other wanted to write. They pursued these dreams by practicing, by doing, by being, and, I can only assume, by loving. Loving their art. Loving each other. These dreams surrounded them like bubbles, swirling, iridescent, ripe for bursting. I suspect that their love may have been as much with the bubble as it was with the person in the bubble, pretty as they were.

One of my parents let the dream grow large. So large it began to levitate, rising up through buildings of steel and glass, then drifting away across the country, surfing along unclouded currents of fantasy, catching the sun in its swirl. The other let the dream roll away into the corner of the living room, where dust from the sunbeams settled on it, muting its iridescence and matting its shine. Perhaps when it all comes down to it, the divergent fate of their dreams became the fatal fissure that ended their marriage.

It’s one of those things I can never know.

It is almost too cliché to gender the treatment of dreams and the way the post-Vietnam man grew his hair long, spread out his arms, and ran wild, dancing into his future, while the woman raised by a 50’s housewife still smoothed her skirts and tucked herself into the stiff mold her mother had given her, assuming it was durable enough to last.

One of my earliest memories is of being with my father in our living room, dancing to the music he played on our record player. My favorite song was “Tiny Dancer,” which was still new in 1972 and when he put the needle on the track, I would stand in the middle of the giant, sapphire blue carpet in our living room and spin, circling around and around in tighter and tighter circles until I was dizzy and fell down. Lying on my back, the ceiling would continue to spin in a soft, vanilla ice cream swirl, the room carrying on the motion as I lay there, adrift, waiting for the world to become still again.

Then I would leap to my feet and demand that my father “play it again!” And of course he would. Who wouldn’t appease a child in this way? Who would deny her music? I was, after all, a tiny dancer myself. A dancing, spinning three-year-old dervish of blonde curls, a literal “blue jean baby.” I was a parent’s dream. You should have seen me. I could dance like this all day.

Only later would I realize that I had been dancing to the collapse of my parents’ marriage, carried by the sweet piano chords of the fantasy and its inherent contradictions. The seamstress is not in the band. She will not become the L.A. lady, the woman who follows her man. She will stay home, mending the fraying fabric of their lives. Her busy days will be acknowledged but not witnessed. Her sheets of linen, always ready, would, in time, be left untouched, the shroud of one dream sacrificed for another.

The song, and my parents’ marriage, is the embodiment of the fantasy of youth, and if it’s driven by love, it’s a wistful, childish love that seems to know it’s already doomed. The boulevard may not be that bad, but there are too many headlights. Too many other places to draw the music man away.

Nevertheless, my memory of dancing to this song with my father at the turntable are some of the fondest memories of my childhood, even though he would be gone within a matter of weeks, days, maybe even hours. We didn’t live in the house with the oceanic blue rug and the ice cream stucco ceiling very long. My father would be on the road to L.A., but my mother, who was probably watching from the kitchen door just beyond my attention, was likely grateful that I was too busy dancing to be aware of the fights, the tears, and the accusations whispered in the background.

After my father left, I lay on my back on the big blue rug in silence. It was quiet, and I looked out the window at the night sky and the song became something new to me. No matter how old I got, the song became a beautiful bubble of my childhood drifting in the ether, a reminder of a dream that had once been real. 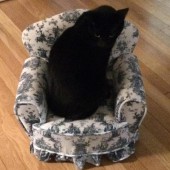 Christina Kapp's short fiction, poetry, and essays have appeared in numerous publications including Passages North, Necessary Fiction, The Forge Literary Magazine, Gargoyle, PANK, and apt. She teaches at The Writers Circle Workshops in New Jersey. Follow her on Twitter @ChristinaKapp.