The Blue Girl is a haunting look into family secrets and a cautionary tale for those who leave the most important truths unsaid. A town with a secret is nothing new. Even a town with a myth, a legend, or some unexplained fantasy is well-worn territory. But you probably haven’t read anything like Laurie Foos’ latest novel. Foos has twisted the idea of a small lake town with a secret and bent what it means to introduce the fantastic into our world. The blue girl herself isn’t the town’s secret. Instead, she is the confessional for weary mothers who bake their secrets into moon pies and feed them to the little blue girl.

While the story begins with the blue girl almost drowning, we quickly find the secrets began long ago. Irene, Magda, and Libby are mothers who engage in the ritualistic act of baking and sneaking off into the night. The deed calls back to the sacrament of reconciliation, where there is some sense of anonymity and privacy. The mothers visit with the blue girl one at a time, feeding her their sins. They show up on specific evenings and can only enter the house at night. Once they’re ushered into the blue girl’s home, they enter her bedroom in an arranged order and wait quietly as each mother gives away her secrets. When the night is over, they drive back to their families and wait to do it again the next week.

While Foos has weaved the fantastical into the mundane, it’s the ritualistic nature of the characters that grounds the novel. They do not bring the girl secrets of murder and intrigue, but the everyday happenings we carry within ourselves:

Colin no longer speaks to any of us. I know I should talk to Audrey about her father’s endless games of imaginary basketball, about her friends, about the blue girl, about the troubles I know she is carrying, but I also know better than to press her. And so, on Tuesday nights I wrap the moon pies in aluminum foil and tell myself that I will be able to save my daughter – that I will be able to save us all – once all the secrets have been eaten, digested, and somehow done away with.

Foos embraces the struggles of identity, strained relationships between mothers and daughters, and the men who seem physically present yet mysteriously distant within the lives of their families. While the male characters don’t receive their own chapters, they are well-developed and compelling in their flaws. The mothers and daughters seem to carry the burden of each household almost as silently as the blue girl herself.

Each character who encounters the little blue girl becomes obsessed, but usually because she offers redemption. Audrey, who initially saves the blue girl from drowning, continues to seek her out. She can’t find any rest, and obsessed over how big she felt when she breathed life back into the blue girl. Irene, Magda, and Libby are desperate for freedom, and the little blue girl unburdens them:

She takes my hand and moves it toward her mouth, and before I can stop her, she is licking my fingers, her tongue twirling around my knuckle and then lapping at my palm. Her tongue is quick, darting in and out, and when I finally pull away, she sighs and leans back against the best. My hand is clean. All the way home, after waiting for Libby and walking back down the dark path to our cars, all I can think is how clean my hand feels, that never have I felt so clean.

Even though her characters seem to be drowning in regret, fear, and secrecy, Foos allows them to breathe. Foos tells the story from the perspectives of six women who make three mother-daughter pairs. It’s through these six perspectives that we see the entire narrative. We take in the happenings of the town, the school, and the families. Foos keeps her prose incredibly clean and concise. Though we’re regularly jumping between points of view, the reader never feels lost in the swirl of events.

In a novel that switches between perspective regularly, voice and tone become essential to the story’s success. Foos establishes each character’s voice masterfully through individual quirks, concerns, and fears. The older women are plagued by a desire for freedom they once knew. They speak and think with the wisdom that comes with experience. The less-developed teenagers worry about the present and future. And while the teenagers experience many fears and a desire for freedom, they have not resigned themselves to fate. The young women can still be moved to action. They can still change their course and become who they need to be. We see this most with Audrey and her first act of saving the drowning blue girl while the other simply stand and stare.

Foos constructs a tale dense with almost-too-honest glimpses into ordinary families. Foos doesn’t shy away from expressing the hardships of raising a mentally challenged boy, or living with a husband who has had a breakdown, or disciplining a typical teenager with hands and desires faster than his mind. Each challenging scenario is a burden, and one the mothers wish to keep secret from the rest. Unfortunately, secrecy only manages to turn these issues into afflictions that gnaw at the psyche of everyone involved.

The Blue Girl is a novel shaped from the crumbs of life and the cream of imagination. Foos sweeps up the things we leave unsaid in our families and forms them into a rich, dangerously sweet narrative that sits in your gut. We are invited into the lives of these six women who, only together, give the reader the full view of what’s happening in the town. Each sentence asks the reader to consider the cost what we carry silently, as we have no blue girl to consume our sins. It’s no secret that Laurie Foos is a brilliant storyteller, and The Blue Girl is well-worth your time. 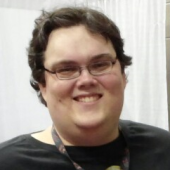 Matthew O’Dwyer is a creative writer, poet, and fantasy enthusiast. He studied English and Creative Writing at Stetson University and earned his Master of Fine Arts in Writing Popular Fiction at Seton Hill University in Greensburg, Pennsylvania. Matthew currently lives in Tallahassee, FL with his two best friends and their two cats.