This is the boy’s first time on an airplane. They must cross several states to reach his mother’s brother’s house, to see a side of family the boy has only heard about, but has never met. The strange side. All his life his mother has made fun of them, but now, she seems nervous. He wonders about take-off.

It’s nothing, she says, swiping at her phone. You’ll be fine.

When she reaches him, she says, I like your shoes, which makes all of the blood in his body rush to his face at an alarming speed. He’s wearing stupid shoes, he thinks now, with the super shiny orange Nike swoop. He remembers begging his mother for them.

His mother has been married twice before. Already, she’s made friends with the man sitting beside her. She calls herself a people person. The boy thinks he must be the opposite: He prefers to be alone. Did his mother pick the middle seat on purpose, to talk to this man? The boy feels disappointed. He thought she had given him the aisle seat because he frequently gets Restless Leg Syndrome and will probably need to walk around. He thought she was only thinking about him. The man talking to his mother has a face like a mannequin and the boy knows not to trust him.

Last week, the boy stayed with his father. His father has a new girlfriend. They went to a fancy restaurant where a valet parked their car and the girlfriend said things like, The fish is expertly cooked but far too salty. When he returned home his mother asked about the girlfriend. Mediocre at best, the boy said, because he knows this phrase makes his mother laugh, and it did.

That night at dinner the boy’s father told the new girlfriend that he was tricked into marrying the boy’s mother. How is that possible? His father wasn’t blindfolded when he met her, and he didn’t pick her randomly from behind a numbered door. He’d met her at his boss’s Halloween party (Oh, to picture his father dressed up as a Blues Brother!) and he’d asked her out according to his own free will. The boy’s mother probably wore her hair down. His father probably had a streak of sweat beginning to show through the back of his shirt. The boy has pictured it many times. Not so long ago, the boy’s father said he felt bad for saying anything unkind about the boy’s mother, no matter how mad he was at the time. That was wrong, his father said. She’s your mother, after all. Still, the boy can’t forget anything his father says. It troubles the boy: He forgets nothing.

The boy wishes he were on his way to see his father’s parents, whom he loves. They are his good side of the family. Every year, they take him to the Wild Animal Park in San Diego and to the LA County Fair. Last summer, they let him have pizza covered in ranch dressing for dinner three nights in a row. And it wasn’t because they forgot about making him dinner, either, it was only because they wanted to see the boy pleased. After the pizza, his grandmother asked him to try her cauliflower, which he did, without complaint.

Now the flight attendant is standing just in front of the cockpit, talking about safety. If you just direct your attention to the video, she’s saying, but the boy would rather watch her. She is holding an oxygen mask, smiling as though there’s nothing to fear, and the boy feels his pulse bang in all of the wrong and tender places—against his wrists, his neck. He reaches for his mother’s hand, her skin as cool and smooth as the inside of a shell. His mother is laughing at something the plastic man said and her hand is a small, dead weight—useless.

The boy feels faint. The flight attendant is looking at him. The flight attendant is moving her mouth and gesturing in his direction. If they married, what would they talk about? He can never think of anything to say to the girls in his class. Whenever he watches couples huddled together, at the movies or at a restaurant, he wonders what they are talking about. If he ever gets a girlfriend, he thinks he might have to carry around a book of conversation starters, or at least have a few memorized.

In case of emergency, the flight attendant begins. Now the boy only wants his mother’s attention. He only wants her to turn away from the man and tell the boy how it will feel to take off. He figures he will feel weightless. He figures he will soon forget that he’s in the air and not on the ground as usual. He tugs at his mother’s arm—hard, then harder still—a whiny noise in the back of his throat. What, she says, you’re fine. The man next to her is whispering in her ear. The boy’s embarrassed, for himself and for his mother, too, but he knows this feeling will also pass. The plane jerks into movement, and the future has already arrived. One thing the boy knows: It is easy to get used to things. Nothing ever stays strange for long. 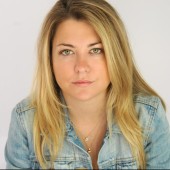 Amy Silverberg is currently a Doctoral fellow in Fiction at the University of Southern California. Her writing has appeared or is forthcoming in The Southern Review, Necessary Fiction, Hobart, The Collagist, The Tin House Open Bar, The LA Review of Books, and elsewhere. She also performs stand up comedy around LA. You can follow her on Twitter @AmySilverberg.