One time I fled trouble I ended up finding it. I was researching a novel about Sahraoui nomads. I wanted to visit their guerrilla camps in Tindouf, in the western Algerian desert. I wished to take a break from Ann, and our house by the saltmarsh, and our habit of squabbling to evade darker issues. The Algerians refused me clearance for Tindouf but there were no restrictions on flying south, into the deep desert. I fancied I could sneak west from there. The plane that took me was a sand-blasted 737 that flew from one tiny oasis to another tinier oasis and took all day doing it. In between oases were a thousand variations on tan: dunes, ergs, ochre mountains, dark riverbeds, gravel plains that stretched for fifty miles. Some riverbeds were lined with brown vegetation. One oasis was a military airfield and the pilot warned us not to take pictures. By then I was sick of being told what to do by soldiers so I hid my camera under my shirt and snapped a picture out the porthole. Five minutes later soldiers came aboard and escorted me off the plane. The airport consisted of two trailers—painted in stripes—a tall antenna and a windsock. The captain in charge was not angry. He was a chubby guy in a neat uniform who must have made a bad mistake himself to be assigned to this place. He asked me if I’d taken pictures and I said no. He asked for my film and I gave him an unexposed roll. I don’t know what the hell I was thinking. There was nothing at that airfield. The captain sat and watched me. I was sweating, I felt I might puke. I thought of how the junta lock up opponents in secret camps in the desert. I wasn’t thinking of Ann, or how we fought. I wasn’t thinking of her daughter, whom I had come to love, or the thousand shades of green in the pines and salt grass leading down to the harbor; but the idea of them underlay my fears, a measure of what I’d put at risk. Finally the captain nodded to his squaddies, and I was escorted back to the plane. Months later, after Ann threw me out, I developed the film. My memory was not wrong. There was nothing at that airfield, nothing there at all. 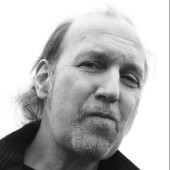 George Michelsen Foy is the author of twelve novels (under both last names) and two nonfiction books. His latest book, Zero Decibels: The Quest for Absolute Silence came out in 2010 (Scribners). He is the recipient of a National Endowment of the Art fellowship in fiction; his novel Art & Practice of Explosion was runner up for Foreword magazine's novel of the year award. He has been an investigative reporter, commercial fisherman, news photographer and underground tunnel worker. A founding member of the performance/reading group FlashPoint, he teaches creative writing at NYU, and divides his time between coastal Massachusetts and New York.