True Outsiders: A Review of Weird Girl and What’s His Name by Meagan Brothers In this fresh-voiced YA novel, a pair of friends bonded through isolation begin the painful process of claiming their individuality. Author Meagan Brothers drags us back into adolescence unromantically (well—sometimes just a teeny, sweet bit romantically) and reminds us, with insightful world-building and bursts of clarity, that the all-too-human people accompanying us as we come of age are often both more and less than they seem.

Publisher Three Rooms dedicates its usual list to literature that challenges conventions. Weird Girl seems quite a departure at first, written in a highly accessible voice that evokes Holden Caulfield and his modern-day descendants in the world of literary protagonists. Most novels aspiring to Catcher in the Rye comparisons don’t stand up to scrutiny, though, offering characters that may be offbeat, quirky or melancholic rather than deeply challenging. Rory and Lula, the dual protagonists of Weird Girl, are true outsiders, facing the annihilation of identity that goes with Holden Caulfield territory… although the duo would prefer comparisons with Mulder and Scully of vintage T.V.’s The X-Files.

“Dana Scully, in case you’ve never seen the show, is [Fox] Mulder’s skeptical female partner… But even though she was originally assigned to the X-Files to poke holes in Mulder’s work and discredit him as an investigator, she ends up becoming his ally. Well, more than allies. Over the course of the show, they pretty much become soul mates.”

Rory and Lula’s parallel introduction as possible “soul-mates” spurs the novel forward thrillingly, but the longer journey relies on a plunge into more shadowy developments. On the surface, Rory and Lula are nerdy kids blogging about their mutual fanaticism for The X-Files, memorizing dialogue from entire episodes, speaking in X-Files code. Scratch that surface and you begin to see the pain that accompanies other common experiences: Lula was abandoned by her mother years ago to her grandparents’ retirement community, leaving her with a postwar vocabulary that only cements her outsider status (“You bet your bippy”); Rory’s single mother, an abusive alcoholic, vents her rage by sleeping with sales clients and compulsively rearranging furniture. And unknown to all but Lula and only one other person, Rory is gay. His need for intimacy and his conflicting fear of being revealed keep him in an off-balance romantic relationship, hidden even from Lula, that threatens to isolate him even more. Despite the damage, Lula and Rory appear to share their neighbors’ comfortable middle-class lives, and are treated as non-entities in their staid Southeastern American town.

“Lula was more likely re-reading one of the Hitchhiker’s Guide or Lord of the Rings books for the third or fourth time. This was part of why other kids at school called Lula ‘Weird Girl.’ Or, sometimes just to change it up, ‘Queen Weird.’ …([T]hey allowed me a strange sort of acceptance. They weren’t actively mean to me or anything, despite the fact that I was a big fat guy and therefore easily make-fun-of-able. For the most part, my classmates politely ignored the inconvenient fact that I kind of, you know. Existed.)”

Damaged or not, Lula and Rory start out in a garden, of sorts, that of plain-and-simple best friends. The first part of the book, narrated by Rory, draws us into that state of grace, in which he and Lula face joys and struggles together. But conflicting romantic demands and family gravity pull Lula and Rory out into the world and conspire to threaten their friendship. Rory is more and more often alone until a cataclysmic argument with Lula, their last scene together in Part One. Throughout the rest of his narrative, Rory is not only alone, but suddenly aware of how ephemeral his world with Lula was. Anyone who’s grown up knows that this kind of grief feels like the end of the world, and Brothers offers an apt analogy for it in a powerful fantasy X-Files scene where Mulder, Scully, and Rory must solve the mystery of Lula’s murder.

Appealing and wrenching as Lula and Rory are, and as reluctant as a reader may be to venture outside the darkened room where they huddle watching X-Files reruns, Brothers is able to lure us out to the story’s broader and transformative world by interweaving equally compelling secondary characters. The hip local bookseller hides a secret that threatens to destroy everything he purports to live for; the king of Hawthorne varsity football hosts parties featuring organic food and unsweetened nonalcoholic beverages, and harbors a few geek secrets of his own; and Sam Lidell, the erudite English teacher for whom Lula carries a torch, carries her own torch for Paul Westerberg of the Replacements. Lula’s mysterious mother, who Lula fantastically dreams of as both hero and demon, makes a bombastic cameo. Brothers is willing—an eminently able—to portray absolutely every character as both saint and monster, to this reader’s great delight.

Typically “literary” readers may rail against Weird Girl’s slanted-decidedly-positive ending. Regular readers of YA will close their eyes, lean back, and relish the satisfaction of finishing a good story, well-told. I only recommend you read this one, whatever your usual preference, in the light of the popular aphorism (which, if it’s not already a thing, should be tagged #LulaandRory): virtually everyone you meet is fighting a battle you know nothing about. Be kind. Always. 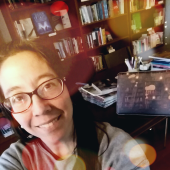