The Tunnel of Love – and Life

Ilike the Boardwalk best when it’s abandoned. Today, I ambled down there during my lunch break to breathe a little salt-saturated Santa Cruz air. Lost in thought, I passed the antique merry-go-round, but an organ melody brought me back. It came from one of the two gorgeous Wurlitzer jukeboxes that continually serenade the wooden horses. I stopped — not just because I was surprised to see the ride open so early in the day, but also because I recognized the tune as the organ line from Rogers and Hammerstein’s Carousel. However, it wasn’t that association that stirred an emotional resonance for me; 1940’s musicals don’t often alter my mindset. Its impact came from another song — “Tunnel of Love” by Dire Straits — a brilliant eight-minute carnival ride of a ditty off of their 1980 album Making Movies. The Carousel melody line is deftly woven into its beginning, lending the whole piece a somewhat eerie feel — especially for a tune that you think is going to be a love ballad.

For me, the eeriness of this song is exacerbated by the fact that “Tunnel of Love” has always reminded me of my friend Mark. In addition to being housemates once upon a time in 1990’s Marin County, we were musical soul siblings – genetically unrelated family members connected by catchy hooks and moody bridges. Mark chose to leave this world a little earlier than I would have liked him to, in a manner which emotionally eviscerates me every time I think about it. As a result, remnants of banter-laden conversations and a couple of old photographs are all I still have of him.

I know for a fact that Mark and I had dissected “Tunnel of Love” in much the same way my high school French teacher had taken apart Baudelaire poems. Some folks might question whether or not this piece is worthy of that kind of close reading, but we certainly didn’t. We first heard the song together in the Mill Valley Laundromat. We spent a lot of post-work evenings in that dingy space with its popcorn ceilings, so it’s easy to recall what Roy Bittan’s tinkling keyboard and Mark Knopfler’s piercingly familiar guitar sounded like through the tinny little speakers. No doubt I stopped whatever I was doing – as is always the case, still, when this song comes on – and told Mark how much I adored it.

He did too, it turned out. He loved what he called its “carnie-ness.”  I remember him talking about the opening lyric, admitting that he had no idea what it was about:

I didn’t either. And I still don’t. Six blade? Switchback? Torture tattoo? We agreed that, like the carnie lifestyle, the line was edgy and sketchy and alluring all at once, if also hard to fathom.  Underneath that line, the melody kicks in, building the song’s unmistakable momentum. Mark compared it to one of those rides where you’re absolutely sure it’s going to get dark and scary – the kind where part of you wants to get off, part of you wants to stay on, and all of you knows you’d better hold on for dear life. He was a decade older than I and not exactly the type to take one of his hippie-girl dates to Six Flags. Maybe he’d gone as a teenager. I like to picture him with some other long-haired Baltimore misfits terrorizing the log flume.

I distinctly remember asking him what “one-arm bandit fever” was. Gambling? Pulling the lever to run a ride? Some kind of robbery? I don’t think Mark answered, but he did say the protagonist was “his kind of guy.” A risk taker. A guy who says stuff like “but it’s the life that I choose,” and “I don’t know where I’ll be tonight.” He claimed that Knopfler was recasting the classic rock n’ roll persona as a carnie – a Carpe diem type who brazenly asks the girl to take a “low ride” with him (a non-committal low ride, of course). I argued that the guy isn’t just a player, that he actually wants to and does make a connection, based on these lines:

She’s cut from the same cloth, I’ve always thought.  After all, she’s the one who says, “you are the perfect stranger…baby let’s keep it like this.”

Mark wasn’t buying it. He told me he’d heard some interview where Knopfler had talked about the Spanish City, an amusement park he’d grown up near that held such strong memories for him that he immortalized it in this song:

Although Knopfler’s guy might be making the comment to his companion, Mark claimed, he’s having the memory all alone – the only way anyone ever really experiences a memory. “She’s never gonna get it, and she’s never really gonna get him. That’s just how it is. And she knows it too, don’t you see?”

“She gets it. Hell, I get it. That’s the Tunnel of Love, sister; that’s the whole ride.  It’s awesome, and it’s fleeting. Then you move on.”

“She gets it. Hell, I get it. That’s the Tunnel of Love, sister; that’s the whole ride.  It’s awesome, and it’s fleeting. Then you move on.”  I remember him saying this with the type of finality that ends conversations.

That afternoon on the Boardwalk, as I strode along the pavement in my twenty-year old Frye harness boots, it suddenly occurred to me that Mark did get it. And so do I, now – but in a slightly different way  It’s all in the couple of lines that follow “the keepsake” and “the kiss,” the ones that take place while his potential kindred spirit is walking away for good:

What does make him stay? Why doesn’t he run after her, like every leading man does in every Hollywood movie? Is it fear of pursuing something real, something serious, something committed? Or a deeper awareness that magical moments are really all there is? Or both?

For Mark, I know it was the fear, and I know the fear was real. His decades-long battle with mental illness eventually caused him to second guess his instincts about everything – especially towards the end. He lost what little trust he had in the significance of his life. And he knew – like I do, and like Knopfler’s protagonist does as well – that we are all alone here; that beautiful, transcendent moments are the amusement park rides of life, and they are all we have. At some point, Mark must have stopped having them – or stopped appreciating them – and felt like he had no choice but to get off the roller coaster.

As for me, I’m not much of a happily-ever-after gal. But I’m curious enough to keep stumbling through the open-endedness. So, yes, “something” – respect for beauty, reverence for synchronicity, love of the moment – will always make me stay here on this carnival-like planet,  taking mental snapshots, writing songs, or crafting essays along the way. It’s okay if I do that alone. Maybe that’s the six blade, the switchback, and the torture tattoo, all rolled up into one – although, to be honest, I’m still not sure what that line is all about.

“Tunnel of Love” doesn’t end on the verse where he walks away.  There’s one more:

Right. Of course he’s searching. That’s what we restless folk do.

It’s an addiction really – this pursuit of magical moments. And like all addictions, it takes its toll. At some point, most people decide that they can’t keep up the search for the new and shiny.  They settle into what they have and hold. Or they don’t. We don’t, that is. And we pay the price, which is an endless longing that will drive us towards either death or art.

Art is what we get at the end of “Tunnel of Love” – one more plaintive chorus and then two minutes of incredibly lyrical guitar playing. Knopfler’s solo starts with some beautifully sparse picking, but then it gradually fills in and accelerates, as though he’s propelling us into the future with his resonant sequence of notes. To me, this future feels moody and uncertain, but it also holds out for optimism and rushes onward with passion. I think that’s a future I can head towards, regardless of whether or not something makes me stay. My only complaint about this solo is that it ends too soon, just as it really starts to get going.

I have a vivid memory of Mark twirling in front of the detergent dispenser, hitting the wrong notes, but singing the right words to the chorus:

And the big wheel keeps on burning, neon turning, up above,
and I’m just high on the world, come on and take a low ride with me girl
on the Tunnel of Love…yeah, of Love

That was one of his good days, when he was impish, spontaneous, witty – a joy to be around.  I know he told me then – and many more times over the years we spent together – that there’s just a lot to be high on in the world.  Most of the time, I still believe him.

As I turn back towards the hill that carries me up and away from my own Spanish City of arcade noise and primary colors, I look back once more at the Pacific Ocean on this unsettled day.  The fog is still lingering over the wharf. The waves aren’t that big, but they’re rolling in with regularity.  A couple of kids are texting outside of the seedy falafel joint.  The homeless guys are combing the beach for cans, the wealthy software engineers are walking their miniature dogs, and the street sweepers are spinning sand in the gutters.

And the big wheel keeps on turning… 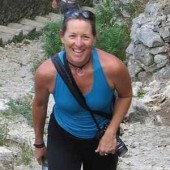 Bridget Lyons is just another embodied soul trying to savor her trips around the sun while attempting to make some sense of what we’re all doing here. A graduate of Harvard University, she is currently pursuing an MFA in Creative Writing at Northern Arizona University while also working as an editor and designer. In addition to non-fiction essays, Bridget has written one and a half novels, numerous blogposts about travel and exploration, and a mountain biking guidebook.