Before ballet class, we crowd around Emma’s iPhone, watching a video of the bad boy of ballet. That’s what Emma calls him, probably because she can’t pronounce his long-ass Russian name. He dances to last year’s number one pop hit in a church, walls covered with flat-looking medieval Mary and Jesuses, wearing only black tights, bulging in the crouch. The girls giggle. Really, you can’t avoid that bulge. The bad boy is known for his tours en l’air. He’s suspended at the top of each leap. Why is he the bad boy of dance? Jill says. She can hardly get over the box on pointe. Emma says, Because he snorts coke before performances. They won’t say it, but I know they want to fuck him. I want to soar like him. Like all that’s holy.

Dad and I watch the local access cable channel. On Dancing with Darla, this dwarf wears a baby-pink kimono and dances to Kate Bush. Long strands of pearls catch on one breast as she gyrates. She’s barefoot and her hips are crooked. Interpretative dance, my father says. The sash of the terry cloth robe he stole from the Vancouver Four Seasons is tied low on his stomach; he hasn’t shaved in a week. He can’t stop laughing. OK, it’s funny, I mean, there’s no way that I’m going to dance like that, can you imagine? But she closes her eyes, as if she doesn’t care about the camera, the audience. Stepmonster #3 floats down the stairs in her Jimmy Choos, wanting to know what we’re laughing at. She rolls her eyes. His wives keep leaving him; he’s not trading them in for younger models. I wiggle my feet in my slippers that look like pugs. I don’t like seeing my bare feet, all deformed and calloused from the pointe shoes. One nail missing. I call my slippers my Jimmy Chews.

In advanced pas class, there are five girls to each boy. We are all doubled in the mirror. Two mes; I’m not satisfied with either. I write corrections in my notebook. The pas teacher doesn’t call me by my name, Rain. He calls me Winter, he calls me Wind. I’m a force of nature, he says. The boys are doubled too by their reflections. Christof, one eye trained on the mirror. Jake, so slender I fear I’ll break him with a touch. Fox, full of grace. The girls orbit the boys. In the high school halls, Fox slides his eyes away from me, although his hands have touched my waist and thighs. When Fox helps me turn, I’m sunlight, blistering his skin where it meets mine.

Dad waits for me in the studio lobby. He tells a group of moms, When I worked on Broadway the dancers taught me how to dance when we were on smoking breaks. Those were real men. Not the effeminate boys this studio likes. The moms are poised in flight, leaning away even as he leans toward them. His shirt strains over his stomach and shoulders. He waves at me and my face burns; I look at my shoes. When we take off our pointe shoes, he leaves the lobby. The lobby fills with the pungent scent of feet.

Dad takes me to this little Italian place on Abbot Kinney. The floors are reclaimed wood from old bleachers, the numbers still on them, and the napkins are black. He orders a bottle of wine for himself. He smells like sagebrush, a plant he calls cowboy cologne. I’m stabbing orecchiette with my fork when the waiters move chairs to let a wheelchair in. It’s a little person with a pearl necklace. Dad, Dad, I whisper but he doesn’t look up from his phone. She’s with an older man who drips money. The waiter serves drinks – a pale pink liquid in a martini glass for her, one wide goblet of blood-red wine for him. I bet that one glass costs more than my Dad’s bottle. I push out of my chair. Dad doesn’t notice. I feel like I’m approaching a rock star. Excuse me, I say. You’re on that show, on cable, right? You’re Darla. She takes a delicate sip, sets her glass down. Those are reruns, she says. I ask for her autograph; she signs the back of a Costco receipt she digs up from her purse. You don’t dance anymore? I ask. My hips. She shrugs. You dance? she asks. I nod. She leans forward. She whispers in my ear.

They’ll Never Name a Sandstorm After Me

A dark red cloud shrouds the horizon of sunset-colored sand dunes. Our tour guide, Rashid, says, No problem. A sandstorm many kilometers away. He motions for the tour group to explore the dunes. I follow Jon, feet sinking into fine sand, flies drinking my sweat. The smudge of darkness hovers in the corner of my eye like grease on the lens of my glasses. I slog up a dune to see an ocean of dunes and really what’s the point? I’m panting. Jon says without turning back, You need to get in better shape. I say, I think the cloud’s getting bigger. Jon shrugs. Trust Rashid. The other couples in the tour group are older, richer, we’ve paid a lot of money to get here, and if we can’t trust the tour guide for Diamond Voyages, who can we trust? A Tuareg – or someone dressed as a Tuareg with a long blue scarf, it’s all theater here – motions us toward the camels but I shake my head. Jon rolls down the side of a dune, makes sand angels like he’s working on a bad metaphor to include in those thrillers he writes. The sky turns blood red. The sandstorm’s a tsunami billowing over the dunes. Rashid suggests that we wait at the café. I look back and a funnel twists inside the cloud; I do not turn to salt. In the café, a kilim hangs over the doorway. A waiter serves us tea in gilded glasses, the gold rubbed off by a history of fingers, hot water packed with mint leaves and sugar, god the sugar, more than I’d ever eaten in a month. The other members of our tour are there, too, drinking tea and eating saltines. It’ll be over soon, says Rashid. Jon says, I’ve got sand in my shorts. He should know that sand seeps into every crack, but I always brought the kids to the beach and flushed sand from them with talc while he stayed at home, his glasses reflecting his computer screen. Red sand fingers slip over the doorway; the kilim flaps. Sand is brittle glass in my eyes. The waiters twist their headscarves over their faces. Are the Tuaregs still outside, scarfs turning their faces blue? I dampen my scarf – brought to wear in mosques, although Jon rolled his eyes when I packed it – with water, wrap it around my mouth and nose. One tourist breathes through a monogrammed handkerchief: ROT. We’re going to die here, the desert is going to get us, stage-whispers his wife. The fingers on the doorway become small dunes; the sand reaches to Jon’s Tevas. The room darkens. I’m so itchy, he says. I can’t breathe. The air is thick with heat and sand; in each glass, sand mounds. It was your choice to come here, I say. It was for us, he says. This time, I roll my eyes. We turn away from the door, from each other. Our mouths fill with sand. 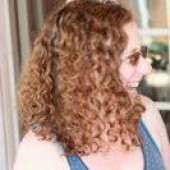 Lori Sambol Brody lives in the mountains of Southern California. Her short fiction has been published in Smokelong Quarterly, Tin House Flash Fridays, New Orleans Review, The Rumpus, and elsewhere. One of her stories has appeared in the Best Small Fictions 2018 anthology. She can be found on Twitter at @LoriSambolBrody and her website is lorisambolbrody.wordpress.com.