She never leaves without an umbrella. The black one with the hand-carved wooden handle, arced for comfortable holding. It’s too big for her small, wrinkling hands. She releases the catch before she opens her apartment door and sticks it out before her, letting it unfold into the day. If it’s raining, the drops bounce off and fall all around her, like she’s the center of a flower wilting in on itself. If the sun’s out, people look at her. They think she’s a vampire, scared of the sun, or just allergic. A prude, a pale-skinned, umbrella-toting prude. She meets their eyes, not noticing the pupils that slit, the tongues that whisper. She keeps her mouth closed.

She continues the twenty-four blocks to work. She doesn’t believe in the subway, not since it happened. That’s why she has the umbrella. It protects her from the sky and what she might see in it. Or what she might not see. She remembers the thick billows of ash, people running from the cloud that sucked the light out of the streets. Faces turned gray, indistinguishable. Gripping a young woman’s elbow, Harry, is that you?

Behind her desk at Stiller & Steele Attorneys at Law, she answers the phone, hoping to hear his voice. It’s Thelma, the client whose voice grates like the steel of the towers, bending, folding in, the screech of emotional collapse. He’s not in, she says, even though he is. She hangs up.

On the way home, she holds her umbrella, the sun set low enough that it hides behind the skyscrapers. Her shadow hunches over with a weight too heavy to carry. She smells fire, the end of a cigarette burning. It reminds her of burnt flesh, business suits on fire. Of her sitting in his recliner, eyes trained on the door knob that gleamed in the street light pouring through the windows. Willing it to turn.

She gets her dinner of cold soup eaten from the can and microwave popcorn and sits in front of the TV. She never watches it anymore. She chews, looking at the empty recliner across the room. Swallow. The only thing she can taste is the soap she sucks on to keep from crying in the shower.

At night, she crawls to her bed, her body almost too heavy to hoist up onto the mattress, even though it lays on the floor. The frame has been ready to pick up from Ashford’s Furniture for two years and three months. She hasn’t forgotten.

She lays with her face pressed into the pillow trying to remember, and when the images come, trying not to. She sees fireballs in the sky, black smoke swallowing everything but the sirens. Ashes flying through the New York streets for weeks afterwards, into the mouths that opened to speak, coming to rest in the filthy subways. Those ashes had nowhere else to go, and they still live there under the feet of commuters, the bums of New York’s homeless. Ashes that captured screams, suffocating howls, jet fuel igniting, “Please deliver me,” “Take care of Linda,” “I’ll do anything.” Bits of lives, burnt and collapsed in on themselves like the towers that came down like metal rain.

Some nights, she rolls out of bed, slips on her Keds, ties her robe around her waist and heads for the door. She grabs the umbrella, releasing the catch, sticking it outside and letting it unfold before she steps out under it. She walks the thirty-five blocks to Ground Zero, never once looking before she crosses the street. Her breath in the night looks like dust settling, her feet walking through drifts of snow. Like walking over dead bodies.

She wanders the memorial fountains, the sound of water spraying. Bodies hitting the concrete. Blood spattering. She finds it in the dark, the one that survived. The Survivor Tree. She looks up in its bare branches that stretch into the night like dead fingers reaching. Like the smoke. Reaching.

Her umbrella falls from her hand, hitting the ground like her body did after the second tower fell. She thinks she sees an arm in a tweed suit, the one with
patent leather elbow patches.

Harry? she whispers, trying not to see the sky bleeding through the branches. Is that you? 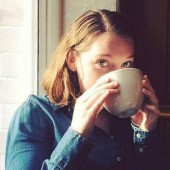 Sarah Wilkinson studies at Champlain College in the undergraduate Professional Writing program. She's been published in several literary magazines and is the nonfiction editor for Halfway Down the Stairs. She voraciously reads memoirs, looks forward to writing more than anything in the world, and advocates for those, like herself, who suffer from Interstitial Cystitis. She resides in both Burlington, VT and Richmond, VA.