Before the tragic donkey accident on his fifth trip to the Holy Land, my father, the former Bishop of the Central Iowa Synod of the Evangelical Lutheran Church in America (ELCA), took me aside and gave me this advice.  “Matthew, you need to find a parish vacated by a head case or a heathen.”  His point was that I would look good in comparison to the prior pastor.  That was how I came to serve at All Saints Lutheran in Altoona, Iowa.

Reverend Judson Zelinka, the former pastor at All Saints, had convinced the congregation that he was a decorated ex-Iraq War fighter pilot.  His supporters attributed his ignorance of the fundamentals of flight to post traumatic stress and a head trauma sustained while moving into the parsonage.  He was 6’ 5’ and hit his head on a low-lying furnace duct.

In his final sermon Pastor Z announced that prominent members of the personnel committee had succumbed to sins of the flesh in the nave.  The head church teller, he said, had financed his birding trip to Costa Rica with money from the World Hunger Appeal.  The church secretary, he claimed, was harassing the Sioux County Conservation Board because of oppressive deer hunting restrictions.  The chief usher, who Pastor Z hinted liked to be spanked, finally pulled him from down the altar where he had climbed to escape the choir.  Pastor Z turned out to be a bipolar former Lutheran Brotherhood agent named Bob Johnson.  Ironically, though, everything he’d said from the pulpit was true.  A schism ensued.

Bishop Borgland, who followed my father as Bishop of Central Iowa, assigned me to interim duties at All Saints after the unfortunate events at my previous parish, Good Shepherd Lutheran in Toledo.  Mary, my second wife, left me for Ruth, the church custodian, and I had started to unravel.  I got caught in a hot tub with the entire Ester Circle after someone at the Quilters Potluck laced the Jello with vodka.  The Good Book says, “Repent ye therefore, that your sins may be blotted out.”  I am a great repenter.

My present position is temporary.  All Saints is awaiting a slate of candidates from the bishop so they can choose their permanent spiritual leader.  The synod supplies this slate, but the list has not been forthcoming.  Bishop Borgland says I’m the perfect interim pastor because I’m noted for creating an immediate lasting impression.  Sustaining piety is my problem.

The congregation’s attitude toward the Bishop borders on hostility.  It’s an old grudge centered on an ex-Sunday School Superintendent and an unfortunate cross-dressing incident at the Synod Assembly.  I give credit to Bishop Borgland for seeing past the lawsuit and selecting me to lead this valued congregation into their next pastorate.  “I did see all Israel scattered upon the mountain, as sheep that have no shepherd”—2 Chronicles 18:16.

“To be a good shepherd,” my father told me, “you need to understand sheep.”  Well, I know sheep.  I’ve been on temporary assignment here for fifteen months.

All Saints has a fine staff.  The new choir director, Peter Petrick, earned a Ph.D. in opera from the Ukrainian Conservatory of Music.  A brilliant man.  We were lucky to hire him.  Why the Red Bow Community College denied him tenure I don’t know.  I’ll admit choir practices were more fun under Millie Teas.  Millie and I were especially close when I first came to All Saints, but she left for personal reasons.  Peter’s detractors say he is a card-carrying Communist.  I tell them that he burned that card.  His knowledge of church music is limited, but the choir is quiet during my sermons.

Peter reminds me of Father, or “Herr Pastor,” as he encouraged me to call him.  Father was very German.  Very demanding.  But he had a soft side.  After a couple steins of homebrewed beer Father did a great Martin Luther imitation, although without YouTube video to compare it to, who knows how good it really was.

Father considered himself a twentieth century reformer, a prolific writer and theorist, but without Luther’s anti-Semitism.  My mother’s name was Katherine, like Luther’s wife, but Mom was never a nun.  She was a script girl and extra in the adult film industry until Father discovered her on a missionary trip to the San Fernando Valley.  Father last performed his Luther reenactment on Reformation Sunday a week before his death.

When I arrived at All Saints, the weak link on the staff was our youth director, Lily Gish.  Her guitar repertoire consisted of “Kumbaya,” “Amazing Grace,” and “One-hundred Bottles of Beer on the Wall.”  She’s now calling numbers at a Mesquawki bingo parlor in Tama.

Our new youth director, Tran Lu, is first rate.  Very charismatic.   The personnel committee knew instantly that she was the person to revitalize the program.  What an intellect!  Fluent in Laotian, French, Russian, and four Chinese dialects.  Some suggest she came to English a little late in life, but she does all right with the Lord’s Prayer.  The Russian is a plus when Peter locks himself in the choir loft with a bottle of Smirnoff.

If I had it to do over again, I probably would have asked more questions during Tran’s interview.  Imagine the committee’s dismay when they discovered she was Buddhist.

As Ethel Banks pointed out, the job description never specified a working knowledge of Christianity.  Isaiah says, “The Gentiles shall see thy righteousness.”

The kids love Tran, especially the older youth.  Her inexperience with children turned out not to be a problem.  The rumor about communion practice during the last lock-in proved totally false, even though three jugs of wine are missing in the sacristy.  We hope to baptize Tran by Christmas.

All Saints has always reached out to the special case, the hard to place, the person in need.  Father despaired after my turbulent youth.  He later acknowledged the ministry was my calling.  “Show forth the praises of him who hath called you out of the darkness,” he quoted at my ordination.

I have a weakness for the sacrament of marriage.  I’ve been married twice, and I’m staring down the barrel of number three.  The first marriage happened before I got to seminary.  Some might have considered it a mistake, because we were so young and all.  But Eve was a soul mate.

We met on a mission trip to build houses for Native Americans in Las Lunas, New Mexico.  My probation officer had recommended it as part of my community service.  He felt the community would feel safer with me out of state.

Eve and I became engaged while digging septic fields on a humanitarian mission to Xela, Guatemala.  When her folks gave us two thousand dollars for a honeymoon in Maui, we kept enough money for four days at the Muscatine, Iowa, Holiday Inn and donated the rest to Lutheran World Relief.  We wouldn’t have seen much of the Maui scenery anyway.  Eve had saved herself for marriage and hadn’t realized what she’d been missing.

Eve died two years after I was ordained as pastor at Interstate-80 Lutheran.  The whole congregation loved her.  What God-fearing soul wouldn’t?  She directed the children’s choir, taught third grade Sunday school, and visited every prayer circle once a month.  She baked raisin cookies for the coffee hour after the 8:15 service and made Swedish meatballs for every potluck.

No one was surprised when she agreed to donate a kidney to her older sister, Ester.  I’d always loved Ester, though not exactly as a sister. It never occurred to me that Eve would be taken from me.  She had an averse reaction to the anesthetic and they lost her.

My second wife was a twenty-year-old member of my next congregation, St. John’s.  She was pregnant at the time.  It wasn’t my baby; the blood test proved that.

God enjoined me to love and protect Mary and her child, so I married her.  On our first anniversary, she spoiled a very nice meal at the Olive Garden by announcing she was pregnant again.  I interpreted her subsequent miscarriage as a sign from God, like something from Revelations but without seven sets of wings.  When she ran off with Ruth, our custodian, it took me totally by surprise.  Prophets get no respect in their native land.

My fiancé is Francesca, the organist at All Saints.  She is a skilled instrumentalist.  I recognized this the night I stayed late after confirmation class to hear her rehearse.  She threw her whole body into “A Mighty Fortress is Our God.”  I was reminded of the words of David, “He will fulfill the desire of them that fear him.”  It was inspirational to watch her hands fly across the keys while her nylon-clad feet danced on the pedals.

Her talent was God’s gift.  The personnel committee knew that.  They did miss the fact that she had no prior employment record in this country, and now we’ve discovered she can’t be paid because she has no green card.  We’ve channeled some cash to her from the loose offering, but she needs a long-term solution.  I am the vehicle of her deliverance.  She has a wonderful laugh, especially when I try out my high school Spanish.

Francesca is good with my son, Sam.  My last girl friend, Delilah, said he had pk (pastor’s kid) written all over him, but I know he’s just a plain kid.  The oatmeal in the baptismal font could have been put there by anyone.  And I am teaching him the value of repentance.  We are told in John, chapter 5, to “go and sin no more.”  That’s tough.  How do we do that?

Our Lord said to the people when they attacked the harlot, “Let him who is without sin cast the first stone.”  Christ wouldn’t say that today, not to my parishioners.  They’d be muscling for a front pew so they wouldn’t have so far to throw.

What I’m trying to say is All Saints may not be perfect, but we understand the essence of Christianity.  Christ befriended publicans and sinners.  He ate with tax collectors and whores.  He told us in Matthew, “They that be whole need not a physician, but they that are sick.”  Exactly, exactly.

I play the role of Saint Matthew, or sometimes Saint Thomas, but not Judas.  Never Judas.  “Resist the devil, and she will flee from you.”–James 4:7   Even when troubled, there is never betrayal in my heart. 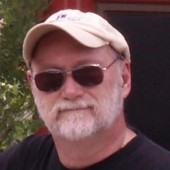 Paul Lewellan has published over fifty short stories, including fiction in South Dakota Review, Big Muddy, Word Riot, Porcupine, Timber Creek Review, The Furnace, and American Polymath. He just finished his third novel, Casualties, about a school shooting on the anniversary of Columbine. Paul is an Adjunct Instructor of Communication Studies and Business Administration at Augustana College in Rock Island, Illinois.