Bobby asked me one more time. “You’re sure this isn’t devil worship?”

“I’m sure,” I said, trying to sound confident. “Hey, do you believe in the devil anyway?”

We were both afraid to answer.

Bobby was so relaxed at school. He would answer questions in class and it never seemed like he had to think about it at all. Perfect answers just appeared. He wasn’t super popular, but I could tell that when he talked, people paid attention. Even the popular kids.

“How did you learn how to make a Ouija board?” Bobby asked.

“That doesn’t mean it will work,”

Bobby put one of his hands on my bicep. We both played baseball, so I assumed we had similar arms. But his hand on my now-puny bicep reminded me that he had this whole other body, uncharted territory that maybe had little in common with my own.

“I’m in,” Bobby said, confidence returning to his voice. “But we have to ask for somebody safe. Nobody dangerous.”

I think we were both thinking it, but I said it first. “Jesus?”

Bobby licked his bottom lip. “Let’s do it,” he said.

A thrill went through me as I gathered an old piece of posterboard left over from a science fair project. I found the stash of fat, smelly markers and chose a blue one.

“Come to the dining room,” I said.

Bobby had never seen my house before, and the dining room was a little bit fancier than the kitchen table. Plus the kitchen had piles of coupons everywhere, in addition to stockpiles of Campbell’s soup.

Bobby said that I should be the one to write the alphabet since I had seen the movie. I carefully drew the letters, trying not to smudge any I’d just written with my palm.

“So, uh, do your parents leave you alone often?”

“Yeah, I guess. My mom’s really into estate sales and she doesn’t like driving at night, so my dad goes with her if she’ll be gone all day.”

“My parents have never been to an estate sale,” Bobby said, almost dreamily. “I always have brothers and sisters around. It’s hard to even feel alone when I’m by myself in my room.”

I kept forming a letter. “Where do you go when you need to get alone, then? When you want some privacy?”

“I’ll get privacy when I’m older,” Bobby said. He watched my hand move along the posterboard, writing the final YES GOODBYE NO.

“One more thing,” I said. “We need a pointer.” I took a quarter out of my pocket and inked an arrow onto it.

We reached for the coin. There was only enough room for the tips of our pointer finger. The blue arrow seemed alive. I looked in Bobby’s eyes. We were ready.

He took his fingers off the coin and crossed himself. I watched what he had done and repeated it with my own body.

We spoke the Lord’s Prayer, art in heaven, our voices sometimes in sync and sometimes not, hallowed be thy name. Anything to keep us safe as we willed the quarter to move across the alphabet we’d drawn.

We waited a moment and then Bobby started saying Jesus’ name so I started saying it too and our oily fingers on the quarter suddenly sang up to the crucifix we’d drawn at the top of the board. There was no stopping now.

I never liked the cross.

We looked at each other.

“What is your real symbol then?” Bobby blurted out.

“When you were our age, did you ever think about –” I started.

“Don’t ask him that,” Bobby said, putting his hand on the quarter which was moving. “Ask him, oh, Christianity. That’s it. Jesus, what do you think about Christianity?”

People think too much of my suffering.

I noticed Bobby’s hair had fallen in his eyes.

The quarter slipped to GOODBYE, and Jesus was gone from our lives. 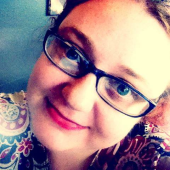 Erin Lyndal Martin's flash has appeared in or is forthcoming in Smokelong Quarterly, Blue Lake Review, and Fiction Southeast. Her longer fiction, poetry, and music journalism have appeared widely.