An excerpt by Andrew Duncan Worthington.

I met Sock for drinks. For lack of a better venue we went to the Applebee’s near the mall. We each had three draft beers: Coors Light for him and Bud Light for me. After we ordered our first drink I asked him how much his was and he said three dollars. Mine had cost four. I wanted to save the extra dollar and switch beers on my next drink, but I didn’t feel like asking the bartender and having a conversation with him, even just a small one, and I also didn’t want to show a lack of commitment in my choice, so I just got the same the next two. Two extra.

The Browns were playing an exhibition game against the Packers. We talked about how it was nice that they were winning.

“But didn’t they win a bunch of preseason games last year?” I asked. “And then they got their asses kicked during the regular season.  They only won two games or something, didn’t they?”

“Yeah, but they had a lot of injuries.”

“They made it to the playoffs a few years ago, almost,” he said.

“I remember that.  They made it a few years before that but got their asses kicked in the first round. Didn’t they have a pretty good record, too, that last time they almost made it?”

“Yeah, they got screw—well, I guess they didn’t get screwed but they almost made it.”

“Yeah, the coin toss or whatever to determine tiebreakers for playoff seeds.”

He was looking at the television across from him, above and between two of the tables. I was looking at the television behind the bartender, in front of the kitchen. It was the first time we had seen each other in two years. We didn’t have anything in common to talk about except for the Browns. I didn’t even really care about the Browns anymore. I glanced over at him, and he looked down at his drink, picked it up, took a sip. He returned his gaze to the screen. I often feel violently angry when people are not able to communicate effectively with me, but, at that moment, I didn’t. I took a sip of my drink.

“I have come to the point of conceding it could be decades before they win a Super Bowl,” I said.

After we had finished our third beer we paid the bill. Outside, I lit a cigarette and we sat down on a bench in the parking lot facing towards the Best Buy and Target across the street.

“What are you home for, anyways?” he asked.

“A dentist appointment,” I said.

“What’s that place over there?” I said. I pointed to the right of Target.

I didn’t really think it wasn’t that weird.

“Supposedly the waitresses are hot and wear, like, no clothes.”

We got in his car and drove across the street to another parking lot in front of Hootie and Hannah’s.

As he pulled into a spot I said, “Fuck this,” and giggled. I wanted to go in, but didn’t want to act like I did. We sat in his car staring through the windows. Not many people were inside.

“What—you don’t want to go in?” I asked. I didn’t really care if we went in but I was starting to have fun.

He pulled out of the parking lot. When we got near my parent’s house I asked if we could stop at the gas station for cigarettes. He said okay. When he parked I got of the car. He got out too and followed me into the store. It kind of annoyed me because he didn’t smoke and never had, but I figured he was going to pick up something else for himself, but instead he just stood by the counter with me as I bought two cartons of cigarettes. One was Marlboro Reds for me and the other was Camel Blues for a friend back in New York. The cigarette tax in the city had been killing me. I said thanks to the cashier, and Sock led the way back to his car. I bought cigarettes that night because I hadn’t wanted to go get them during the day when my parents were awake. They know that I smoke, but if they saw me walk in the door with two cartons of cigarettes, I would probably have to listen to my mom nag me about it in a caring and concerned way constantly.

“You can leave them in here. We can get lunch tomorrow at Taco Bell, like old times.”

So there I was the next day, in front of the Taco Bell with my turning signal on, waiting for oncoming traffic to pass. To the right was a small building lined with different stores. JD Comics and Time Traveler Laser Discs (it kept the name even after the extinction of laser discs) were both still there. The porno shop was still there. The liquor store was still there. Behind them, entire blocks, which used to contain the Route 8 Shopping Center, were demolished. I stared at a dumpster truck that was sitting in the middle of mounds of dirt and garbage. I heard honking and realized it was from a car behind me. There wasn’t any oncoming traffic. I had just been sitting there staring. I turned into Taco Bell.

Sock wasn’t there yet so I stood in front smoking a cigarette. There was a bus stop by the road. A few people were standing under the awning, looking up at the gray sky that was starting to drizzle, then down the road to see if the bus was coming, then up again, then down the road again. I thought about how shitty it must be to have to ride the bus. The buses didn’t come very often and there weren’t many stops along the routes.

As I was finishing my cigarette, Sock pulled up in his car, nodding at me, me nodding at him. I said what’s up. He said what’s up. We walked inside. He told me I could order first. I got a steak quesadilla and two hard tacos supreme. I think he ordered a bunch of different types of tacos. We each drank water. At one of the tables next to us there was an old lady with her Sunday church hairdo. She was sitting with a middle-aged man who must have been her son. At another table close to us there was a family with parents and kids, all in ragged clothes.

“Do you think they’ll ever put anything in there?” I asked Sock, motioning my head towards the vacant lots across the street.

“I have a feeling they will have a hard time getting stores to move in. This area sucks.”

“Oh yeah, you’re a Construction Management major. I forgot,” I said. I had just graduated that spring with a degree in political science.

“Where do you want to work when you graduate?”

“Probably in Columbus or Cleveland. Wherever I can get paid.”

“I probably will end up moving out of Ohio,” he said.

“Because all the bigger construction projects are other places.”

“Yeah, I guess people leave Ohio when they get to our age.  No one moves to Ohio, I don’t think.”

There was a thunder outside. The rain began falling down harder.

“Did you go to church with your mom today?” I asked.

“No. I don’t think either of my parents went, actually. I was asleep, anyways.”

“I think my mom doesn’t really care for the new ministers they’ve been bringing in.”

“And the one who isn’t the youth minister, the other one, he’s pretty weird. He has a really high voice.”

“I pretty much only go on Christmas Eve, nowadays.”

We each took sips of our drink.

“I was talking to my friend Joe, you remember him from high school? We played in bands together.”

“I asked him if he still went to mass sometimes with his mom on Sundays and he said yes, and I said I bet it was out of a feeling of guilt, and he said ‘Yes. How did you know?’ ”

“Yeah, a lot of the Catholic people I know who are our age generally are kind of like that.”

I put my empty taco wrappers in a trashcan. I took a sip of water from my straw, and it made a gurgling.

We went outside. I got my cigarettes out of his car.

“Anyways, you should come visit me in New York.”

He got in his car and I walked over to my car with the cigarettes. The rain was letting up. As he pulled out of the parking lot he hit a pothole and water splashed on the people who were still waiting at the bus stop. 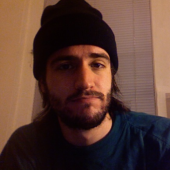 Andrew Duncan Worthington is the author of Walls, a novel forthcoming from CCM Press in 2014, and the founder/editor of Keep This Bag Away From Children.