We Live In Hell I started writing this review in the wake of a literary dustup over one of the most-hyped books of the year. For observers of the publishing industry, this dustup is a case study in how a major publisher with a huge budget, combined with blurbs from Stephen King and Oprah Winfrey, can help a publisher sell a ton of books and drown out criticisms over cultural appropriation. The blurb can move a lot of copies of a book, even in spite of all of its detractors and critics. There may be reasons to hate that book, but the thing I hate most is the seven-figure advance the author got for writing it, while almost everything I write, including this review, I write for free.

Since then, there have been plenty more things to blurb about. The 2020 Democratic primaries have hit high gear, and the coronavirus pandemic has taken over every aspect of our lives. Each of these continue to expose gaps, economic and otherwise, that continue in our society. Our country’s policies have long been racist or evil or oligarchical, but our president has found a way to make them worse. I’m angry about it and feel powerless to do anything.

And so even though I mostly oppose blurbs, I am going to give this review one blurbable sentence:  “Only Americans Burn in Hell is the perfect book to read when you live in Hell, which is, in fact, where we live.”

It was a blurb from Alan Moore that got me to read Only Americans Burn in Hell (We Heard You Like Books, 2019). I related to the title. I wasn’t familiar with the author, Jarett Kobek, although once I started reading I figured out, from the many references he drops, that he wrote a novel called I Hate the Internet, which I had heard of. He was also shortlisted for a Bad Sex in Fiction Award, which I respect.

The book alternates chapters with Kobek, who also serves as one of the main characters, narrating his own life and adventures, from writing an unexpected best-seller to being nominated for a Bad Sex in Fiction Award to attending a transformative Guns N’ Roses concert, and stepping back to tell the stories of a couple Fairies from Fairyland who travel onto the mortal plane and serve as a foil to rich people since “it was an open secret that the acquisition of vast wealth was the quickest way for a human to become a supranatural being.” Once a rich person acquires enough wealth, they pass the Cash Horizon. “Beyond the Cash Horizon, the wealth-accumulating individual was transformed into a supranatural being. In other words, the rich were not human.” Explains a lot.

Another blurb you could make about Only Americans Burn in Hell is something like, it’s a reckoning with the ascendance of Trump – but instead of fixating on Russia or converting the “white working class,” Kobek, turns to Jean Baudrillard, who “theorized that there would be a moment when reality collapsed into fiction, at which point it would then be impossible to distinguish the fake from the actual. He called this the Hyperreal.” Like the Second Coming, nobody knew when the Hyperreal would take over. Enter Trump into the narrative, like a mean-spirited parody of Jesus, who instead of saving our souls, is melting our brains.

As if to channel his frustrations beyond the political, Kobek has written the type of book your MFA workshop would have a field day blurbing on: There are no stakes. The characters aren’t relatable. They don’t change or grow. The plot is looser than the pretext Trump has used for any number of abusive orders, laws, and declarations he’s made.

What saves its bleak and cynical subject matter is that it is often self-referential, incisive, and funny. Perhaps most irreverently, it’s critical of the publishing industry. There is a bit where Kobek is roped into participating in the competitive reading series Literary Death Match, which he describes as “the clusterfuck of debasement that has overtaken writing.” I laughed and blurbed Ha! in the margins, because he’s making salient points about how the writing world hasn’t escaped quantification nor the Cash Horizon, and one of the creators of LDM is Elizabeth Koch, the daughter of “supranatural” billionaire Charles Koch.

Kobek has a lot of the same complaints and grievances as me, especially when it comes to wealth and publishing, such as when he says “Despite decades of effort, and thousands of Internet think-pieces about the inclusion of marginalized voices, publishing was a dirty business that had done nothing to alleviate a system of ghettoizing its authors based on their physical appearances and socio-economic points of origins.”

Basically, if you’re a writer and you want to get paid, you have to, well, live in Hell. 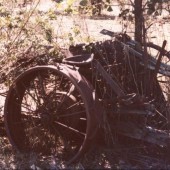 Alan Good has written things that appeared in Timothy McSweeney's Internet Tendency, Bookslut, and The Legendary. You can find him on Twitter TheAlanGood.