We Move Through the World One Place at a Time For much of the climb, the path that leads to the summit of Slide Mountain is strewn with pebbles. Quartz, citrine, sandstone. If you’re a frequent hiker, and if, lost in thought, you begin to drift–in search, perhaps, for a word that captures the way the rock face to your left is wet with new sprung water without any moving water in evidence, or for the way moss and lichens work to slowly tuck the small stones under, or perhaps for the way the rocks, as you climb, increasingly approach sand–you might forget and think you’re miles away, on Table or Peekamoose Mountain, across the remarkable valley that sits between. Slide is what Edward Henry calls a “river of rock … frozen in time.” In his trail notes, he mentions, in an aside you might skip past as easily as you step over an unseen toad as you climb, that if one day the ice returns, the rivers of rock will resume their flow.

The slow, steady ascent toward sky

followed by the jarring return,

we stumble; averted, we

stray; the only constant

It’s easy, on a mountain, to trip over time. The mountains that look, now, like this:

are nothing compared to what was: You can stand for a long time trying to imagine those lost, eroded peaks. If there was once coal here, writes John Burroughs, it was above us–you must look for it now in caves in the sky. The resemblance of now-separate peaks and debris-strewn paths: scars. Enter glacier, exit glacier. You stand on the wreckage, the white quartz ground down into something like sand. Parts of Slide are seaworthy.

Hiking on a day I

you use to evade

an unpleasant task) had to

long & hard if there

wasn’t a way to climb

if anything but me could

I climb Slide Mountain, the tallest in the Catskills, every year on my birthday. For a day it’s the place I move through, sugar maples and beeches giving way to balsam fir, song of the wood thrush ceding to song of the hermit thrush, ceding (if you’re lucky) to song of a Bicknell’s thrush–“a musical whisper of great sweetness and power,” writes Burroughs. When I see my nieces and nephews once a year, I notice how much they’ve grown; each year on Slide, it’s me who’s grown. I move with the I’s that have climbed before. Here, the path was once so thick with ice I clawed my way through hemlocks instead; here, just last year, I scrawled a thought on a scrap of birch bark and left it to the weather: “The mountain is never guilty / of impatience, never / chastises, prematurely, / a son.” Here, the maples, snapped by a late-winter storm, oozed sap as if from wounds.

Turned forty today, climbed Slide Mountain from the west, from the nearest road, letting the car do the first leg. Late-April ice in the shade of rocks and firs. Thought of Basho atop Mt. Gassan in June, finding cherry blossoms under snow: slow blossoms don’t forget spring! From the summit, other peaks–Wittenberg, Cornell–seemed near, within reach; from one of them John Burroughs glimpsed Slide, called it a shy mountain, though it’s the Catskills’ tallest. I lay with my face in the shade of the large rock under which he would sometimes sleep, and slept. Here, he wrote, the work of human hands dwindles. Awoke again to the foliage below and a steady sun. After a while, a scurry turned my head: a chipmunk had found my trail mix, was standing tall with a half almond held high.

I thought chipmunks were

We climb to gaze out, to peer down, but often what we find startles. My notebook is full of such moments:

Thoreau atop Ktaadn: “It was, in fact, a cloud factory–these were the cloud-work … Occasionally, when the windy columns broke in to me, I caught sight of a dark, damp crag to the right or left; the mist driving ceaselessly between it and me. It reminded me of the creations of the old epic and dramatic poets, of Atlas, Vulcan, the Cyclops, and Prometheus. Such was Caucasus and the rock where Prometheus was bound. Aeschylus had no doubt visited such scenery as this.”

Han Shan (The Cold Mountain Poet) on Han Shan (Cold Mountain): “High, high from the summit of the peak, / Whatever way I look, no limit in sight! / No one knows I am sitting here alone.”

Keats on the summit of Ben Nevis: “Read me a lesson, Muse, and speak it loud / Upon the top of Nevis, blind in mist! / I look into the chasms, and a shroud / Vaporous does hide them, – just so much, I wist, / Mankind do know of hell.”

Fujiwara on Shunzei:  “So often I climb /  toward distant blossoms / only to find /  peaks / of white clouds.”

Then, inevitably, the return:

I believe no body can save us, but bodies might; no tree, but trees might. Meanwhile, the woman serving me coffee is flirting with the man beside me, an older, handsomer man, whose smile, unlike mine, has no laborious footnotes. She is, though I asked for no sugar, spooning it in: teaspoon after teaspoon, one for each little laugh she allows herself. When the man turns away, the woman says something I don’t catch–no, Phil, no, don’t ask to have it repeated. Look down, frisk with your change. Trust that the voice, when it comes, comes unmistakably.

The Inferno is a descent, but it ends with a short climb as Dante and Virgil emerge at the end of Canto 34: “To get back up to the shining world from there / My guide and I went into that hidden tunnel; / And following its path, we took no care / To rest, but climbed: he first, then I – so far, / Through a round aperture I saw appear / Some of the beautiful things that Heaven bears, / When we came forth, and once more saw the stars.” That short climb to regain the world has always been as vivid to me as the worst tortures below. We climb to return.

Three days inserting a trowel; three days extracting it. Such careful planting if the heart is in hand. Garlic, pointed just so, and leaves layered, just so. Earth warm to the touch once touch has warmed it. Can I see the steep ascent from here? Or do I feel it in my knees? Yesterday, on the road to the trailhead, just one station coming in on the radio, a preacher: “We discuss and discuss and discuss, while Satan is laughing up his sleeve. What are you going to do?” Later, from the summit, Overlook Mountain clear in the distance, down on its knee, and later still, at the diner, the waitress with a cross tattooed so that it half disappears onto her breast spills coffee onto my eggs. “Oh, oh, oh,” she says, and in that instant I want to be nowhere else. “If we didn’t spill coffee,” I tell her, “this wouldn’t be the world.” This scares her, and we’re quiet as she leans forward to clean up. No one can see my arms as they rise at my side. Gone the hermit thrush, gone its song, but the steep climb remains, and the chickadees, though not until I was halfway down the mountain, well away from the north side. 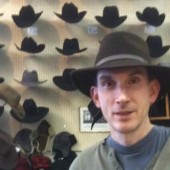 Philip Pardi is the author of Meditations on Rising and Falling (U Wisconsin Press), which won the Brittingham Poetry Prize and the Writers’ League of Texas Award for Poetry. His poems, essays, and translations have appeared in Gettysburg Review, Quarterly West, Cincinnati Review, Translation Review, and elsewhere. He teaches at Bard College.