The Weigh Station is Closed Tonight Sandy sits at Ron’s desk. There’s a hot plate, a coffee maker, a thick stack of manila folders, a small window where she can see smoke billowing out of the oil refinery down the road. Sandy stuffs a piece of Ron’s Nicorette in her mouth. When she throws the wrapper into his garbage can she sees there’s part of a burrito there. When she looks closer at the burrito she sees frosted lipstick smeared on the tortilla. When she digs down deeper into the garbage and finds a piece of paper that says “For My Dearest Ronnie, XOXO,” Sandy dumps out the entire garbage can onto the carpet, rifles through everything, but there’s no more evidence, no more notes, no more burrito lipstick.

The next morning her sister, Loni, calls to check in.

“Were there any women at the funeral who looked out of place?” Sandy asks.  “Anyone who you didn’t recognize?”

It was a small service, 100 people tops. Sandy’s hands shook throughout. It was a windy day and leaves swirled around Ron’s casket as it was lowered into the ground.

“I was focused on you,” Loni says.

Sandy wants to tell her that a good sister should be able to do both, worry about her sibling and keep a diligent eye out for interlopers, but she knows that’s probably the grief talking.

“No one that looked out of place?” she asks Loni. “Maybe standing near the back of the church, wearing too much makeup and crying too hard?”

The Weigh Station is closed, so Sandy parks her Buick LeSabre on the scale. When she’s inside the car it weighs 1,980 pounds. Without her, the car clocks in at 1,854 pounds. No matter how hard she screams or sobs or pounds on the steering wheel she can’t make the readout move more than a pound either way.

Tonight she puts on Ron’s jacket and his baseball hat, flips the sign from “Closed” to “Open” and the truckers roll in.

“Never seen you open at night,” one of them says. “Thought this outpost was strictly a daytime operation.”

Ron always came home smelling of diesel, full with stories of truckers trying to bribe him. He told Sandy he never took their money, that he was too honest, that he couldn’t bear to be responsible for an overweight truck jackknifing into a family of four.

Sandy walks around this guy’s trailer, scans underneath the carriage with a flashlight like she’d seen Ron do.

“Did I pass?” the trucker yells down from his window.

“I know I’m overweight,” he says, “but my boss told me if I didn’t make this trip I should start looking for a new line of work.”

She climbs up on the metal step outside his cab, grabs a candy bar that’s resting on his dash and puts it into her coat pocket.

“Give me your wallet,” she tells him, and after he hands it to her, she takes two crisp twenties that are inside.

Sandy makes $220 dollars over the next hour and then she flips the sign from open to closed. She goes inside and sits down at Ron’s desk, pops the last of his Nicorette into her mouth. When she’s about to leave, a car pulls into the lot. Sandy runs outside to see if it’s finally her, Ron’s lover, thinking that maybe she also drives out here when she misses him.

It’s not. It’s a man who has stopped to piss, shocked to see Sandy standing there.

It’s starting to snow now, big flakes, the first of the year. Sandy slides the key to the weigh station off her key ring and chucks it over the man’s head into the tall grass and then she gets into her car and drives back home. 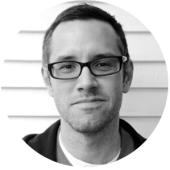 John Jodzio's work has been featured in a variety of places including This American Life, McSweeney's, and One Story. He's the author of the short story collections, Knockout, Get In If You Want To Live and If You Lived Here You’d Already Be Home. He lives in Minneapolis.