Rachyl was gorgeous, so Greg excused in her way too many things, like munching in this cavalier manner, slouched in the chair, flecks of potato chips snowing onto her Juicy Couture.

“He’s a sign,” Greg said of the man she’d dubbed “Side Sack Whack,” who’d passed the diner window for the third time now. Lowering his voice, eager to be ominous, Greg said, “Like a ticking bomb.”

Rachyl nodded a few times, well past the limit of her attention span, then lifted blouse to mouth to vacuum the crumbs of potato chips.

“I’ve got a better angle.” Bashful hadn’t worked for Greg these last few weeks, so he’d been trying on audacity. It didn’t fit, of course—too tight in the figurative crotch—but he was not going to endure the further embarrassment of taking it back.

On cue, Side Sack Whack—almost sporty in fleece and a cream colored baseball cap, a leather bag loose around his neck—ticked by the window again.

Greg clung to a smile just long enough to keep Rachyl thinking she was funny. Then he looked back down at the Crux, where the police blotter listed other Whacks who’d been doing their best to add to the gritty charm of this urban university. Three muggings, two physical assaults, a drive by shooting, an attempted rape in the last ten days—and all within the so-called “Bubble,” the commercial thoroughfare between campus and town. “Travel in groups,” the article advised. “Let friends know where you’ll be.” “Be aware.” “Look like you know what you’re doing.”

While they were at the counter, adjusting book-clunky backpacks and waiting for some change, Rachyl said, “When he comes by again, grab his bag and see what’s inside.”

“Are you out of your mind?”

“It’s the middle of the day. We’re in The Bubble.” Rachyl patted him on the cheek. “Think you’ll be okay.”

If audacity was too constricting, then pusillanimity fit him like a pair of Sunday morning sweats. Greg reddened, a mixture of embarrassment and anger. How many hours had he wasted in this diner today? Two? Three? Lattes, hummus plates, slices of raspberry cheesecake—how many dead presidents had he kissed goodbye over the last few weeks in an effort to open her up?

Outside, Rachyl tucked silky hair under her knit hat. She bit her lower lip. She donned pink mittens and rubbed her straw mushroom nose. The whole point, Greg thought through gritted teeth, was to be adorable.

“Here it comes!” she sang, pushing Greg toward Side Sack Whack, who strode down the sidewalk, gathering steam, the black leather bag an ominous football at his side. The man looked winded, his mouth gulping air, his pale face glistening with sweat. He looked determined too: hell-bent, terroristic. Across the way, two security guards stood on the pedals of their bikes, heads tilted curiously, hands on hanging radios.

As the strange man passed, Greg chicken pecked at the strap of the bag. That’s when he saw the parted zipper teeth, the yawning void. Greg was taking a course in primitive art, and the blackness reminded him of terrible things: a cave, a world before fire, animal blood smiling against rock.  He dropped his hand and watched Side Sack Whack puff down the street.

“Oh, you have no balls!” Rachyl said, blowing bangs like shrapnel into the air.

Greg reached out to touch her on the cheek, the chin, a breast. It was to be a quick, definitive portent of potency; at that moment, though, Rachyl turned, and his fingers plunked clumsily against her collarbone. The contact felt so good—so right—his fingers came back a fist. Rachyl stumbled into a garbage barrel, face wrinkling like a paper bag. The shouting of guards sounded so much like encouragement that Greg, his mouth agape, lobbed another one. This time, an explosion of tears.

The newspaper in the diner had said, “Look like you know what you’re doing,” and, if nothing else, Greg was trying the advice on for size. 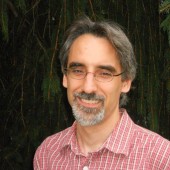 Michael Cocchiarale lives and works in Chester, PA. Some of his other stories may be found in REAL, Stickman Review, Eclectica, Flashquake, and The Dirty Napkin. Still Time, his collection of short and shorter stories, is forthcoming from Fomite Press.